The pandemic that cannot be forgotten
Society & CultureSub-Saharan Africa

Two years into the pandemic, the whole world is looking back to take stock of lessons learned and possible ways forward. While the Western and the wealthiest countries are assessing vaccine efficacy against newer variants and are experiencing renewed hopes for the end of the pandemic, Africa is still lagging behind on both vaccines and the hope to stay self-sufficient. At this stage, however, it is important to question two fundamental areas: First, has COVID-19 been more forgiving in Africa than in the rest of the world, and if so, why? Second, given the meager vaccine supply, how can the rollout be brought up to speed? Regarding the first question, the world can draw a lesson linked to potential further waves and new outbreaks; for the second question, a link might be made in how the continent might break away from traditional aid patterns.

Contrary to common perception, the fourth wave, which has been mainly driven by the Omicron variant, did hit Africa. But while Coronavirus cases are surging at the fastest rate ever, the death toll remains comparatively low. In Western countries, a similar picture (high infections, few deaths) has been broadly interpreted with the most-welcomed benefits of the high vaccine rollout, offering great protection to individuals and communities; but then, since vaccines in Africa only reached a mere 10% of the population, why is the continent doing relatively well? 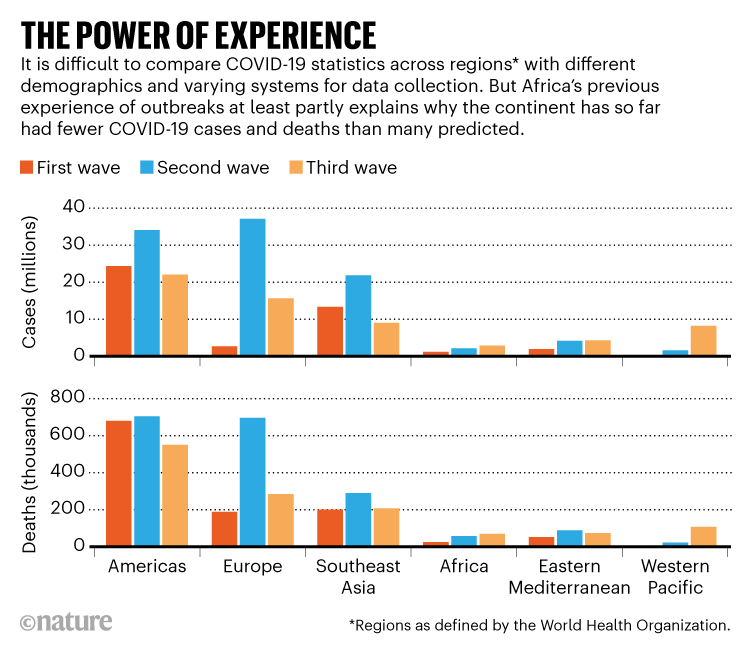 After a six-week surge between December 2021 and January 2022, the curve of infection has now flattened again. “Early indications suggest that Africa’s fourth wave has been steep and brief but no less destabilizing,” said WHO Regional Director for Africa, Matshidiso Moeti. Given the dramatic circumstances of health systems, it seems that the dreadful outcomes that we reckoned two years ago have not quite happened. Data and scientists’ viewpoints back up this perception, hinting that several, transversal and sometimes competing factors are at play.

According to analysts and scientists, the continent’s continuous public health emergencies in the past decades are among the reasons Africa has kept largely afloat of the pandemic curve, with case numbers and deaths much lower than in other parts of the world – again, despite the starting conditions. A few months ago, Moeti praised the readiness of African countries and claimed that they “were very soon able to switch some of this preparedness and address it to COVID-19”. As an example, and despite being a high-risk country due to the growing population, Nigeria is believed to have handled the pandemic reasonably well due to previous public health campaigns, including the use of touchless thermometers during the Ebola outbreak in 2014 and aggressive lockdowns, with harsh limitations of personal freedom, which were key during the first wave. This is admittedly true, though scarce resources, low funds, and weak infrastructures mean that those diseases have persisted in Africa much longer than they should have: will COVID-19 follow these examples?

Others believe that the reasons behind Africa’s unique experience with the pandemic have deeper roots and digging might help us to better fight the next waves – or the next pandemic altogether. One factor of towering importance is demographics. An analysis from the World Bank shows that 97% of the African population is below the age of 65, with a median age of 20 years: the overwhelming majority is at negligible risk of severe disease and death from COVID-19. As a comparison, in the European Union less than 80% are below 65, with a median age of 44 years. 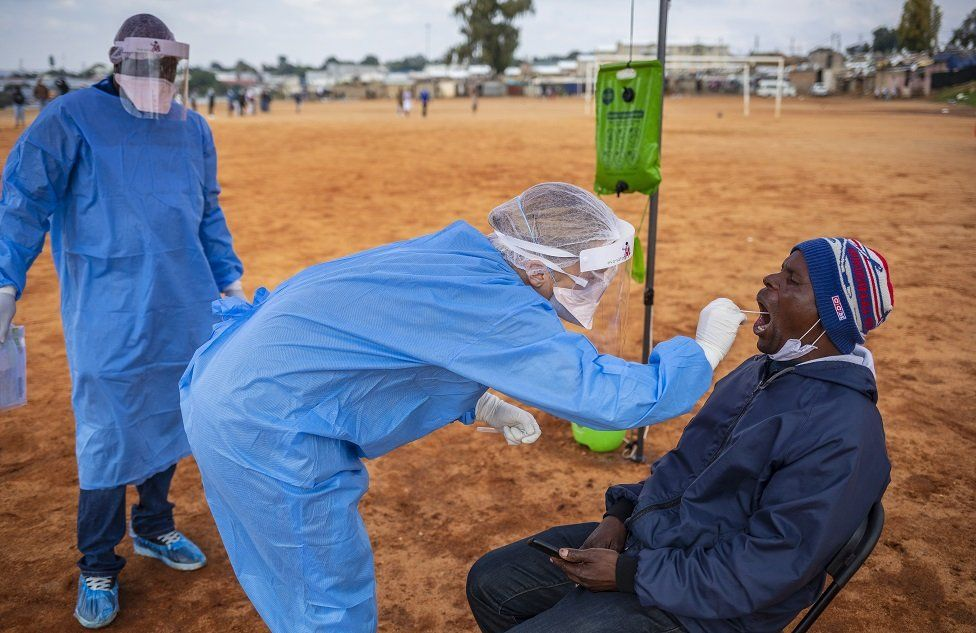 The weight of such factors might have been even greater with Omicron, which brings a higher infection rate, but more forgiving symptoms: further proof that different reasons are at play and that they often interact in a complex system. Whatever the reasons for this, it is worth recalling that just because things are going well, it does not exclude that they could have been better. Vaccine supply is a good reminder.

While the continent appears to be weathering the latest pandemic wave, only around 10% of the population has been fully vaccinated – and it is the wealthiest part. Vaccine supply needs to improve drastically as updated forecasts warn that Africa may not reach a 70% vaccine coverage until August 2024, if the current rate continues. With much higher vaccination rates, the wealthiest countries in the world have learned that vaccine efficacy tends to drop over the span of just a few months, making it crucial to cover the better part of the population in the shortest possible time.

Within the continent there is a diversified picture, with further inequity across and within countries. Some countries brokered their own bilateral deals for vaccines and sit at the top of the table in terms of vaccine coverage, with 17% of the population fully vaccinated in South Africa and 62% in Morocco at the turn of the year. Many countries have set an ambitious target of 70-80% vaccine coverage to reach herd immunity, but the Africa Centres for Disease Control and Prevention claims that just 60% is enough for all African countries by the end of 2022. However, even this lower bar seems out of reach. The WHO had set a 40% threshold before the end of 2021 – a target that was largely left unmet. 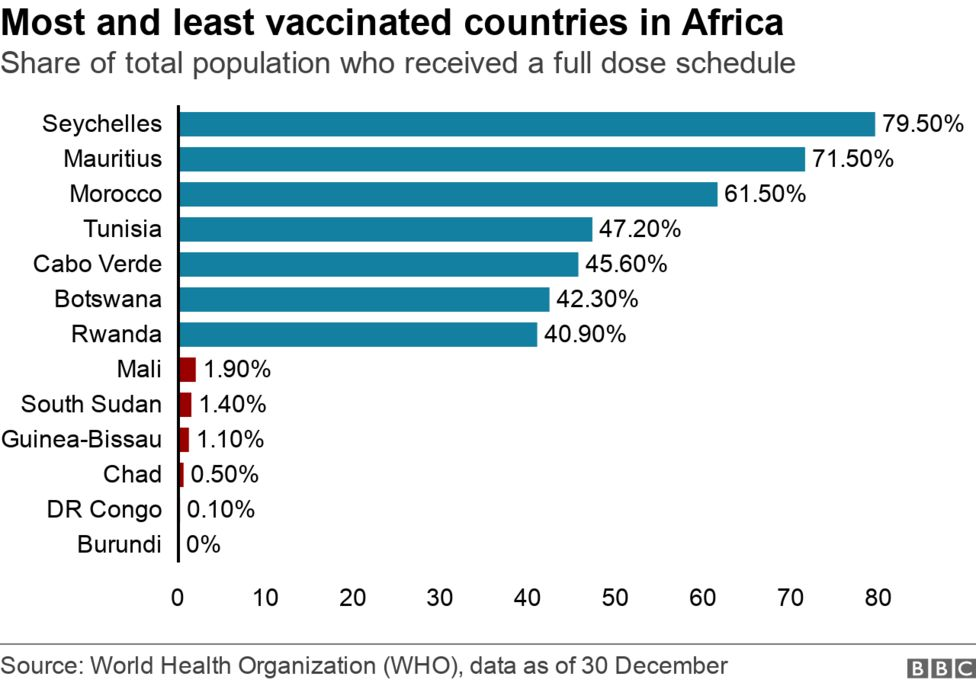 Part of the challenge lies with the fact that the whole continent has been historically importing 99% of its vaccines, even before the pandemic. With the need for vaccines now stronger than ever, some countries – with South Africa sitting atop – are trying to ramp up manufacturing of COVID-19 vaccines (and even other non-COVID vaccines) through the repurposing of already-existing manufacturing plants.

With bargaining power, South Africa is among the countries that brokered its own deals for COVID-19 vaccines, but now it is also increasingly gripping on the use of clinical trials to vaccinate health workers before everyone else. Additionally, the government initiated a private-public partnership to create the Biovac Institute, aiming to develop affordable and quality vaccines for the whole continent and the rest of the developing world. The institute is now working alongside the WHO and the Africa Centres for Disease Control and Prevention to fabricate a COVID-19 vaccine with mRNA technology and Pfizer signed a letter of intent with the institute for 100 million doses per annum.

The attempt to develop autochthonous vaccine technology is a welcome and sought-after consequence. To give a few examples: Egypt is planning end-to-end production of the Sinovac vaccine, while Senegal and Rwanda have announced that, in 2022, they will be able to produce at least one element – most likely enzymes – needed for vaccine manufacturing; BioNTech has reportedly considered mRNA vaccine production in both countries. As a consequence, supply should be brought up to speed. Of course, in-house production does not mean that African countries have the capacity to produce their own vaccines, as production will still be tied to intellectual property and therefore pharmaceutical multinationals. Nevertheless, it remains a major development.

African countries, and particularly those in Sub-Saharan Africa, have shown another – more practical – problem: the inefficient administration of doses. WHO data shows African countries have administered a total of 264 million doses (or 61% of doses received). One of the reasons could well be a practical one: many do not have the means to travel to vaccination sites, that are available only in larger hubs and not capillary on the territory. With these shortcomings, few countries are considering vaccine mandates. Among them is South Africa, which has introduced a vaccine mandate to enter certain public spaces and for certain activities, but the country is more and more an exception in Africa.

Find here our full coverage: The pandemic that cannot be forgotten

Last but not least, most Sub-Saharan countries are facing vaccine hesitancy. Data from a survey, published in early 2021 by the Africa Centres for Disease Control and Prevention and the London School of Hygiene and Tropical Medicine, shows that around one-third of people in the Democratic Republic of Congo would not get a coronavirus vaccine, even if available. The figure was similar in West Africa, peaking in Gabon and Senegal, while in Ethiopia and Niger fewer than one in ten stated they would not get vaccinated. Again, it is hard to pinpoint one single cause for this, as it is a matter linked to cultural and political issues.

The low incidence of COVID-19 made vaccines seem not as urgent as they were in Western countries. Cultural factors, such as traditional beliefs and alternative medicine in the most rural and hard-to-reach areas also have had a significant impact on the rate of people who willingly responded to vaccine calls. Misinformation from public authorities and some key influencers have led to vaccine skepticism too: needless to remind the case of the former President of Tanzania John Muguli who, influenced by a Pentecostal televangelist, denied the existence of COVID-19 in Tanzania on a racial basis, and eventually died in the contagion.

Collective efforts and their limits

As things stand, African countries are clearly not on equal footing if compared to the rest of the world, as the image below shows, but conditions vary greatly also among countries. 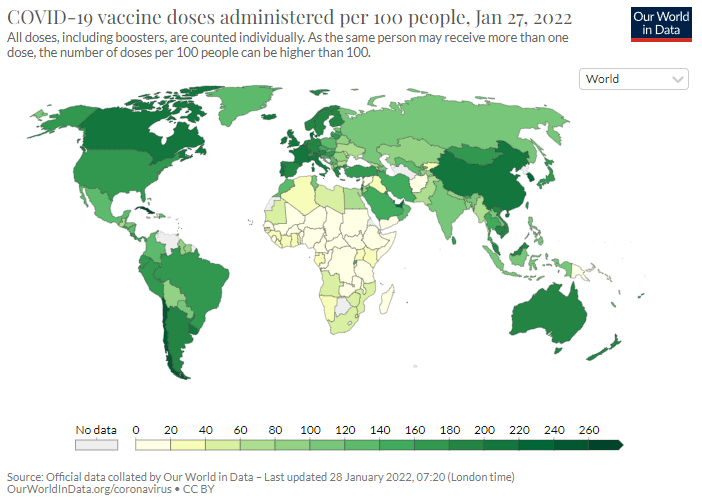 So far, the continent has relied on international aid to survive the pandemic. But, at least historically, efforts to assist Africa have tended to be siloed and informed with a top-down approach. Decision-making often happens outside the continent, not among African institutions and experts. In all areas, the general focus has always been on short-term crisis management, not on making national systems (self) sustainable, which could have helped them take charge of their own health and security. This trend has certainly continued vis-à-vis the pandemic, where external support focused on delivering vaccines, not on building African capacity to produce its own. An inadequate approach, given the nature of the pandemic, which we have seen also in developed countries.

It has been pointed out that, while certainly detrimental in the long run, this dependence on the outside world also hides a lack of confidence in Africa. For instance, Africa’s small successes in the COVID-19 pandemic have not been reported in the mainstream media in a way that could enable the world to learn from them. Instead, the focus is on shortcomings concerning data collection, on intangible and uncredited-for factors like demographics or climate that could explain why far fewer cases and deaths have been reported than epidemiologists and others predicted. This fueled the idea that the pandemic did not hit hard in Africa, contributing to dismissing it as a lesser issue.

Canada’s troubled encounter with street protests and their international echo