The pandemic that cannot be forgotten
Politics & GovernmentSociety & CultureUS & Americas

Canada’s troubled encounter with street protests and their international echo

The day is 17 February. Police pours into downtown Ottawa, beginning a crackdown on the nearly three-week occupation of Canada’s capital by hundreds of truckers part of the “Freedom Convoy.” Several arrests are made, including of the two organizers of the protests, who will be facing charges of mischief. Security forces set up a large “secured area” with nearly 100 checkpoints, where anybody wishing to enter will need a legal reason to do so. Fences and barricades are installed around most federal buildings and the streets of the downtown core. Such an imminent response to the convoy demonstrations paints a widely different picture than the one seen over the last 22 days.

As Ottawa represented the “Freedom Convoy’s” last stronghold, following blockades and shut down of border crossings spread across the country, how did a seemingly intra-Canadian movement succeed at gaining this much momentum and support beyond national borders? 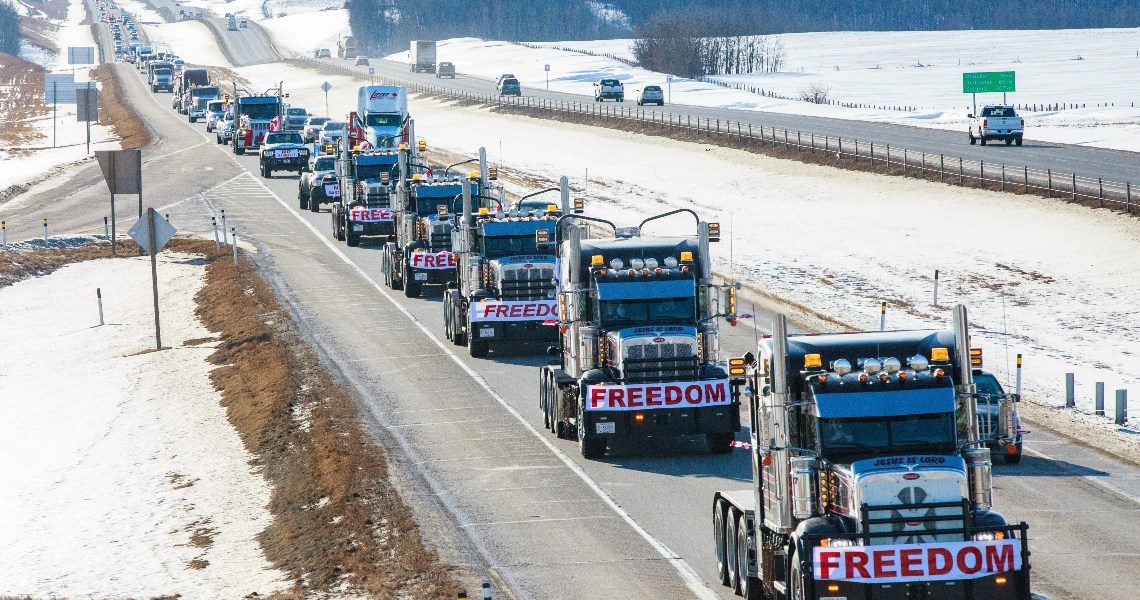 What were the Protests About?

In January, the Canadian government enforced a new federal vaccination mandate that now requires all truck drivers re-entering Canada to be fully vaccinated against COVID-19 or face testing and quarantine requirements. The mandate was not met well by several Canadians and eventually led to the creation of a GoFundMe fundraiser to raise money for the “Freedom Convoy 2022” by organizers. Following this, the first convoys of truckers began to drive across the different Canadian provinces, initially protesting the federal vaccine mandate. As more people joined the movement, the drivers converged to meet and block the country’s capital which they occupied until 22 February. The security threats emanated primarily as the initially peaceful demonstrations rapidly escalated into the harassment, intimidation, and threatening of Ottawa residents and bystanders; the chain-up of apartment buildings; and the display of confederate flags and swastikas. Furthermore, as the movement grew, it also attracted new members many of which having no connection to the trucking industry and whose goals (including ousting Prime Minister Justin Trudeau) were different than the initial motivations of the protests.

In total, over 8 million Canadian dollars were raised in support of the protests. The donors’ names were recently leaked and caused widespread panic in Canada as an analysis of the leaked data showed that the wide majority came from outside of Canada and included government and military members. Overall, 56%  of the funds came from the US, 29% from Canada, while the rest of the donations came from overseas including Australia, Ireland, and the U.K.

Domino Effect of the Pandemic

Although protesters are not necessarily far-right supporters, since its very beginning, the Freedom Convoy has attracted extremist rhetoric and transnational support from important far-right figures which capitalized on the dynamics of the Canadian movement to amplify an international right-wing message. Historically, far-right populism has always been present in Canada but has previously been secluded and constrained in part as cultural polarization is not as prevalent in comparison to other countries. In addition, the structure of the Canadian electoral system legitimizes and empowers party officials at the expense of working-class activists, increasing the difficulty for ‘outsiders’ to win political gains.

While their growth has been slow until now, Canada’s populist movements have gradually increased and are now gaining significant momentum. This is not the first time that Canadian activists have tried to organize these kinds of protests. Back in 2019, they found initial but limited success through the organization of demonstrations in Ottawa which included approximately 100 trucks protesting energy policies.

However, this time around, the magnitude and echo of the convoy’s protests are unprecedented. Canada’s “Freedom Convoy” has had what can be qualified as a domino-effect, where the underlying grievances of the demonstrations combined with COVID fatigue, have found after two and a half years of pandemic, a receptive global audience. Considering Canada, where healthcare is a shared responsibility between federal and provincial governments, each province has been responsible for its vaccination program. Thus, wide level of disparity among the country’s ten provinces emerged where some like Quebec, still in January 2022, had in place curfews versus others such as Alberta, where vaccinate mandates and restrictions have been taken away.

A National Movement with International Echo

Perhaps more surprising has been the timing of these protests, given that several of the strictest restrictions have been lifted not only in Canada, but also in the US and Europe. A major driver for the movement in these countries, rather than solely being vaccine mandates, seems to have been a growing feeling of hostility against the government in power.

Thus far, the Canadian-inspired protests have been echoed in several countries: in France, where demonstrators converged aboard trucks in Paris to protest the vaccination pass; in the Netherlands blocking entry to Parliament; in New Zealand where protesters camped outside the government’s headquarters opposing vaccine mandates; and Brussels. More tamed demonstrations also took place in Barcelona and Stockholm. To a large extent, these protesters’ claimed to be opposing continuous coronavirus restrictions as well as mandatory vaccination while also indicating that they now shared a distrust of authorities over the weakening of their civil liberties.

Find here our full coverage: The pandemic that cannot be forgotten

These kind of movements have loomed over North America and Europe for several years, and to an extent took their roots from the 2018 ‘Yellow vest’ protests (which continued for another year) in France. In response to truckers’ protesting French environmental policies, President Emmanuel Macron gave in to their demands by cancelling the carbon tax and telling protesters he felt their pain. Ultimately what this led to, is showing activists, extremists, and fringe groups, that they could successfully “detain” governments solely through the holding of vehicular protest movements.

The security response to the Freedom Convoy protests greatly varied, specifically from the Canadian authorities versus the others. In New Zealand, authorities arrested over 120 protesters in a matter of three days; French police mobilized 7,200 personnel with armored vehicles and used tear gas, fines, and arrests to contain the movement in two days; and the Belgian police employed water cannons and tear gas to successfully repel protesters in only one day while arresting over 228. In Canada, protesters blocked and occupied the capital for three weeks, before the police began to act. Imminent action was taken only once the Emergencies Act was invoked by Trudeau’s government, which gave power to law enforcement to finally declare the Convoy’s blockades illegal, tow trucks away, arrest drivers, freeze the bank accounts of any donor, and suspend their licenses.

Examining the diverging responses to the protests highlights the wide disparities that exist between Canadian and European policing approaches and contexts. Perhaps the most evident contrast is that the majority of European countries have dedicated riot units that are specifically trained for policing instances of civic unrest. In the case of France, these units date back to more than 90 years and include two distinct national forces of riot police including 26,000 personnel. These have been developed in response to Europe’s longstanding history of street protests requiring crowd controls and are as such prepared and bold in their reaction to public disorder.

In contrast, there is no such thing as a riot police in Canada as the country’s policing system suffers from fragmentation and dysfunctionality. It is the local police (i.e. the Ottawa Police) which is responsible for all matters related to public streets, while the Royal Canadian Mounted Police (RMCP) provides law enforcement at the federal level as it only has jurisdiction over federal property (not streets or highways). Thus, this lack of experience and organization results in both slower responses and outdated, underdeveloped strategies and programs to address civic unrest as well as extremism. This is reflected in part in the Ottawa Police Service board having policies on Indigenous protests and labour disputes, but not retaining any specific policies to protect Parliament. It was also witnessed in the police’s initial respons, when it attempted to deprive the Freedom Convoy of funding through courts order, which were simply ignored by protesters.

A similarity between the two policing approaches seems to be that neither Canada or France, for instance, generally rely or call on the military to patrol these protests. However, in the case of the former, this stems more from a reluctance from distinct provincial governments to ask for military assistance while for the latter it simply does not need it due to the dedicated units for these instances. Furthermore, in Canada, under the Charter of Rights and Freedoms, the intelligence mandate is now under the civilian Canadian Security Intelligence Service (CSIS) whereas it was previously overseen by the RCMP. According to several experts, this has led to lack of shared intelligence between CSIS and the different policing units. In comparison, in Italy, for example, where similar protests were held last December, this is not a common problem. An “Anti-Terrorism Strategy Analysis Committee” (C.A.S.A) was created to hold weekly meetings between the different Italian intelligence agencies and policing forces to ensure the effective sharing of information between all law enforcement bodies.

That is not to say that European police forces are not without fault, as some of the methods employed to deal with public disorder have been largely criticized as well at times for being too violent. However, the intractability of the Ottawa Convoy protest versus ones held in other countries, was in part the result of specific policing decisions and strategies which highlights that Canada’s arrangements should be reconsidered. The country is deeply in need of modernizing its laws regarding demonstrations and the structure of its police forces as over the past few years, this very system has created national security risks on more than one occasion.

For governments faced with protests such as the Freedom Convoy, finding a balance between treating the protesters’ claims as legitimate, viewing them as an important threat, or outlawing them without excessive force is difficult. Nonetheless, it is an incident which requires a response and should have gotten one much faster in Canada’s case. Ultimately, a security response must also be linked to a political one.

In Europe, this was done by the Italian and German governments through official statements and a wide public discourse acknowledging the right to protest but adding either additional proof of vaccination requirements (so that the unvaccinated were kept out of public life) or plans to make vaccines mandatory for all citizens. For three weeks in Canada there was neither, as Trudeau refused to meet with protesters and continuously delegitimized them which only fueled the fire. Had there been a quick political response and clear, transparent guidelines for police forces the situation would not have been the same.

Elisabeth Gosselin-Malo is a Canadian freelance defence reporter covering military procurement and international security of the MENA region. She is a research fellow at the Italian centre TheSquare as well as an Events Assistant at the Institute for International Political Studies in Milan. She obtained her Master’s degree in Terrorism and Political Violence from the University of St-Andrews in Scotland.