The pandemic that cannot be forgotten
Politics & GovernmentUS & Americas

The Latin American continent has been hit hard by the COVID-19 pandemic, both economically and socially. The International Monetary Fund  reported that the region’s GDP declined by 7% in 2020. While in 2021 the region has experienced a modest recovery, many Latin American countries might struggle to sharply return to pre-pandemic levels as their economies rely on external factors such as foreign direct investments, trade and tourism.

Furthermore, the COVID-19 crisis has exacerbated structural socio-economic issues that have historically affected the region. Poverty rose from 30.5% in 2019 to 33.7% 2020. The Economic Commission for Latin America and the Caribbean (ECLAC) estimated that at the end of 2020, the crisis had resulted in 44.1 million people unemployed and 231 million in poverty, of whom 96 million were in extreme poverty. According to a recent survey of the World Bank, the employment rate stood then at around 62%, almost 11 percentage points below the pre-pandemic level. Moreover, the informal sector employs a considerable share of these countries’ workforce. Such workers do not have contractual protection and are therefore the most vulnerable to losing their jobs and receiving inadequate public support. 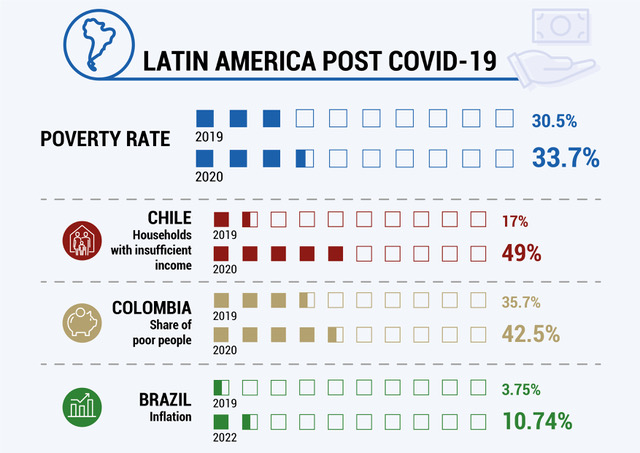 In view of this scenario, the eruption of social protests and of growing political polarization are not a surprise. Even before the pandemic, several Latin American countries were already experiencing social unrest, fuelled by years of stagnant growth and political discontent. The region is at a crossroad. The elections in three of the region’s most important countries provide an opportunity to ponder on how to foster positive growth after years of political unrest and economic stagnation.

Chile’s case is emblematic. Before the pandemic, the country, often praised as a political-economic model for its stability, was experiencing massive protests over low wages, high costs of living and inequality. The (unexpected) 2021 victory of Gabriel Boric, who received more votes than any presidential candidate in Chile’s democratic history, could represent a radical change after a tense campaign and decades of unsatisfaction.

Boric has promised to reform the country, moving Chile away from its free-market economic model. As a first step, Boric has however moved to calm markets and foreign investors, assigning key ministries to well-established and respected profiles – such as the nomination of the former central bank head Mario Marcel as finance minister.

It will not be an easy challenge. The COVID-19 crisis has had a significant impact on Chileans, emphasizing pre-existing structural inequalities. Before the pandemic, it was estimated that the poorest 5% of the population had an income level comparable to that of the bottom 5% in Mongolia, whereas the top 2% recorded an income level equivalent to the top 2% in Germany. According to a UNDP survey, while in the pre-pandemic times 17% of households claimed their income “was not enough” to cover their costs, during the crisis this percentage rose to 49%. The effects of the COVID-19 emergency will be to perpetuate and consolidate existing inequalities in the medium term.

Similar to Chile, this year’s presidential election in Colombia will be set in an extremely polarized country. President Iván Duque has failed to address the deep roots of social unrest in recent years as well as to implement the peace agreement signed in 2016 with the guerrilla group of the FARC. Despite the COVID-19 pandemic hitting the most vulnerable social classes, his government has not tried to mitigate the structural growing inequality, neither proposing a more equitable tax regime, nor increasing public spending to support the poor and mobility. The share of poor people increased from 35.7% of the population in 2019 to 42.5% in 2020, with 15% in extreme poverty. Not surprisingly, Duque’s presidency, according to some polls, has an astonishingly low approval rate (25.1%).

However, the outcome of the upcoming election is unpredictable. Gustavo Petro is most likely to be the frontrunner of a left-wing coalition and, today, he appears to be the candidate to beat. Duque is prohibited from running in the upcoming election due to term limits and the conservative and right-wing parties still have time to find a credible candidate. Nevertheless, whoever will win the presidential election is unlikely to have a clear majority in the Congress, meaning that the next president will face obstacles to implement any significant – and much needed – reforms.

2022 will also be a crucial year for Brazil. The economy has been strongly impacted by the COVID-19 pandemic, in particular the informal sector which represents around 16% of the national GDP and to employs 41% of the country’s workforce. Growing inflation, which increased from 3.75% in January 2019 to 10.74% today, does not help. To counterbalance the negative effects on the population, President Jair Bolsonaro has promoted one of the biggest stimulus packages in emerging markets – nearly 4% of GDP in emergency cash transfers alone in 2020.

It is however not clear how and if the government will maintain existing social protection measures or implement new ones now that the emergency seems partially contained. According to recent polls, if the elections were held today, Lula, who governed the country between 2003 and 2010 and now eligible to run for the presidency, would win with 45% of the votes against the 23% for Bolsonaro. Bolsonaro has been accused of mismanaging the pandemic emergency with an uncoordinated and ambiguous approach that has undermined any attempt to contain the spread of the virus. However, the game is much more open than it seems. Bolsonaro has showed an unexpected resilience and he might surprise as he did in 2019.

Towards a new Latin American consensus

Despite the countries’ differences, the risk for the region is to experience an uneven recovery that will amplify its unresolved economic issues, increasing the political polarization that has recently animated various democracies. However, the elections in three of its most powerful regional players could be an opportunity to promote a new paradigm of development.

Building on this scenario, a group of experts called for a new “Latin American Consensus” among the economic and social actors of the region. To achieve this ambitious goal, Latin American countries must cooperate to foster a common vision on how to mitigate the region’s structural issues – such as low productivity, inequality and a strong informal economy. Until today, Latin American countries have had very diversified models of economic development; now is the right time to find a common path with the aim of maximizing the region’s potential.

Expanding access to social services, more equitable taxation and policies to combat or contain climate change should be the key drivers of any Latin American government. Maybe, the elections in Chile, Colombia and Brazil come at the perfect time to fuel such a vision.