Chile: a call for equality after three decades of frustrated expectations

Observers have traditionally praised Chile as the most developed country and the most stable democracy in Latin America. This is why many were surprised when Chileans rioted in the street of Santiago, protesting a subway fare hike from an equivalent of $1.12 to $1.16 (an increase of around 4%). The government claimed that the raise was necessary to cover for a higher price for gasoline and electricity. Chile is not an energy producer and has recently devalued its national currency, thus increasing the cost of oil imports.

The protest began on October 14 when students answered a call of the “asamblea coordinadores de estudiantes secundarios” to not validate tickets at some stations – even though the price increase would not have affected them as students can access subsided fares. However, access to public transport is part of people’s ordinary life, and the government’s decision clearly fuelled the students’ anger against overall living costs and inequality. 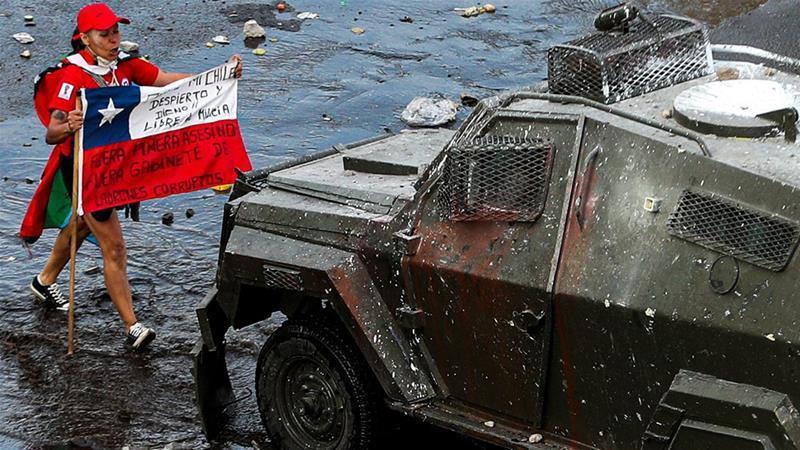 In a few days, protests started to get more violent with clashes with the police and looting of supermarkets and other businesses. The government answered by imposing a curfew in major Chilean cities and deploying the army to patrol the streets. This decision was quite shocking for a country which suffered a bloody military dictatorship until 1990 and in which the last curfew was proclaimed in 1987.

On Tuesday, October 22, after a week of daily street protests, Chilean president Sebastian Pinera withdrew the proposed increase for subway tickets and promised a new agenda to tackle social and economic issues that had been accumulating over decades. But so far, his attempts to quell the protests have failed to appease most Chileans.

Tensions have actually increased bringing an historical demonstration with more than 1.2 million people – in a country which counts 18.7 million – on Saturday, October 26. The police have also been accused of having violently cracked down on demonstrators, and the UN High Commissioner for Human Rights has announced that a team will be sent to Chile to investigate abuses against protestors.

In 2018, Chile had the second highest GDP per capita – around $15.923 dollars – in Latin America. The country enjoyed a 2.7% annual GDP growth between 2002 and 2018. It is widely acknowledged to be the best country for doing business within the region, according to the World Bank, thanks to its market-oriented economy based on a high level of foreign trade and its political stability.[1]

On the one hand, the number of people living in poverty with less than $5.5 per day was reduced from 30% in 2000 to 6.4% in 2017. On the other hand, Chile is still among Latin America’s most unequal economies. In 2018, a study revealed that the income of the richest Chileans was 13.6 times greater than the one of the poorest, explaining the 65% income gap which makes Chile the most unequal country within the OECD.[2]

Half of Chile’s workers earn around $500 dollar per month. In a country in which the health system, education sector and pension system are mainly private, living costs end up much higher for average Chilean people than in many other advanced economies. As a matter of comparison, average consumer prices are about 80% those in the US.[4]

Regarding health access,  a  reform approved in 2005 has introduced a focus on the right to health but Chile’s public expenditure on health is still one of the lowest in the OECD meanwhile out-of-pockets payments are the highest, showing an underfunded public sector and an expensive private sector.[5] Furthermore, although a reform was implemented in 2015 after widespread students’ protests, the national education system is still characterized by a rigid segmentation based on social origin and stratification based on family’s income.

Another example of the inequality problem is the pension system based on individual accounts managed by private funds which replaced the public system in the early 1980s. In addition to boosting investments and savings, this system has created a powerful capital market which today is valued around $170 billion – 70% of the country’s GDP.   At the same time, a great share of Chilean people lives with a retirement benefit of about $205 dollars per month, much lower than the average salary they used to receive. According to some studies, male workers would gain a replacement rate of 38% whereas female workers one of just 28%.

Nevertheless, the faults in the system do not lie in the greedy behaviour of private funds but are rather rooted in a structural issue: employees need to pay at least a mandatory 10% of their salary for their retirement whereas employers do not contribute at all, producing low rates of contribution.

The World Bank advises countries to establish a multi-pillar retirement system to avoid low rates of contribution and retired people falling into poverty in the future. President Michelle Bachelet’s government introduced a reform of the system in 2008, introducing a tax-funded “solidarity” scheme that supplemented the pensions of the lowest income workers. But the effort does not seem to have thoroughly addressed the bigger problem of people’s low retirement benefits.

In contrast to other Latin American countries characterized by high inequality, Chilean governments have appeared unwilling – over more than three decades – to implement reforms which could have really impacted its long-standing inequality problem. This perception is at the root of Chileans’ anger.

President Pinera’s latest promises appear to finally acknowledge the existence of major inequalities in Chilean society. The government is now offering to increase minimum pension by 20%, cut prices of medicines for the poorest and introduce a minimum wage of $480 dollars per month. Despite being widely accepted by the Chilean oppositions as starting points, these proposals should be part of a broader reform effort aimed the country’s socio-economic structure. Short term measure in response to the current protests will be, at best, temporary solutions to problems requiring a deeper cycle of reforms.