The Ukrainian conflict and the long story of energy pipelines

Since the fall of the Soviet Union, Russian energy policy has had a predominant influence on its foreign policy. In the post-Soviet federation, the oil and gas industry have followed different paths. The oil industry has served to enrich a wealthy upper class of oligarchs close to the Kremlin, through the profitable loans for shares privatisation scheme of the 1990s, while the gas industry was never broken into smaller companies and has had one undisputed monopolist actor: the former state-controlled Gazprom.

The gas pipelines to the West, a difficult balancing act

Gazprom’s predominance on the gas market and its interests have been, since the beginning, a priority for Putin’s policy and diplomacy – that is finding profitable routes to export its natural gas into Europe, despite the opposition it might encounter from the former Soviet republics in the Caucasus.

With Soviet-era infrastructure, Ukraine has been one of the most important entry points for Russian gas into the European market. The Druhzba pipeline (also known as “The Friendship Pipeline”) that runs through Ukraine with its 40 billion cubic meters of gas per year, has important hubs in Crimea, in the port city of Odessa, in Kharkiv and in Western Ukraine near Poland. It is one of the longest gas pipelines, extending from Ukraine to Slovakia, the Czech Republic, Austria and Germany. While the old Yamal pipeline brings Russian gas to Europe mainly through Belarus.

Since the fall of the Soviet Union, Ukraine has been at odds with Russia over the contract for gas transit and consumption rates: gas prices in post-Soviet Ukraine were still subsidised and below market value. According to Russia, Ukraine was already benefiting from years of major discounts in its domestic market and negotiations for new tariffs brought the two countries to war in the early 2000s, when the first major attempt by a government in Kyiv to openly oppose to Moscow’s wishes led to the so-called Orange Revolution. Then it happened again in 2014, but the war turned into Russia’s unilateral annexation of Crimea and parts of the Donbass region.

At the same time, from a mere geopolitical point of view, Moscow, at least initially, did not seem to consider the eastward enlargement of the European Union, that started in 2004, as such a threat to its interests as a NATO possible expansion in the same region. Russia has always seen a military presence of NATO, however big or small, at its eastern borders as an undue influence of the United States into its own backyard.

Over the same period, an energy dependent “EU-Russia” in which Germany and Russia would renew their economic and strategic ties has been less and less welcomed by Washington and openly dreaded by Poland and other NATO partners in Eastern Europe. Over the last decade, Russia has always looked for alternatives to its natural gas routes both north and south of Ukraine, like the South Stream pipeline project, in partnership with ENI and EDF, which was abandoned in 2014.

Russia’s response to its difficult relationship with Ukraine and other NATO or NATO-aspiring countries in the region like Georgia, has also been the realization of a northern route: the Nord Stream pipeline under the Baltic Sea (thus bypassing the former Baltic republics) which brings natural gas from the Siberian city of Vyborg all the way to Germany in Greifswald. This project was doubled with the Nord Stream 2 pipeline, following the same route.

Nord Stream became operational in 2018 with a capacity of 55 billion cubic meters of gas per year, thus surpassing the export capacity of the Druhzba pipeline through Ukraine. Nord Stream 2, completed in September 2021, still needed regulatory approvals from the European Union and Germany. Once operational, with its adjoining 55 billion cubic meters per annum, Nord Stream 2 could have cancelled out any threat from Ukraine to block Russian gas transit over its territory.

The certification process suddenly came to a halt on February 22, 2022, just a few days before the invasion of Ukraine. Suddenly, Germany reversed its traditional favourable policy towards Russian gas and the Nord Stream projects. If Europe has had different views on this matter, the US and the UK have always pushed the argument that Nord Stream 2 would have further increased Europe’s dependence on Russian gas and denied Ukraine of transit revenues: thus “making it more vulnerable to a Russian invasion”, according to a Reuters agency report. This is where Putin might have escalated all his frustration towards Ukraine, and the NATO barrage that, in his view, Gazprom encounters on its way to the European market from the Baltic to the Bosporus.

What is at stake for Russia

But why are Russian energy exports so vital to its existence and why have they been contributing to shaping its policy in the region for almost two decades?

In the Putin era, the Russian Federation has always been clear about its energy export goals since they were the one fundamental lever for its growth. Russian GDP had been steadily declining since the early 2000s, partly because the energy sector required a massive amount of investment in infrastructures that would only pay off over a ten-year period of time, provided the certainty that oil and gas would reach profitable markets at the end of the process. Moreover, with an aging population and a middle class that is not well-trained, Russia is not a manufacturing hub, and needs to resort to imports for most goods.

During a short period of privatization of former state companies, a group of oligarchs was creating wealth for themselves first and foremost in the oil industry, adding little to no value to the wealth of the country. One name from this first bounty is the now famous former Chelsea FC patron, Roman Abramovich.

Many economists call this situation “the Dutch disease”: the bad economic output of countries rich in natural resources because they fall prey to corruption and malfeasance in state affairs, and over appreciation of the currency that determines a loss of competitiveness on international markets.

In fact, Russia produces more oil that it needs, but it is not able to fully export the surplus because of logistical and geopolitical issues: a constellation of NATO countries in its way in the Bosporus and inland towards the Balkans that would make the creation of new highways for its barrels less profitable, in light of production costs.

Russia natural gas reserves are immense and give Russia a strategic advance because for years there have been no alternatives to natural gas export other than through the expensive pipeline infrastructures. Only more recently, the technology for liquefied natural gas (LNG) has been widely available but it is still considered a niche industry and LNG comes on the market at a higher price. In the early 2000s, many analysts started talking about a Russian Opec for gas. Similarly to the oil market, there could be a cartel of producing countries in which Russia would have been the major energy provider for the European Union and, at the same time, expanding its influence in the Middle East and the Gulf, tightening its relationship with other gas exporting countries like Qatar. 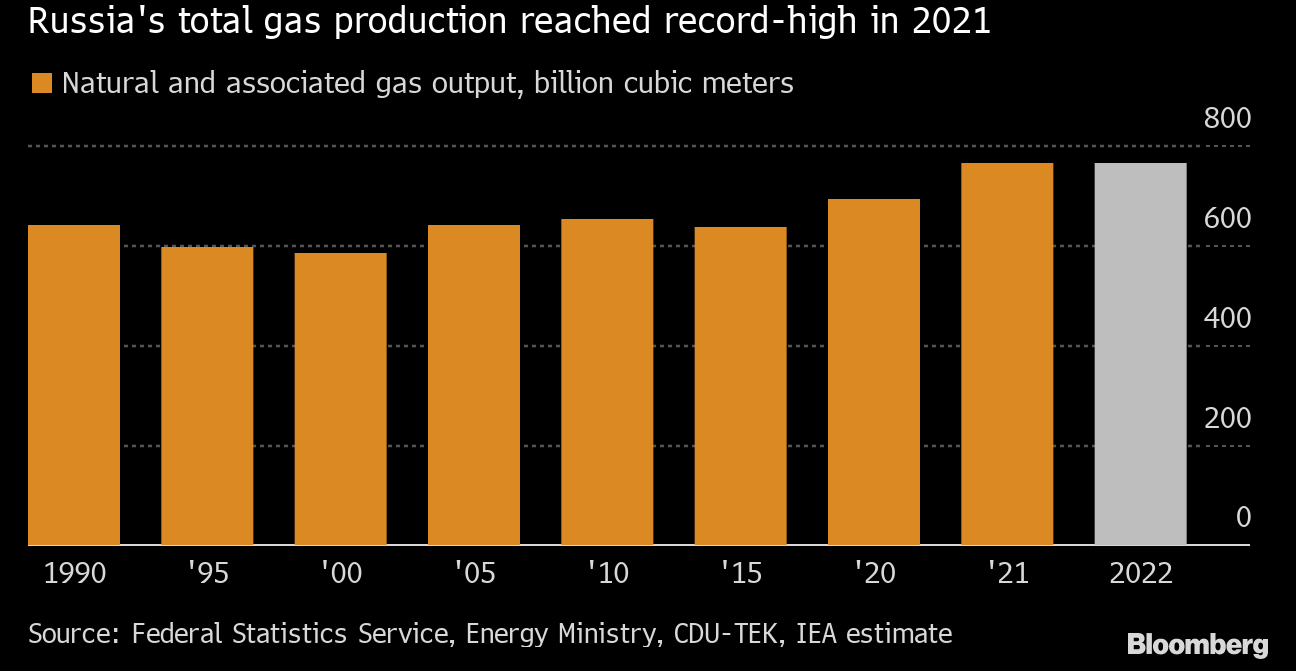 The future of the conflict and the EU

To date Putin has been ruthless in advancing Gazprom’s agenda in the region, and in this light, another conflict with Ukraine would have seemed inevitable despite international outcry and sanctions. With his energy policy as the main driver, Putin has gone to great lengths to find allies in the West, as well as in the East. China is by far the greater export partner for Russia, followed by Germany, Belarus and Turkey.

It is worth remembering that Europe and Russia have found common ground over the energy disputes in the past. The same could be said for Russia’s relationship with Turkey, a well-established NATO member.

In matters of energy security, the United States has always felt strongly that co-dependence between Europe and Russia was a bad thing, while Russia has based its external action on reaching this very objective. Through Gazprom and a small group of state-controlled subsidiaries, Russia has used soft powers in negotiating contracts and tariffs to export its oil and gas towards Europe. This has not been the case in dealing with countries of the former Warsaw Alliance. Between the Caspian Sea and the Baltic Sea, conflicts have often escalated to war.

From a Russian point of view, because of the old pipelines running through their territories, many former Soviet republics were taking advantage of discounted energy prices as a legacy of the past, and at the same time, could still influence its export capacity towards the West. For Russia this was a lose-lose situation. Especially when countries like Ukraine, Georgia and many other Western European countries were going to great lengths to affirm their independence from Moscow.

In this context, the Nord Stream route represented a vital security issue for Russia but a loss of revenues for Ukraine and its regional neighbors.

Nevertheless, in matters of energy security, one key issue that many seem to overlook is that producing countries rarely stand by geopolitical logics instead of profits. In fact, it is in their primary interest to cooperate with importing countries, however at odds their policies might seem. To date, there is no one exporting country that has ever refused to sell oil or gas to political enemies. This is true for Russia’s relationship with many geopolitical actors. One day, diplomatic efforts could bring a modern Russia to redefine its relationship with its Eastern European neighbors on the same level.

Paola Di Fraia is a professional journalist who served as the host of Global Watch (a program dealing with international geopolitics and economics) for the satellite channel Redtv. During 2010-2011, she was a contributor to the Report program and co-author with Paolo Mondani of the book Soldi di Famiglia, published by BUR-Rizzoli.