The electric grid has been classified as one of the largest and most complex machines in the world and ranks first as the “Greatest Engineering Achievements of the 20th Century” by the National Academy of Engineering. Delicately balancing production and consumption of energy, a product that operates at the speed of light with a goal of 99.9% availability or one hour of outage per year, is no trivial effort.

However, the events in Texas in mid-February clearly demonstrate how fragile the management of the grid can be. Studies are underway that will uncover more details about the root causes and mitigating circumstances, informing the development of subsequent remediation and calls to action. However, it is evident from early analysis that there were a series of factors leading up to a compounding set of conditions that resulted in loss of power for millions of customers. 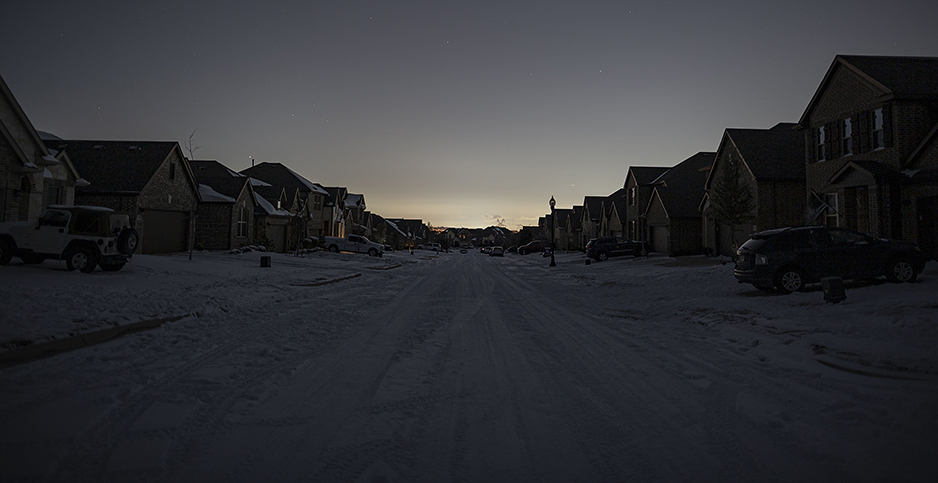 The fundamental cause can be attributed to extreme cold weather that negatively impacted energy production and fuel supply. The same freezing temperatures created a high demand, which exceeded the expected winter peak by 30% and reached summer levels. Temperatures dropped below -8°C during the storm, with wind and humidity that led to perceived temperatures of -17°C on February 15th. Due to the imbalance of supply, the Electric Reliability Council of Texas (ERCOT – the grid operator), used emergency procedures that included rolling brown-out and emergency load reduction measures. At the peak of the shortage, about 10 GW of customer load had to be shed when the difference between total power supply and demand dropped below 1 GW. 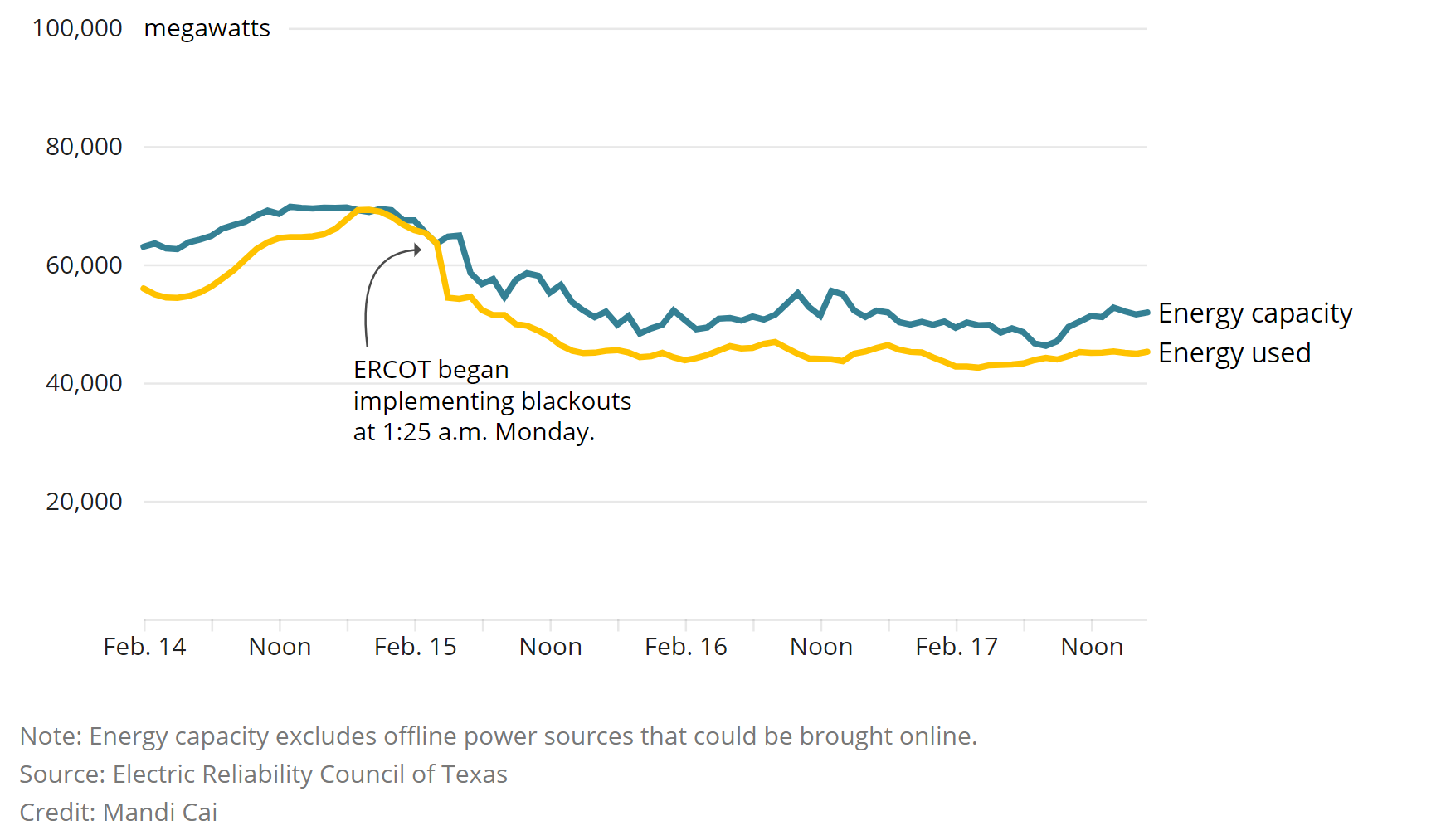 Key underlying issues regarding shortages of energy due to inadequate supply include a lack of proper winterization of many of the production assets, which caused them to operate at reduced capability or to go off-line entirely; limited reserve capacity that could dispatched; shortages of natural gas supply to fuel the primary generation sources; and constraints on what power could be imported into the islanded Texas grid that is unique in the US.

The amount of renewable capacity provided by wind power in 2020 for this market was approximately 25 GW, with natural gas dominating the market with approximately 50% fleet capacity. There was some degradation of wind power during the freeze when about 18 GW of wind power was offline at the peak loss compared to 28 GW from thermal sources; a nuclear reactor in Bay City was also shutdown resulting in a loss of 1.3 GW due to freezing feedwater.

On the demand side, Texas is generally in a moderate temperature zone; therefore, many residential dwellings are heated by resistive units directly or they have heat pumps that require electric supplemental heating when temperatures fall below their rated capability. According to the Energy Information Administration, approximately 60% of the homes in Texas use electricity as their primary heating source and winter demand over the years has been rising, reflecting the growth of both heat pumps and the population. The remaining heating customers use natural gas, which saw a peak demand during this period, which further contributed to the natural gas fuel shortage for power plants.

In addition, the commercial structure in the Electric Reliability Coordinator of Texas is an energy-only market with little or no incentive to operate in the capacity market, thus further exacerbating the lack of standby resources.

Given the open market structure supply and demand pricing, many customers saw their energy bills soar as their typical supply costs rose from $20 to $30 per MWh to the cap of $9000 per MWh for more than 80 hours, resulting in the most expensive week ever in US power markets. The price spikes for many customers represented bills that were 20-30 times their normal monthly supply fee. This situation has driven a specific Public Utility Commission of Texas to conduct studies on Wholesale-indexed Compliance with Customer Protection Rules for Retail Electric Service and a review of ERCOT Scarcity Pricing Mechanism.

In the last decade, Europe has also been repeatedly hit by cold spells, notably in 2012. The first half of February 2012 was characterized by extremely low temperatures and demand reached a historical peak of 557 GW. In fact, in some countries sensitivity of load to temperature is significantly high. Despite prolonged and widespread extremely low temperatures that lasted for two consecutive weeks, no major disruptions in the power sector were recorded thanks to an efficient coordination between electric and gas operators  (technically Transmission System Operators, TSOs).

An efficient coordination between electric TSOs displaced the necessary actions to manage the stressed system: System operators made use of all available control reserves to supply electricity to customers, while maximizing import contributions. Additional measures were also used, including calling for decreases in demand through the media and other technical arrangements to ensure the continuity of supply. All that was possible thanks to strong interconnections between the European countries. A sufficiently high cross-border power transfer capacity turned out to be a key factor in stabilizing the power-demand balance in such a critical situation. To avoid adverse consequences when facing similar events in the US, a full integration of the pan-US power system must be pursued, as already envisaged by several studies that have not materialized in concrete interconnection projects between Eastern, Western and ERCOT power systems.

While the short-term and longer-term remedies are being hashed out at the legislative, regulatory and even judiciary levels, some of the immediate recommendations being instituted are: acting upon best practices for winterization of assets (many of which were outlined in a study done after a similar but lesser winter storm in 2011); improving standards for ensuring essential loads are served; more effective use of customer demand response and load shedding, including one recommendation to use the service disconnect capability that exists in most of the AMI meters in this market; greater emphasis on reliability measures under emergency conditions and; creating a more effective and integrated customer dialogue, especially as it relates to information and measures that are being taken and that can be taken to improve the reliability of the grid.

What are some of the early take-aways and lessons learned? Climate change is happening and severe weather events will be the result. The energy infrastructure must be hardened and made more resilient to these events, resorting also to adequate interconnections between power systems to ensure continuity of supply. Furthermore, renewable energy must be made more reliable through proper precautionary measures (e.g., wind turbines do operate in cold weather conditions) and increased use of battery energy storage should be considered to mitigate more resource uncertainty. In addition, there will likely be many cases in which self-contained microgrids will be implemented to improve the ability to meet high availability goals and reduce risks. Finally, improvements must be made on predictive models to provide better forecasts and anticipate possible remedies.

A look into opportunities and challenges for US decarbonization