The politics of future migration: hoaxes, nightmares and few certainties

In the two largest destination regions worldwide (Europe and North America), unplanned arrivals of migrants and refugees are at their lowest level in years. Nevertheless, on both sides of the Atlantic, politicization of the issue has reached a peak. This paradox is explained by expected future migration trends, not by present ones. This reflects a broader paradox: while the overall capacity of political systems, especially of democracies, to conceive and develop long-term strategies is dramatically decreasing, empirically weak narratives about future migration dynamics exert an ever growing political influence. Real issues, however, exist. In particular, the future of African migration is indeed a source of major uncertainty and legitimate concern, both within and outside the European continent.

What do you mean by “border crisis”?

“We’re talking about an invasion of our country, with drugs, with human traffickers, with all types of criminals and gangs.” With these words, in February 2019, US President Donald Trump declared a national emergency (opposed by the Senate but confirmed by the President through his veto power) at the US southern border.

A few months before, in September 2018, the Italian government unanimously approved an urgent decree on immigration and security (later turned into a law by Parliament) that, among other things, radically downscaled humanitarian protection for migrants fleeing systematic abuse and violence in Libya. In that case too, Interior Minister and Vice Premier Matteo Salvini used an emergency rhetoric, defiantly announcing that, for migrants and asylum seekers, the “fun is over”.

The United States and Italy are indeed situated along two of the deepest fault lines of socio-economic inequality worldwide, where migration pressure tends to concentrate. But, in both cases, narratives of unprecedented emergency are at odds with facts. As shown in the graph below, in 2018, “the number of detections of illegal border crossings [at the EU’s external borders] reached its lowest level in five years” (Frontex, Annual Risk Analysis 2019). The decrease was particularly strong along the Central Mediterranean route, connecting Libya and Tunisia to Italy (-80% in 2018, and a further -92% in the first three months of 2019) – although the recent armed clashes around Tripoli might anytime reverse the trend. As for the US, after an all-time peak of over 1.6 million in 2000, in the last ten years apprehension figures are relatively stable.

Every day alarms about border emergencies and migrant invasions rest upon a deeper layer of more abstract narratives concerning the alleged long-term fate of entire peoples and civilizations. A key role, in particular, is played by the narrative of the Great Replacement. Once confined to marginal milieux, Great Replacement speech is now in the open. Just three years before gaining power, in a radio interview, Matteo Salvini already denounced an “ethnic cleansing operation against those who are born and have grown here […] an attempt at replacing peoples […] that Europe is coordinating.”

The idea that European elites are conspiring to flood the continent with non-European immigrants and to replace their own (mainly) white and Christian peoples with a mixed, rootless and therefore more docile breed is not a new one. For example, it was at the core of an influential 2011 pamphlet (Le grand remplacement) by French author Renaud Camus. Camus claimed paternity of the concept, saying he was inspired by Bertolt Brecht’s 1953 poem (Die Lösung, in which the German playwright sarcastically advised East German communist leadership to “dissolve the people and elect another”). But no intellectual paternity is more doubtful. Historian Laurent Joly credits for the Great Replacement concept to Maurice Barrès, ideologist of the Action Française, a right-wing movement particularly active in France after World War I.

Other genealogies are even less innocent. Austrian author Gerd Honsik, repeatedly sentenced for revisionist propaganda, in an obscure volume published in Spanish (Adiós, Europa: el plan Kalergi, un racismo legal, 2005), traced back the roots of the alleged Geat Replacement strategy to the work of Richard Nikolaus Eijiro, Count of Coudenhove-Kalergi (1894-1972). Austrian-Japanese by birth (but then Czechoslovak and French citizen, after having fled post-Anschluss Austria), Coudenhove-Kalergi was until only a few years ago (scarcely) known as a pioneer of European integration. Even less known was his visionary campaign in favor of Eurafrica, a form of deeper economic integration between the two continents that was formally dropped only in the 1960s, with African de-colonization.

Fraudulently reinvented as the first mastermind of the Great Replacement, Coudenhove-Kalergi is now a celebrity on the web, where his “Plan” has replaced the Protocols of the Elders of Zion as the most popular conspiracy theory. In this case too, it is not an entirely harmless theory, considering that just nine minutes before killing 50 people in Christchurch last March, the murderer sent a pdf entitled precisely “The Great Replacement” to New Zealand’s Prime Minister Jacinda Ardern and about 70 other e-mail addresses.

What we know and what we don’t

In commenting the Christchurch killer’s own version of the Great Replacement theory, Italian writer Roberto Calasso warns that “demography can be pretty intoxicating [as the] last incarnation of Ananke [ancient Greeks’ goddess of necessity], in a world of uncontrollable shifts.” In the words of French demographer François Héran in commenting a book by journalist Stephen Smith (published in 2018 under the sly and somehow misleading title “Scramble for Europe. Young Africa heading for the Old Continent”), “Demography is like music: many are attracted, but few can read a score”.

Indeed, long-term demographic projections have to be taken with more than a grain of salt, but they cannot be dismissed. This is particularly true when they foresee massive transformations, as is the case with the widely disseminated UN projections according to which the African population would double in the span of just one generation. 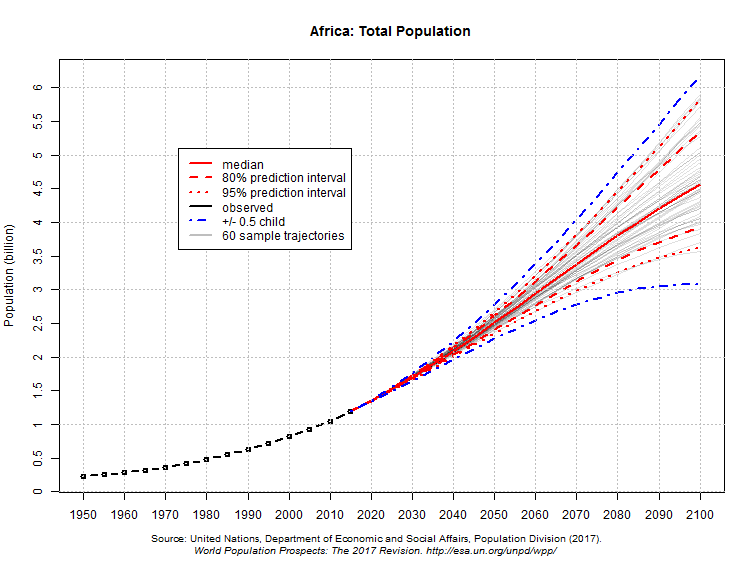 But how will these demographic trends translate into actual migration flows? Few questions in social sciences are currently more frequently asked, but also more difficult to answer. Among recent attempts to draw scenarios, it is worth mentioning the one carried out by European Union’s Joint Research Centre (JRC).

The JRC report contains a wealth of interesting (and often counter-intuitive) information, as when it concludes that “rapid population growth […] goes hand in hand with lower emigration […]. One reason for this might be that African countries with the highest population growth are also the poorest, and poverty limits the mobility of citizens. At the same time a higher number of children […] might also hinder migration. This is particularly true for those who intend to migrate to non-African destinations” (p. 21).

But when it comes to making predictions, researchers can only surrender to structural uncertainty:

“…at the moment there are no signs of an imminent exodus but […] in a medium term perspective both development and demographic factors are likely to determine an increase of migratory pressure from Africa. What is not known is if this migratory pressure will manifest itself mostly within Africa or whether it will ‘spill over’ in international migrations directed in particular towards Europe due to geographical proximity and existing economic and migration ties.”

Growing awareness is not enough

“If there is a crisis in terms of migration, that crisis is in Africa.” If one looks at current stats of out-migration from Africa, it is hard to rebut these words by Peter Mudungwe, member of a team of advisors who are helping the African Union to try to change dominant narratives on African migration.

Growing attention by African governments is certainly an encouraging signal. A Migration Policy Framework for Africa, including a Plan of Action (2018-2030) was adopted recently. The latest Assembly of the continent’s heads of state and government (Addis Ababa, 10-11 February 2019) was devoted to “Refugees, Returnees and Internally Displaced Persons: Towards Durable Solutions to Forced Displacement in Africa”.

Summits and action plans may indeed help in enhancing policy coordination and effectiveness. But much more will be needed to soothe Europeans’ growing anxiety and to give hope to as many as 38% of Africans who consider emigrating and 9% who are “currently making preparations to move.