The urban challenge: How cities adapt across the world
Politics & GovernmentEconomy & FinanceEU & Europe

London struggles with Brexit and COVID-19 – despite the vaccines

Brexit could cut significantly into the City of London’s economy and the capital’s service sectors will bear the brunt of a downturn, according to a study published by the Mayor of London, Sadiq Khan. An analysis by the Centre for Economics and Business Research (CEBR) of the impact on London’s economy due to the reduction in trade with the EU because of the Brexit agreement shows a potential annual loss of £9.5 billion (€11 billion) of GDP.

The political imperatives of Brexit have made the negotiations with the EU exceedingly difficult. There have been three Brexit drivers that have been largely detrimental to the City of London’s interests: First, “Getting Brexit Done”, as was the slogan, by concluding a boilerplate agreement on goods, while neglecting financial services; second, leaving the single market and ending freedom of movement making a deal on financial services impossible; and third, the false and arrogant mantra that the EU needs the City more than the City needs the EU.

The EU is in fact keen to repatriate financial business and to build its own capacity: It sees Brexit as a once in a generation opportunity to rewind the clock 20 years. If the UK had negotiated a more comprehensive deal or a higher degree of equivalence, fewer firms would have moved jobs and activities to the EU or would be planning to do so in the coming months. The EU’s approach appears to be working so far. Amsterdam overtook London as Europe’s largest share trading center in January 2021. The UK’s share of the euro-denominated swaps market decreased from 40% in July 2020 to 10% in January 2021, with mainly New York, Paris and Amsterdam benefiting. This means that the City of London and the UK government cannot afford to be complacent. Over the next few years, Brexit will have a negative impact on jobs, business activity, and tax receipts.

The City of London will have to adapt to the harsh realities of a hard Brexit, perennial tensions with Brussels and growing competition from continental European financial centers and from New York. On a positive note, London’s inherent characteristics are acknowledged as strengths, such as English common law, the time zone, language, flexible workforce, the city’s creative hubs, as well as the skills, knowledge and experience based there. The good and bad news is that the London economy was worth $607 billion in 2018 and the services part of the economy constitutes 85%.

London is also the global capital of education with leading institutions such as Imperial College, University College London, the London School of Economics and Political Science and the London Business School. Education has been a lucrative business with students paying high fees, especially for postgraduate courses. Many students have gone on to work in financial services, consulting, law, creative industries, and other professional services.

There are also signs of resilience and it is noticeable how the view in the city has changed. London has gained a competitive advantage in some of the key growth areas, such as green finance, building upon its previous strong position in growth areas such as Fintech, Islamic finance and the offshore Chinese renminbi.

The UK’s Office for National Statistics has been accused by the Economic Statistics Centre of Excellence of failing to capture that up to 1.3m people born abroad have left the UK between the third quarter of 2019 and the same period in 2020. In London alone, almost 700,000 foreign-born residents have likely moved out, the authors of the blog calculated, leading to a potential 8% drop in London’s population last year. This raises questions over how companies will fill jobs traditionally taken by European migrants. London’s population could decline further with city dwellers moving out of London because of the pandemic and looking for a better quality of life, a smaller number of graduates arriving in the capital due to the rise of remote working, and reduced immigration could also have an impact.

Boris Johnson’s government – still subsumed by the Brexit debate – has also struggled to respond to the COVID-19 pandemic in a timely and adequate way, create a national plan to allocate medical supplies, and coordinate test-and-trace efforts. Johnson refused to heed scientific advice or let professionals lead the public health response. The UK government has an extremely poor record in terms of one the worst COVID-19 death rates in the world, shortcomings of PPE procurement and the expensive Serco Test & Trace which has been less successful than many EU countries.

The only one bright spot has been the UK’s vaccine policy, which has been a relative success especially when compared with the EU’s collective performance. The UK is now on course to be the first major economy to vaccinate its entire adult population. The success has been achieved through strong planning, spending to acquire the necessary dosages quickly and the exceptionally effective implementation by the National Health Service. Over 27 million 1st doses have been given up until 20 March 2021. 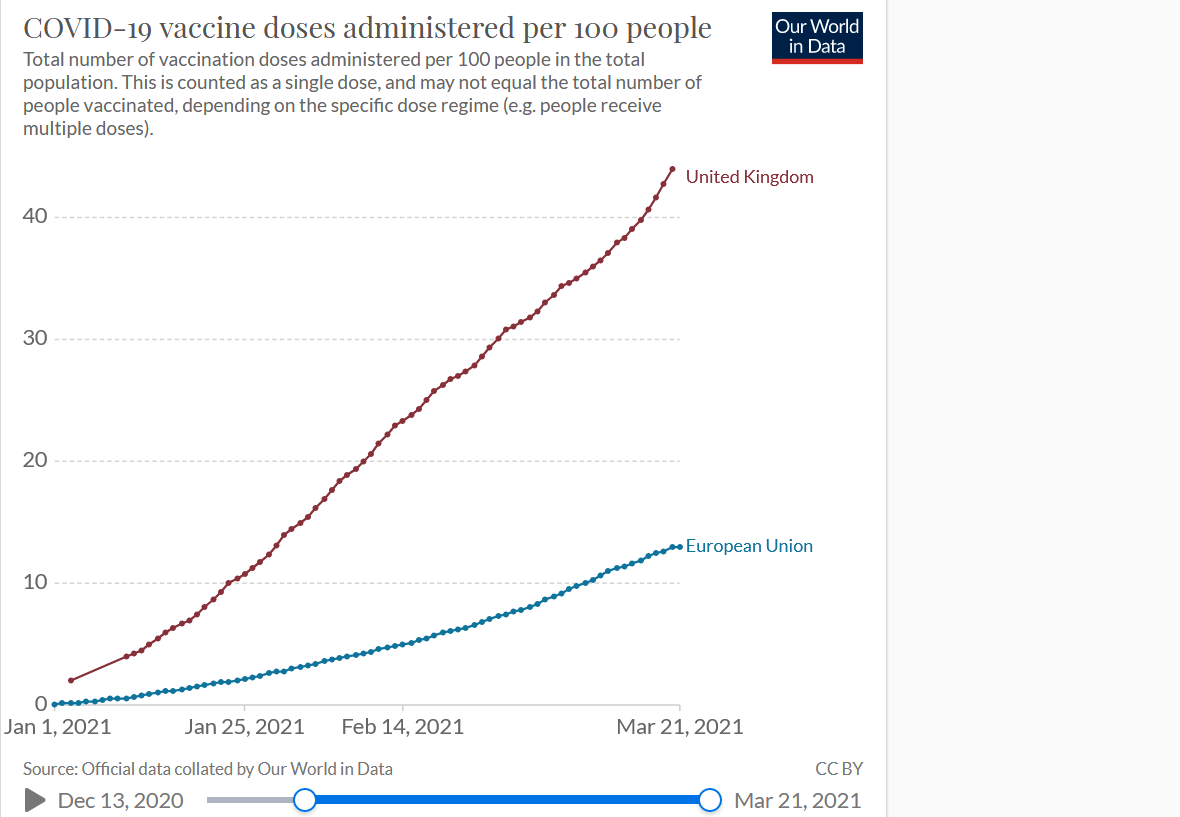 London as a creative center has also been hit hard by Brexit and COVID-19. Business chiefs in London have told the government that “the worst-case scenario has become a reality for the arts and culture sector” after the pandemic wiped out activity in the West End. They have also warned that there is a risk of the near extinction of the sector, as well as the countless hospitality, leisure, retail and tourism businesses that rely on it.

After more than one year of Boris Johnson’s government, his legacy includes 143,259 COVID-19 deaths up until 14 March 2021 due to his mishandling of the crisis and the cronyism of awarding contracts to political friends. Meanwhile, Johnson’s hard Brexit deal is a short-term political victory, but in the long term it will provide few benefits in trade or for the UK economy. Resilience of the London economy will be tested.

While it is difficult to put hard numbers on it, it is inevitable that the combination of COVID-19 and Brexit will negatively impact London and its service sectors despite the success of the vaccine policy in the years to come.

Professor John Ryan is a Network Research Fellow at CESifo, Munich, Germany. He is a Senior Partner at a consultancy which advises private and public sector organizations on COVID-19/Brexit contingency planning.

Lagos: a stress test for urbanization