What does “temporary” mean exactly? It may seem like a matter for philosophers and linguists, but it’s not. In fact, the question is at the very core of the dilemma faced by economists, central bankers and policy makers across Europe, who are trying to wrap their heads – and their budgets – around the energy crisis hitting the continent – and its most feared consequence: a rise of inflation that pessimists think could spiral out of control. Apparently, this is not without reason: in December 2021, Eurostat, the statistical office of the European Union, expected the euro area’s annual inflation to be 5%; meanwhile, the European Central Bank (ECB) raised its inflation forecast to 3.2% for 2022. 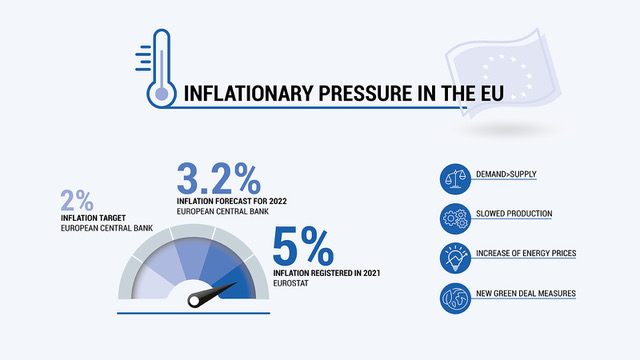 To grasp the magnitude of the news, it’s useful to recall that 5% is the highest rate since records started in 1997 and that Europe has long struggled with an inflation dangerously close to zero – which means, basically, that economic activity is at best very sluggish – while setting 2% as its target.

What’s happening then? After the shock of the pandemic and the forced economic deadlock worldwide in 2020, consumers returned to buying goods and industries returned to producing them, with demand exceeding supply. Bottlenecks and shortages, of both materials and workers, slowed production, while energy prices skyrocketed; altogether this set of factors has driven an extraordinary inflationary pressure. The question then is quite simple: how long is it going to last?

Christine Lagarde, the head of the ECB, has been reassuring for months: the spike is temporary. She explained that it is not structural and it has not been incorporated into the core of the productive forces, such as wages; instead, it is driven by the specific circumstances of the economic recovery after the deadlock and of the energy surcharge. The underlying text is that as soon as production will return to full capacity and winter will be over, reducing our need for natural gas to heat our homes, prices will start their descent towards “normality”.

Lagarde appears to be thinking of a few more months of price tensions, which, in her view, do not represent a problem. But it is legitimate to ask ourselves if she is entirely right. First, and most important, the pandemic is not over yet. Just to make a vivid example: in January, China imposed a lockdown affecting at least 20 million people in an attempt to stop the Omicron variant from spreading in the country, according to its zero-Covid tolerance policy. It is hard not to see how this latest stop – possibly not the last one – will create new supply chain disruptions in the medium term, therefore more spikes in prices. Plus, tensions on the Ukrainian border with Russia are all but easing, with speculations of a military invasion growing every day, hanging between reality, propaganda and economic leverage. Russian President Vladimir Putin has repeatedly shown the world how he can play with the stream of gas directed to Europe, and we know that the continent can’t resume to full production mode without energy to feed its industries, particularly in manufacturing sectors.

Considering all of the above, it’s not so granted, nor universally assumed, that the surge in inflation will be temporary. And the response chosen to face it may dramatically change short- and long-term scenarios.

On the other side of the Atlantic, it took a while for Federal Reserve (Fed) Chairman Jerome Powell to finally admit in December that inflation is not transitory, suggesting that the Fed is shifting to tighter monetary policy, with (at least) three interest rate raises this year. Fundamentals are different in Europe – particularly the job market – and Christine Lagarde has held on to her convictions, insisting throughout that the ECB will stick to its loose monetary policy for at least another year, while gradually reducing its asset purchases. Nonetheless, inside the ECB board opinions on the next moves are not as consistent and shared. Even pretending to ignore that inflation is Germany’s nightmare and that its central bankers are not willing to let it eat into salaries and savings, the spike points to a specific direction, which Isabel Schnabel, the ECB executive responsible for market operations, made clear in December: the green transition “poses measurable upside risks to our baseline projection of inflation over the medium term.”

Reverse cause and effect and here you have it: the transition from fossil fuels to renewable energy may become the scapegoat of the inflation surge, putting the whole New Green Deal at risk. It’s hard not to see the likelihood of the outcome, given that governments need to protect consumers’ disposable income in the short run whereas the transition forces long-term decisions and consistency. A good example of such misjudgment can be seen in the Italian government’s decision to use revenues from the Emission Trading Scheme (ETS) to mitigate the costs of energy for large industries – which means, to compensate for the spike in prices of fossil fuels – quite the opposite of what the ETS are aimed for.

Reacting to the sudden surge without failing on the long-term net-zero pledges is a matter of strategic decision-making, which often conflicts with governments’ desire to show quick results. First and foremost, out of control fossil-fuel prices are the ideal drivers of the New Green Deal, as they make renewable energy more competitive. Yet, green energy is still underdeveloped and it needs to catalyze a significant amount of investments to be able to compete, in terms of prices and quantity, with coal and hydrocarbons: Scotland recently provided a good example when signing contracts worth almost £700 million (€836 million, circa) for new offshore wind farms along its coasts.

Read also: The EU and the new frontiers of sustainability

Frans Timmersman, the EU’s Vice President who leads the Commission’s work on the Green Deal, has repeatedly been outspoken on a simple consideration: if we had started investing in renewable energy earlier, we would not be suffering so much from inflation caused by rising energy prices today. While they keep this in mind for the future, decision makers should also remember the lesson from the 2018 Gilets Jaunes movement (Yellow Vests) in France: you cannot have lower income classes pay the price for a green future. Translated into real terms and money, this means that while sticking to the renewable transition the governments need to alleviate the burden of inflation on families and businesses: real economic help is the only way to convince people that the new ecological paradigm will not devour their lifestyle and bottom lines, which also means preventing angst and anger from feeding a vicious cycle whose only results could be forcing political decisions in the opposite direction of change.

Does this possibly mean spending more? Definitely so. And this leads to the second huge risk of the inflation surge – or, to put it better, of the possible mistakes in dealing with it.

Resisting the orthodox approach to fighting inflation (reducing spending and raising interest rates) is perhaps the greatest challenge the ECB is facing now. It would be, albeit for different reasons, a remake of the unfortunate error of the Great Crisis in 2008-2009, threatening not only the green transition, but the entire post pandemic recovery. The choices of the Fed (which will certainly be emulated by other central banks) must not influence decisions to be made in Frankfurt by the ECB, starting from a correct evaluation of the differences of the fundamentals of the European and American markets. 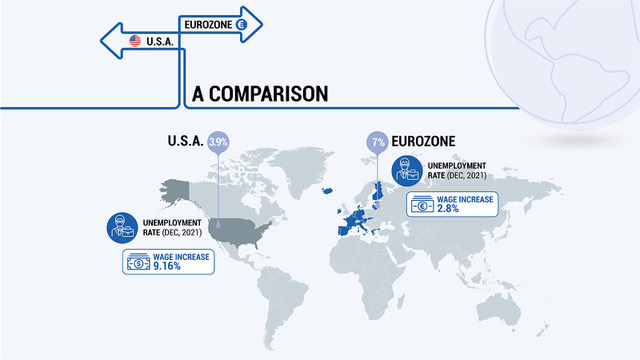 The US unemployment rate fell to 3.9% in December 2021, which is just slightly above the pre-pandemic rate (3.5%) and, more important, is way better than the European figure, at 7 %. At the same time, wages in the United States increased 9.16 % over the same month in the previous year, and economists and analysts expect the raise to continue: this means that labor has leverage and bargaining power. This is not the case in Europe: despite a significant recovery in economic activities in 2021, oil prices rising by half and wholesale prices for natural gas quadrupling in a year will hit both consumers spending and business activity. Families and industries cannot afford a hike in costs for borrowing money, if they are to support the economic recovery. And European governments still need the support of the ECB to keep the bond market calm while rolling expensive programs to restore industries’ capabilities and consumers and businesses’ relief packages.

Extraordinary times need uncommon responses – and extreme clarity in the objectives.  There is no doubt that the pandemic has dragged us into an unknown and unexpected reality: we’d better resist the Pavlovian temptation to navigate it with old, unfit tools.

The impact of China’s economic slowdown on Transatlantic economies