In May, India re-elected Narendra Modi as Prime Minister, increasing his majority and giving him 303 out of 543 parliamentary seats. If the tally of coalition partners is added to those of his own Bharatiya Janata Party (BJP), Modi has an additional 50-seat buffer. The result was 30 seats higher than his own party’s internal estimates. The extent of his success, which included increasing the BJP’s vote share by 6.3 percentage points, raises two questions: One, how did Modi succeed in bucking the anti-incumbency tendencies of the Indian voter? Two, what does the most successful right-wing politician in modern Indian history plan to do with his mandate?

Commentary outside India has tended to see Modi’s nationalistic rhetoric – and an aerial military skirmish with Pakistan in the run up to the voting – as the secret sauce behind the Prime Minister’s win. Surveys of voters, however, indicate a more nuanced reason. Modi can be said to have won for four reasons.

One, and probably the most important, was a series of welfare schemes that provided millions of poor access to toilets, cooking gas connections, low income housing and cash income supplements. While none of these were unprecedented, Modi used a mix of biometric identification and digital wallets to ensure better targeting. Over the five years of his first term, some economists have calculated, Modi paid out two trillion rupees ($29 billion) in subsidies and created more than one trillion rupees in assets for the poor. The BJP’s vote share among the poor, the largest segment of the electorate, jumped from 24% to 36%, even while it retained its traditional support among the middle and upper-middle classes.

Two, Modi was able to portray opposition candidates as lacking his leadership qualities, exploiting polling that showed his approval rating was light years ahead of everyone else. Projecting himself was important as these same polls showed his ratings were about double that of his own party. Almost all journalists who travelled the country and spoke to voters commented on the positive views of Modi they encountered, even among opposition supporters. 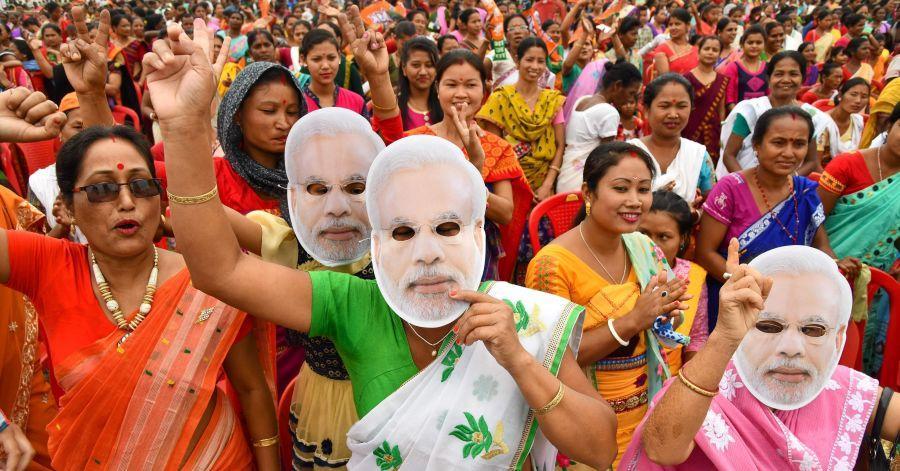 Three, the BJP built a well-oiled electoral machinery that was streets ahead of its rivals. It was a pioneer in the use of sophisticated big data, deployed a vicious but effective social media army, even while maintaining a traditional booth-centered mobilization strategy and ensuring it had overflowing coffers. In each one of these areas the BJP’s primary opponent, the Congress Party, lagged far behind.

Four, the BJP used Hindu revivalism and flag-waving as the masthead of its campaign. Surveys indicate between 4% and 6% of voters were swayed by nationalism, including the airstrike and subsequent contretemps with Pakistan. In an election where a 1% swing could move as many as 30 seats from one column to another, this gave the BJP a crucial edge. Nationalism was important in mobilizing the right-wing base of the party and, to some extent, blunting unhappiness with job losses and slower growth created by some of Modi’s less successful economic reforms.

There were two distinct periods in the first Modi government. Between 2014 and 2016, the Prime Minister spoke about his determination to carry out a root-and-branch removal of an entrenched and corrupt political-business nexus that marks much of the Indian economy. While he did accomplish some reforms, most notably a nationwide Goods and Service Tax, many of his other reforms were only partially or faultily implemented. Stung by a number of state election defeats and a disastrous demonetization exercise, Modi, since 2017, has stressed welfare and social change. The evidence, so far, is that in his second term Modi will turn the clock back to 2014.

With manufacturing growth sagging, the new government has a short-term priority of shoring up the growth rate and restoring the confidence of foreign investors. A planned 100-day agenda has been put together and will include a mix of economic stimuli and reform announcements. However, it is the long-term economic reforms that are of greater consequence. India has a number of problems.

One of them is tackling red ink in the financial sector. A period of over-investment in the power and real estate sectors in the early 2000s has left a swathe of bad loans in the banking system that has choked the credit system. Rather than bailout the banks (the traditional New Delhi solution), Modi wants to use the bad loans issue to break up the entrenched Indian conglomerates who thrived on the incestuous political economy of the past. Cleaning up, restarting the credit cycle and maintaining growth will be his first policy challenges.

Modi has also signaled a desire to push ahead with reforms of India’s labyrinthine labor laws and tax structure, privatize or shutdown the more inefficient state-owned enterprises, and pressure state governments to push reforms in areas like land acquisition and market-based pricing for power. A key economic advisor has announced plans to shut down or sell 46 state-owned firms. Over forty central labor laws will be consolidated into four codes. A task force he had set up before the elections has recommended slashing corporate tax

While Modi sees transforming India’s economy as the most important element of the legacy he wishes to leave behind, he remains at heart a religious nationalist. His commitment to economic change is part and parcel of a desire to restore Hindu civilization to its past glory and influence. His party’s social and cultural agenda will not be ignored. The Hindu rightwing in India believes swathes of the educational system and government cultural agencies are still beholden to the socialist days of the Congress. A purge of such institutions will be a key element of Modi’s second term.

Another BJP bugbear has been the special constitutional status of India’s only Muslim-majority state, Kashmir. This was granted to make the belated entry of Kashmir to the union more palatable to the local population. For example, the Constitution forbids other Indians from owning land in Kashmir. The BJP has long argued against this differentiation but feels it can now try to do something about it. It also plans to end India’s lenient stance towards illegal migration from its neighboring countries.

The external element to all this will be a further alignment of India’s foreign policy closer to that of the United States and, more broadly, the West. While Modi has been careful to maintain cordial relations with China, Russia and Iran he has few doubts that the long-term worldview of India is much closer to that of the West. All of India’s new crop of close friends – Japan, the United Arab Emirates, Israel and so on – are allies of Washington. Even President Donald Trump’s erratic behavior has not changed Modi’s view of America – in fact, he can claim to be one of the few world leaders who has a reasonably good relationship.

Modi has spoken of his desire to create a “Naya Bharat”, or a new India. While part of that is to bring down a stagnant establishment that sought to marginalize him for years, it is also about raising India’s economic growth rate by an order of magnitude and earning India a place on the global high table. Fundamentally, it is about creating a more powerful, unitarian and homogenous Indian state.

Pramit Pal Chaudhuri is Senior Editor of the Hindustan Times and Senior Associate of the consultancy Rhodium Group.

Back to normal? Debt and the future of the US economy