Ukraine and Russia: two countries at odds whose leaders benefit from the conflict

The governments of Ukraine and Russia assert that they have nothing in common. Kiev pursues a pro-European path of development and is actively cutting all formal links that connect it with its eastern neighbor. The Kremlin, rather, cultivates Russia’s own, unique mission, contrasting it with what it sees as a morally corrupt West.

The Kremlin advertises itself as a bastion of order and continuity, whereas Ukraine is portrayed by it as a hotbed of anarchy. Ukraine, on the other hand, portrays Vladimir Putin as an Asiatic and backward tyrant. Upon closer look, however, the two governments share some important traits. The standoff between Moscow and Kiev in the Kerch Strait that happened at the end of November was a good illustration. 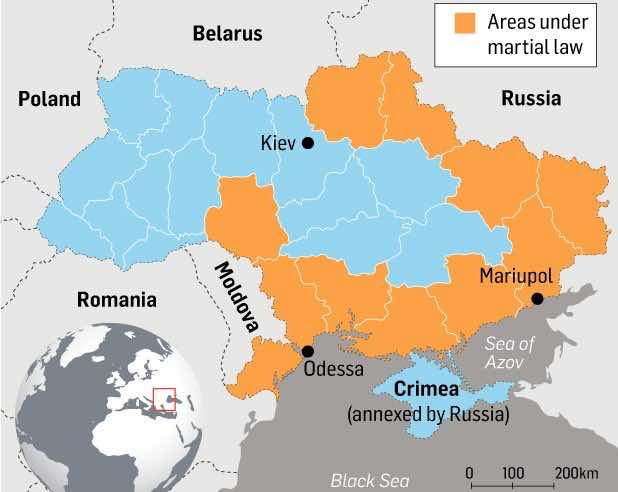 Oligarchs plague both Russia and Ukraine. The difference is that in Russia one group dominates the landscape, while in Ukraine there are multiple oligarchical groups that fuel political infighting.

Both countries have so far been unable to defeat endemic corruption and cronyism inside their governments and other state-linked entities. The difference is that Russia benefits from its vast oil and gas reserves and therefore it is about three times richer in terms of GDP per capita than Ukraine.

In essence, both Ukraine and Russia were unable to complete their departure from the Soviet model. They are still fundamentally post-Soviet countries.

Russia implemented many successful reforms in the 1990s. With the help of high oil prices, these reforms led to an economic boom in the 2000s. However, the reforms stalled and the Russian economy has been stagnant for a decade now. In Ukraine, reforms have never reached the critical mass that would be enough to produce rapid and long-term growth that the country so desperately needs.

In their respective situations, both governments use foreign policy and nationalism to boost their legitimacies. Both Petro Poroshenko and Vladimir Putin need each other to increase public support for their rule. Poroshenko faces re-election in March and his prospects look very grim. Putin suffered a painful drop in approval ratings this year due to a pension reform. He now faces the dilemma of how he can prolong his system post-2024, when the Russian Constitution will forbid him from running for president again.

Given this predicament, both Moscow and Kiev have no choice but to escalate the conflict that was sparked by mass anti-government protests in Kiev in 2014. The Kerch Strait incident took this conflict to a new level when, for the first time, the two countries clashed directly. Russia seized two Ukrainian artillery boats and a tugboat and holds 24 of its sailors and security officers in custody.

The Kerch Strait has been one of the symbols of the uneasy post-Soviet cooperation between Russia and Ukraine. Border delimitation has never been completed and both countries agreed to use the strait jointly. The passage itself has been under the authority of the Kerch port, which since the 2014 annexation has been under Russian control.

Under the UN Convention on the Law of the Sea, the coastal state can adopt laws and regulations to ensure “the safety of navigation and the regulation of maritime traffic” through its territorial waters.

In 2015, Russia passed a set of rules of passage through the Kerch Strait, administered by the Kerch port. In accordance with these rules, incoming vessels should receive a permission to pass through the strait and should get a navigation pilot from the port to steer them through the canal that links the Black and Azov seas.

Ukrainian military ships already passed through the Kerch Strait in September with a Russian navigation pilot on board without any peril. In November, they notified Russia that they would be passing through the strait, but this time Russian border guards responded that the Kerch port area had been closed and they could not proceed. The Ukrainian side, in contrast, said that they had not received any answer from Russia.

The Russian head of the Crimean port authority said that the strait was closed due to security reasons. However, it is likely that Russia did not act in good faith. In any case, even if the Ukrainian ships entered Russian territorial waters, border guards did not have to chase and capture the vessels, let alone ram and use artillery fire against them.

Poroshenko used this situation to declare martial law in the country’s ten regions for 30 days. Martial law had never been introduced in Ukraine even during the heaviest fights between the Ukrainian military and Russian-backed separatists in the country’s east, for instance during the battle of Debaltseve in 2015.  At the beginning, Poroshenko stated that the martial law would last 60 days, covering the election campaign period. Facing strong parliamentary objections, the law was amended.

As a result, both presidents got what they wanted. For Putin, interfering in Ukraine in 2014 produced a political jackpot at home. The Crimea effect, however, is now fading away. For Poroshenko, stirring wartime sentiments is now the only hope that he can stand a chance in the upcoming presidential election. In Russia, the Kremlin controls a vast propaganda machine that can twist any story in its favor. In Ukraine, there is wide consensus among the public in Kiev that every time the two counties clash, Russia is in the wrong.

Still few people, even among national firebrands, would doubt that it would be in the interest of both Russia and Ukraine to find a compromise and mend ties. Both countries would be more prosperous and better developed politically if they were on good terms.

The problem is that political elites in Moscow and Kiev decided long ago that they would only benefit from the conflict. Nevertheless, it is not important who holds the most guilt; what is important is that the interests of the two countries’ political leaders so far failed to coincide with the interests of Russian and Ukrainian citizens.