The West and the “trusted allies” inside Afghanistan

During the Afshar Operation in 1993, when Afghanistan was ruled by competing warlords and after a decade of mass displacement and a complete collapse of the state, the late Tajik military commander Ahmad Shāh Masʿūd was among those involved in the mass killing of thousands of Hazaras, which, back in the 1990s, had an important role in fighting the Taliban.

His son, the British-educated 32-year-old Ahmad Masʿūd, is today the new idol of a number of Western intellectuals and policy makers who are searching for a trustable figure (or “good guy”, to use an expression adopted by some scholars and analysts) to bet on. This is a pattern already witnessed in countless other contexts in which the US and their allies have intervened in recent years and decades.

Such approach, together with the endless debates on the value of “democracy promotion” and the footage of American soldiers saving Afghan civilians at the Kabul airport (who will be hosted in countries such as the United Arab Emirates and not in the US), serve two main objectives.

On the one hand, they overshadow the historical role that the US and their allies played in the destabilization and “talibanization” of Afghanistan. On the other, they provide a facile juxtaposition between an alleged enlightened West and a backward, inherently violent, East (embodied by Afghanistan, in this case).

The so-called Islamic State and the Taliban have clashed repeatedly since 2015 and remain fierce adversaries. The main point of connection between the new Taliban ruler of Afghanistan, Abdul Ghani Baradar, and the late head of the Islamic State, Abu Bakr al-Baghdadi, is that both were released from prison at the request of the United States. In both cases, Washington has been instrumental in putting them back in power.

Baradar, in particular, was released on October 20, 2018, and soon became the key local interlocutor of the Trump administration. The latter started formal negotiations that excluded the Afghan government, led by the controversial President Ashraf Ghani, lifted sanctions against the Taliban, and released about 5,000 of their militants from prison.

Back in 1994, Baradar was, together with the mullah Omar, the co-founder of the Taliban movement. Two years later (1996), the mullah Omar himself established the Islamic Emirate of Afghanistan and appointed Baradar as his deputy.

From then until October 2001 (when the US invasion of Afghanistan started), only three countries recognized and dealt with the new terrorist-led state: the United Arab Emirates (UAE), Saudi Arabia and Pakistan.

The shadows behind the financial connections between the UAE and Afghanistan have been widely documented. Just to provide an example documented by WikiLeaks and linked to the Masʿud clan, in 2009 alone, Ahmad Diyāʾ Masʿud (brother of Ahmad Shāh Masʿūd) entered the UAE with “$52 million” in cash, while being “allowed to keep [it] without revealing the money’s origin or destination”.

As for Saudi Arabia, since the time of the brutal, for some “genocidal”, Soviet invasion of Afghanistan, Riyad has been the major regional funder of the mujahideen – many of whom came to liberate the Muslim nation of Afghanistan from the “communist and atheist” Soviet invaders – and of a number of groups that later developed into the Taliban movement.

According to an assessment from then US Secretary of State Hillary Clinton, dated December 30, 2009, “Donors in Saudi Arabia constitute the most significant source of funding to Sunni terrorist groups worldwide […] Saudi Arabia remains a critical financial support base for Al Qaeda, the Taliban, LeT (Lashkar-e-Taiba), and other terrorist groups”.

Although to a more limited extent, the same applies to Pakistan – a nominal US ally and a safe haven and major source of funding for Taliban fighters – where the leader of Al Qaeda, Osama bin Laden, killed in the Pakistani city of Abbottabad in May 2011, had fled with other top commanders in December 2001. Bin Laden’s departure took place in the very same days in which the Taliban’s spokesperson offered an unconditional surrender, and just two months after the Taliban’s offer to hand bin Laden over. Both offers were rejected by then US President George W. Bush and his Secretary of Defense, Donald Rumsfeld.

Historically speaking, Al-Qaida has indeed much more to do with funds and policies linked to these three countries (beside the fact that 15/19 terrorists in the 9/11 attacks were Saudi citizens), than with Afghanistan or any other country in the region.

The US has spent more than $2 trillion (mainly) to train and equip the Afghan military over the past 20 years. The reason it fell in a matter of a few days is rooted in the very nature of the war in Afghanistan (and the one in Iraq). It was never about real training, and less so about “democracy promotion”.

The main driving force behind the war should instead be found in historical (“Soviet times”) and geostrategical considerations, as well as in the “defense” sector, which, in the States United alone, went from a budget of 305 to 754 billion dollars between 2001 and 2021.

More specifically, it has been estimated that about 80-90% of the money that Washington invested in Afghanistan – whose population is 75% larger than Syria’s at the start of its war, and is for this a matter of major concern for Western countries – found its way back to the US via contracts pledged with a huge number of private companies.

In this sense, Lockheed Martin (the major provider of Black Hawk helicopters, F-35 Stealth and MLRS multiple rocket launchers) and the other four main companies usually mentioned by analysts which focus on this subject (Boeing, Raytheon, Northrop Grumman and General Dynamics ), should be intended just as the tip of a much wider iceberg.

There are clear evidences that even European countries such as Sweden, commonly considered as a model of “sustainability, egalitarianism, and environmentalism”, experienced internal pressures by influential sections of its armed forces to bomb Afghans in order to “enhance the marketability” of their new Gripen fighter jets.

All this came at a huge human cost, particularly in respect to millions of Afghans (half of the population is currently under 19 years old). According to the US State Department, between 2001 and 2014, the “incidents of terrorism” increased of 3800% – from 355 in 2001 to 13,500 in 2014. Between 2001 and 2014, deaths from terrorist attacks increased six-fold, half of them occurring in Afghanistan and Iraq.

Among much else, these data remind us that the “usual solutions” adopted by a number of Western countries in the Middle East, such as sponsoring counterinsurgency forces, “building” armies or imposing economic sanctions, have always failed and will most likely continue to do so in the future.

Historically speaking, some of the key ideological roots of the Taliban movement go back to 19th century colonial India. As for Afghanistan, where some of the most advanced and cosmopolitan urban centers flourished in early modern times, it is a country that Great Britain saw as functional to its goal of limiting Russian expansion in Central Asia.

A particularly meaningful example connected to this approach can be found in the so-called Durand Line, which was drawn by Great Britain in Afghanistan in 1893: It is a “bloody border” that still today explains the reason Afghans call the western part of Pakistan Pashtunistan – i.e. a distinct political entity. 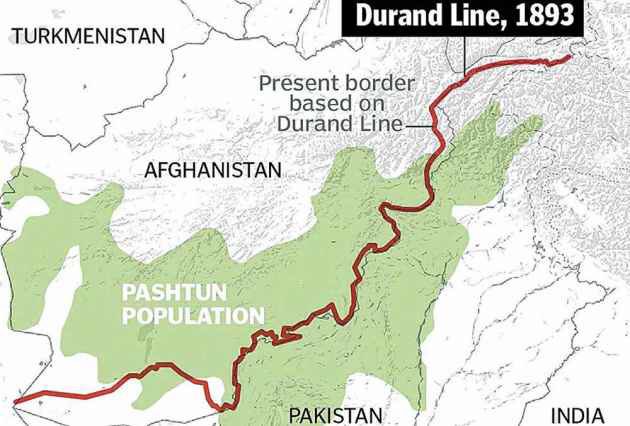 Between then and the anti-Soviet war in the 1970s/80s, when the US (together with Pakistan, Great Britain and Saudi Arabia) funded and armed Arab mujahideen that would later become the Taliban, Afghanistan acquired most of its current features. It has been proven that even the most fundamentalist textbooks used in Afghanistan in the 1980s, including the ones adopted by the Taliban, had been produced (both in the Pashto and Dari languages) and funded by the CIA.

Too often external observers, particularly in Europe and in the US, tend to neglect this background, while preferring to approach the dramatic present of Afghanistan, and generally a large part of the Middle East, as something pertaining to peoples that are largely detached from their political, historical and economic past and present.

It is instead necessary to overcome this segregated interpretation of “our history” and “their history”, paving the way for a more humble approach toward the peoples’ region and their past and present traumas.

Overall, and except for a few isolated and circumscribed cases, Western countries are not helping Afghans today, nor did they help them in the past: Their policies are instead among the structural reasons millions of Afghans have faced decades of continuing wars, violence and destruction. And yet, if anything, history has taught us that what starts in Afghanistan does not stay in Afghanistan.

Lorenzo Kamel is Associate Professor of History at the University of Turin, scientific director of the New-Med Research Network, and director of the IAI's Research Studies. He held teaching and research positions in many universities in the Middle East, the US, and Europe, including the Albert-Ludwigs-Universität Freiburg, where he served as a Marie Curie Experienced Researcher, and Harvard University, where he was a Postdoctoral Fellow for 2 years. His most recent book is entitled 'The Middle from Empire to Sealed Identities' (Edinburgh UP 2019).

Twenty years in Afghanistan (Part 1): How did we get here?