The UN debate over international sanctions: a crisis of multilateralism

Israeli Prime Minister Benjamin Netanyahu proved unintentionally insightful when he hailed, in his late September speech to the United Nations General Assembly, the collapse of a landmark global accord. “When I spoke here, three years ago, Israel stood alone among the nations,” Netanyahu said on Sept. 27. “Of the nearly 200 countries that sit in this hall, only Israel openly opposed the nuclear deal with Iran.”

So much has happened on the global political stage since 2015, from the election of Donald Trump in the United States to Brexit, that it’s sometimes hard to even remember what the world looked like before then, let alone pinpoint any one change as especially emblematic of the rapidly shifting international order.

But, as Netanyahu noted, though with disdain, there was a time, not too long ago, when the international community could come together under the auspices of the UN Security Council and convince Iran to give up its nuclear weapons program in exchange for fresh access to the global economy.That time is now gone, and the vanishing international consensus on the use of economic sanctions to rein in misbehaving nation states, driven in particular by the United States’ go-it-alone approach, is now perhaps the most visible illustration of the limits, if not the breakdown, of old-world multilateralism. 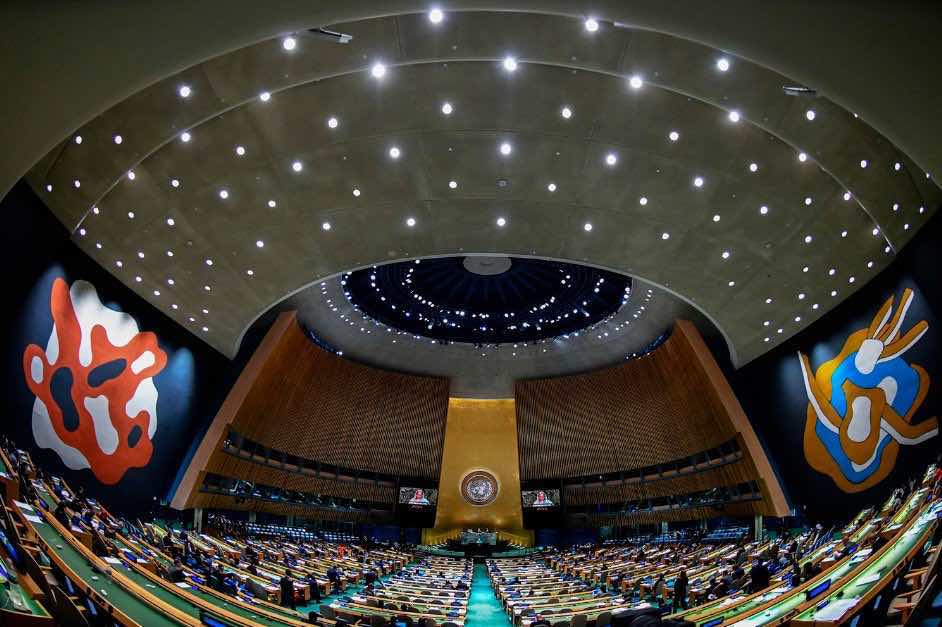 President Trump shoved aside the Joint Comprehensive Plan of Action, which took years of selectively applied economic pressure and carefully orchestrated negotiations between the United States, France, the United Kingdom, Germany, China, Russia and the Islamic Republic to reach, not because Teheran failed to comply with its terms.He did so over the objections of the United States’ European allies, the other parties to the deal and much of the American foreign policy establishment, out of the need to keep fantastical campaign promises, under pressure from hawks in his administration, and with the blind conviction that he, the best dealmaker the world has ever seen, would be able to extract more concessions from Iran in some imaginary future talks.

“The Iran deal was a windfall for Iran’s leaders,” Trump said in his speech to the UN General Assembly on Sep. 25. “We ask all nations to isolate Iran’s regime as long as its aggression continues.” Iran, however, is not the only country caught in the middle of the current impasse over sanctions. There are plenty of other examples on display at this year’s UN General Assembly of how the broader framework that seemed to work until recently has gone awry.

Russia and the United States have, in succession, recently blocked the release of a UN independent assessment of North Korea’s continued evasion of the global sanctions regime they contributed to putting in place to prevent Pyongyang from funding the development of nuclear weapons.

Moscow first disagreed with the report’s finding of Russian involvement in prohibited ship-to-ship transfers of petroleum products to North Korea. U.S. Ambassador to the UN Nikki Haley then lambasted the panel of experts tasked with the review “for caving to Russian pressure and making changes to what should have been an independent report”.

U.S., UK and European sanctions on Russia itself, for its annexation of Crimea, continued interference in Ukraine and, most importantly, attempts to influence foreign elections (including the 2016 U.S. presidential vote), are causing all manners of political fractures, and not just with Moscow.

“Diplomacy and the culture of negotiations and compromise have been increasingly replaced by dictate and unilateral extraterritorial restrictions put in effect without the consent of the U.N. Security Council,” Russian Foreign Minister Sergey Lavrov told the UN General Assembly Sept. 28. “Such measures, applied already to dozens of countries, are not only illicit, but also ineffective – as exemplified, in particular, by more than half a century long U.S. blockade of Cuba, which is condemned by the entire international community.”

Russian sanctions are also creating tensions between allies, for example in Europe, where countries like Italy and Germany have been far more reluctant than, say, Baltic and Eastern European states to implement them. And they are ripping apart the United States, where Democrats and Republicans, Congress and the White House are engaged in a never-ending spat over just how “hard” or “soft” on Russia one ought to be.

In the meantime, under its increasing unilateral attitude to world affairs, Washington has began imposing travel bans and asset freezes on Burmese military commanders, Turkish government ministers and Nicaraguan police officials under a new law that allows the United States to blacklist on a whim pretty much anybody in the world that it deems guilty of corruption or human rights abuses. Not a move likely to endear it to the rest the world.

Increasingly, sanctions appear to have become, at least in the United States, a solution in search of a problem.

The first casualty of this trend is not the odd corrupt government official in Africa or Latin America, who deserves no particular sympathy, but sanctions themselves, as a calibrated and convincing way to trigger a change in behavior by rogue actors. Without multilateral support, sanctions, even U.S. measures backed by the mighty American economy, are too easy to evade. Without a reasoned and consistent political strategy and messaging, which lays out clear terms as much for imposing as for lifting them, sanctions lack credibility and lose their power of persuasion.

The second, less immediate but far more profound, victim of mounting international disagreements over the use sanctions is the global financial system as we know it, heavily centered on the widespread use of the U.S. dollar.

As Washington re-imposes sanctions on Iran that were lifted as part of the JCPOA, including on any company anywhere in the world that simultaneously has exposure to the United States and conducts business with the Islamic Republic, the European Union scrambles to salvage the deal as best as it can. European officials have gone as far as pledging to develop a new system for European and Iranian firms to transact with each other while completely avoiding the U.S. banking system and, therefore, U.S. jurisdiction.

China, Russia, Venezuela and plenty of other countries around the world have separately launched, or are working to devise, government-controlled cryptocurrencies, partially in efforts to expand the volume of cross-border transfers that don’t require U.S. dollar clearing services. Some of these experiments are likely to fail, but in time it is possible that at least a few of them might yield a new global payment system that’s less reliant on the U.S. dollar.

Ironically, over the long term the bigger loser of this creeping trend toward less multilateralism in sanctions enforcement might very well be the country most responsible for it, the United States, rather than those targeted for allegedly infringing global norms.