December 2016 may come to be known as the end of the beginning of Russia’s power projection into the Middle East. Over a span of just three weeks, events in Syria, Turkey, and over the Black Sea revealed the limits of Russian military capabilities, challenged President Vladimir Putin’s resolve to project power into the region, and forced the Russian public to confront the costs that come with a foreign war.

How Putin handles the recapture of Palmyra by the Islamic State; the assassination of Russian Ambassador Andrei Karlov in Ankara; and the non-combat loss of members of the Alexandrov Ensemble choir, journalists, and prominent humanitarian activist Dr. Liza Glinka in an air incident over the Black Sea, will be crucial. It will reveal how seriously and how capably Moscow can use the Syrian conflict to sustain Russia’s ongoing challenge to the international order that has prevailed since the collapse of the Soviet Union in 1991.[1] 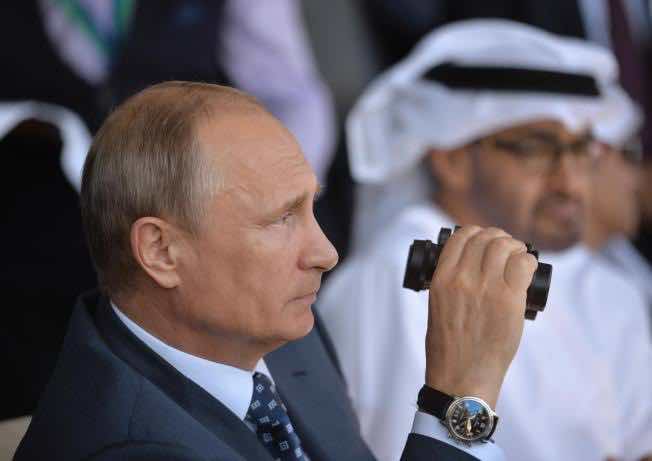 On December 11, Islamic State forces overran the Russian military base at Palmyra (the historic city in central Syria), taking advantage of Russian attention to Aleppo and the relatively weak Syrian Army left behind to defend the city. That base was a symbol of Russia’s rout of Islamic State forces in May, a well-publicized victory that was capped by a concert given by renowned conductor Valery Gergiev in the city’s ancient amphitheater. The Palmyra victory was followed in December by the defeat of non-ISIS rebels in Aleppo, which strongly suggested an unstoppable advance. However, the return of Palmyra to ISIS while Russian forces focused on Aleppo revealed that Russian forces in Syria can run one successful campaign at a time, while taking and holding far-flung territory (Palmyra and Aleppo are about 200 km from each other) in conjunction with the Syrian Army is beyond the capabilities of existing forces.

The survival of Bashar al-Assad’s rule is the cornerstone of Russian strategy in the Middle East. Yet if the Syrian Army cannot defend the country on its own, Putin will have to decide whether or not to increase Russian military assets in Syria. This puts the Russian president in a dilemma akin to what Lyndon Baines Johnson faced in South Vietnam in the 1960s: when the great power’s credibility with other great powers is dependent on the fortunes of a client, it is the client who is shaping the alliance. South Vietnam came to represent America’s credibility in fighting communism, and now Syria tests Russia’s credibility in projecting power abroad – it has to survive with Assad in power as a necessary condition for Russia to spearhead international efforts to combat jihadist terrorism, in turn validating Russia as an indispensable international power. Putin now has to assess whether existing capabilities can manage ISIS and non-ISIS opposition to Assad — given that the US is unlikely to provide much support — or whether he needs to introduce ground troops to preserve the status quo.

A week after the ISIS recapture of Palmyra, the assassination of Russian Ambassador Andrei Karlov at a photo-exhibit in Ankara on December 19 shocked the world. The assassin, an off-duty Turkish police officer smartly dressed in a dark suit, strode behind the diplomat. Rolling cameras captured the ambassador’s last moments and the assassin’s shouted monologue about Aleppo and the war in Syria. Karlov was the first Russian ambassador assassinated since the 1920s and seems to echo the events of the early 19th century when Ambassador Alexander Griboyedov died in 1829 at the hands of a Tehran mob primed by anger over Russia’s southward push into the Caucasus.

The official response to Karlov’s murder amounted to two major talking points in the Russian media: the ambassador was the victim of an international atmosphere of Russophobia and nothing will derail Russian-Turkish cooperation. These positions revealed that Moscow remains committed to its Syria policy — which includes rapprochement with Turkey  — and would place the blame on the West for any setback to Russian foreign policy, whether deserved or not. For President Recep Tayyip Erdoğan, the lenient Russian response highlighted the Turkish leader’s foreign and domestic limitations.

Following the failed coup attempt this summer, the government has spent most of its energy purging the country’s military forces, judiciary, educational institutions, media, and civil service of opponents to Erdogan’s rule, removing over 110,000 individuals from their positions and opening a serious breach with Turkey’s Western allies, particularly the European Union, over this policy. The strained relations with the West and the sheer priority placed on political survival limits Erdogan’s own previous foreign policy aim of removing Assad to project Turkey’s own power southwards to an “Aleppo for al-Bab” trade (al-Bab sits 40km from Aleppo and 30km south of the Turkish border): coordinating with Russia to sweep out ISIS from the border regions and prevent Syrian Kurdish groups from establishing control across Turkey’s border in return for supporting Russia’s broader strategy. Though certainly to a lesser extent, Erdoğan finds himself in a position similar to Assad in needing Russian external support to focus on battling domestic enemies.

Finally, on Christmas day a Russian Ministry of Defense airplane carrying 92 people, including members of the Alexandrov Ensemble choir, crashed shortly after takeoff from Sochi into the Black Sea on the way to perform for troops in Latakia, Syria. It is difficult to describe fully the cultural importance of the Alexandrov Ensemble to Russians themselves, but the iconic choir has been central to patriotic cultural expression since the early days of the Soviet Union. That news has completely replaced the Karlov assassination in the Russian media, and now there are early rumblings on considering what purpose the war in Syria serves.

Any one of these three events challenges the Putin leadership because of how power is practiced in Russia. The weakness of formal institutions and the corresponding importance of informal politics obliges the leadership to constantly maintain the initiative and project confidence and power at all times, or else the limits of power will be recognized. With three setbacks occurring within a month, the question becomes how long the Russian leadership can maintain the status quo.

Some assistance may come from US president-elect Donald Trump who, as a candidate, hinted at pursuing a much more accommodating policy towards Russia compared to the neo-containment of President Barack Obama, especially on sanctions relief, reduced support for human rights, and reduced support for democratization. But even Trump’s potential accommodation of Russia was based on Russia taking the lead in destroying ISIS in Syria. That policy requires a protracted military effort and the acceptance of military casualties, a step so sensitive for the Russian government wary of public opinion that it banned the publication of peacetime troop deaths in May 2015.

Putin may have planned to make that theater the basis of Russia’s ongoing challenge to the international order, but the cost will be open-ended commitment to combat in the region and creating an issue deeply unpopular with the Russian public – ahead of the Russian presidential elections of March 2018.

[1] Russian strategy since that time has been to recreate the post-Cold War international order reached by George H.W. Bush and Mikhail Gorbachev at the November 1989 Malta Summit: the USSR was no longer a hyper-power, but it was a leading power in the European security order and central to international diplomacy. The interventionism observed over the past decade has merely been a change in tactics.

Bridging the great finance divide between developed and developing countries

Ukraine: military offensives, hybrid attacks – and no peace in sight