The Democrats’ uphill path to the Hill

On November 8, 2022, the US will hold midterm elections. They are often a referendum on the party in power and, historically, the president’s party usually loses seats – if not control of one or both chambers. For many months, Republicans have been confident about being able to win both the House and the Senate: in a polarized political environment, such as the current one, that would mean killing Biden’s agenda.

After the summer, however, the situation for Democrats improved. There are several reasons: lower gas prices, the social mobilization on abortion, and some Republican candidates who appear to be too radical. Biden’s approval rating is also regaining ground: currently at 43%, which is in line with many past presidents at this point of their administrations. At a first sight, the task of retaining the Senate looks quite difficult for Biden’s party: Republicans need to gain just one seat to be in control for the next two years. However, in contrast to 2018, when Democrats were defending ten seats in states that Trump won in 2016, the President’s party now holds no seats in any state that was won by Trump in 2020. Meanwhile, Republicans are defending two seats in states (Pennsylvania and Wisconsin) that Biden won in 2020, compared to the single seat held by the GOP in Nevada that Hillary Clinton won in 2016. 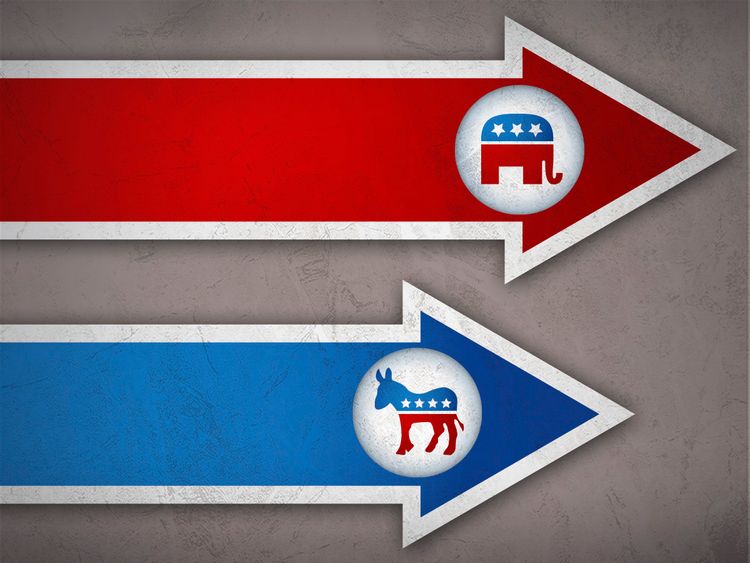 The fate of the Senate will likely be decided by six key races that opinion polls show as being very close. Three are the seats that Democrats need to keep: Arizona, Georgia and Nevada. While Ohio, Pennsylvania and Wisconsin are battleground races for seats currently held by the Republicans.

In Arizona the race is between incumbent Mark Kelly (former astronaut and husband of former Democratic congresswoman Gabrielle Giffords) and “Trumpist” Blake Masters, one of the most controversial Republican candidates: he has embraced the call for denying the legitimacy of the 2020 election and he has consistently campaigned against abortion. Kelly is a moderate and one of the top Senate Democrats’ best fundraisers. He is slightly ahead in the polls and he should be able to be re-elected.

In Georgia, the first black senator in the history of the state, Raphael G. Warnock, is challenged by Herschel Walker, who is not only another far-right Republican candidate, but he is also under scrutiny for some domestic violence allegations. Warnock is popular, but, after the 2020 election, Georgia Republicans passed one of the most restrictive voter laws in the nation and the fear on the Democrats’ side is that not many African Americans will go to vote.

Nevada’s Catherine Cortez Masto is the first Latina US senator, and she will face Republican Adam Laxalt, former state attorney general and grandson of a former Nevada governor. Once again, abortion is at the center of the campaign: while Cortez Masto is consistently campaigning against the Supreme Court decision that restricted women’s rights, Laxalt called Roe v. Wade a “joke”. Republicans are slightly ahead in the polls but Nevada is traditionally difficult to predict: it is one of the states with the highest turnover of residents and with lower levels of participation.

With the retirement of Republican Pat Toomey, Pennsylvania is an open seat and is the race that is likely attracting the largest amount of media attention. Republicans nominated celebrity TV doctor Mehmet Oz. He is the first Muslim candidate to be nominated by either major party for the Senate. However, during his TV career, his promotion of pseudoscience and various paranormal beliefs has earned him public criticism. Democratic opponent, Lieutenant Governor John Fetterman is also a peculiar character: a physically imposing figure, he is tattooed and campaigns in a hoodie and gym shorts. He supports policies that align him with the liberal wing of his party, such as universal health care, which could be too liberal for this swing state. He was leading in the early polls but he has been away from the campaign for weeks since recovering from a stroke that he suffered in May. The race has tightened and polls now show Fetterman’s lead shrinking. Since 1992, a Republican nominee for president has carried the state just once – Trump in 2016 over Hillary Clinton. But Pennsylvania is a complicated state: seven times in that time frame have voters elected or re-elected Republicans to the Senate.

Ohio is an open seat too, held by a retiring Republican. J.D. Vance is the GOP nominee, a businessman known for his right-wing rhetoric, for aligning with most of Trump’s narratives and for being the author of Hillbilly Elegy – a renowned novel and the basis of a successful 2020 drama film. Democratic Rep. Tim Ryan is a moderate figure but he is competing in a state that used to be considered a swing state but consistently voted for Trump in 2016 and in 2020.

Finally, Wisconsin: incumbent Ron Johnson is his party’s most vulnerable senator. He is the only Republican senator running for election in a state that voted for Biden in 2020. He also notoriously believes in all Trump narratives: from the coronavirus to the “rigged election” to the January 6 attack on the US Capitol. Democrat Mandela Barnes could be the first African American senator from the state. Young and liberal, his campaign focus is also on abortion. But the strategy seems to not be paying off: his early leads in the polls have disappeared and Republicans are convincingly spending money in ads that are attacking his public record on crime.

Read also: From the legacy of the Trump presidency to the Midterms and beyond

Regarding the House of Representative, Democrats can retain control if they lose less than five seats, which looks very hard to accomplish: the president’s party has managed to avoid losses in excess of four seats only four times since 1882 – and none of these years look like 2022. In 1934, the US was enjoying strong economic growth in Franklin Delano Roosevelt’s first term. The year 1962 saw another economic boom, and incumbent JFK had an approval rating of more than 70%. In 1998, the country was again enjoying steady growth, and positive views of Bill Clinton’s job were around 65%. In 2002, the economy was not positive, but George W. Bush’s job approval was still very high about a year after the 9/11 terrorist attacks.

However, taking a closer district-by-district look, it becomes clear that there are not many “winnable” seats for either party. For instance, there are 15 seats either held by Democrats (Alaska-at large, Arizona-2, Florida-4, Florida-7, Florida-13, Georgia-6, Maine-2, Ohio-9, Pennsylvania-8, Tennessee-5, Texas-15, Wisconsin-3) or emerging from districts that are newly drawn (Florida-15, Montana-1, Texas-38) where Biden received less than 50% of the vote. While Democrats will likely win some of these this cycle, many of these are potential Republican gains. At the same time, there are six seats that are either occupied by Republicans (California-22, California-27, Illinois-13) or are newly created (North Carolina-14, Oregon-6, Texas-37) where in 2020 Biden won with more than 54% of the vote. The seats where Biden won between 51% and 53% of the vote are just 18. Of those, ten are held by Democrats, seven are held by Republicans, and one reflects a newly-created district.

So, while it seems hard to predict a Republican landslide, there is enough space for the GOP to easily gain those five seats that would give them the crucial majority of the House. It is true that the Supreme Court’s Dobbs decision on abortion rights from last June may still supersize the Democrats’ consensus and eventually change the fate of these midterms.

However, at the moment, the most probable outcome is the new House with a Republican majority and a Senate that is “too close to call”.

Read also: The abortion debate in the US: a split country