The abortion debate in the US: a split country

Should the leaked US Supreme Court opinion that overrules “Roe v Wade and Casey vs Planned Parenthood” be confirmed (it’s not uncommon for drafts to change even significantly before the final decision is officially announced) access to abortion would no longer be protected as law of the land in the country. The Court will possibly publish its ruling by the end of June, when its current session ends.

In any case, this does not mean that abortion would immediately become illegal, or even severely restricted, everywhere in the US. Instead, the landscape of access to abortion would look more like what the union actually is –a collection of very different states with wildly different policies, cultures, and standards of living – than what it is often thought to be – a somewhat homogenous country.

When it comes to reproductive rights, the US map would look very much like it did pre-1973, when Roe v Wade was passed: a split country. Along the coasts, and in the northeast, more progressive states would not only grant abortion rights to their citizens. In the middle of the country, and the south, there would be essentially a desert of opportunities to terminate unwanted pregnancies.

The restrictions would go from severe (with fetal “heartbeat” laws banning elective abortions as early as the sixth week, often before a woman even has the time to realize she is pregnant), to draconian (such as Oklahoma’s law banning abortion from fertilization), to outright dystopian (such as with Texas-like laws paying citizens to report abortions). 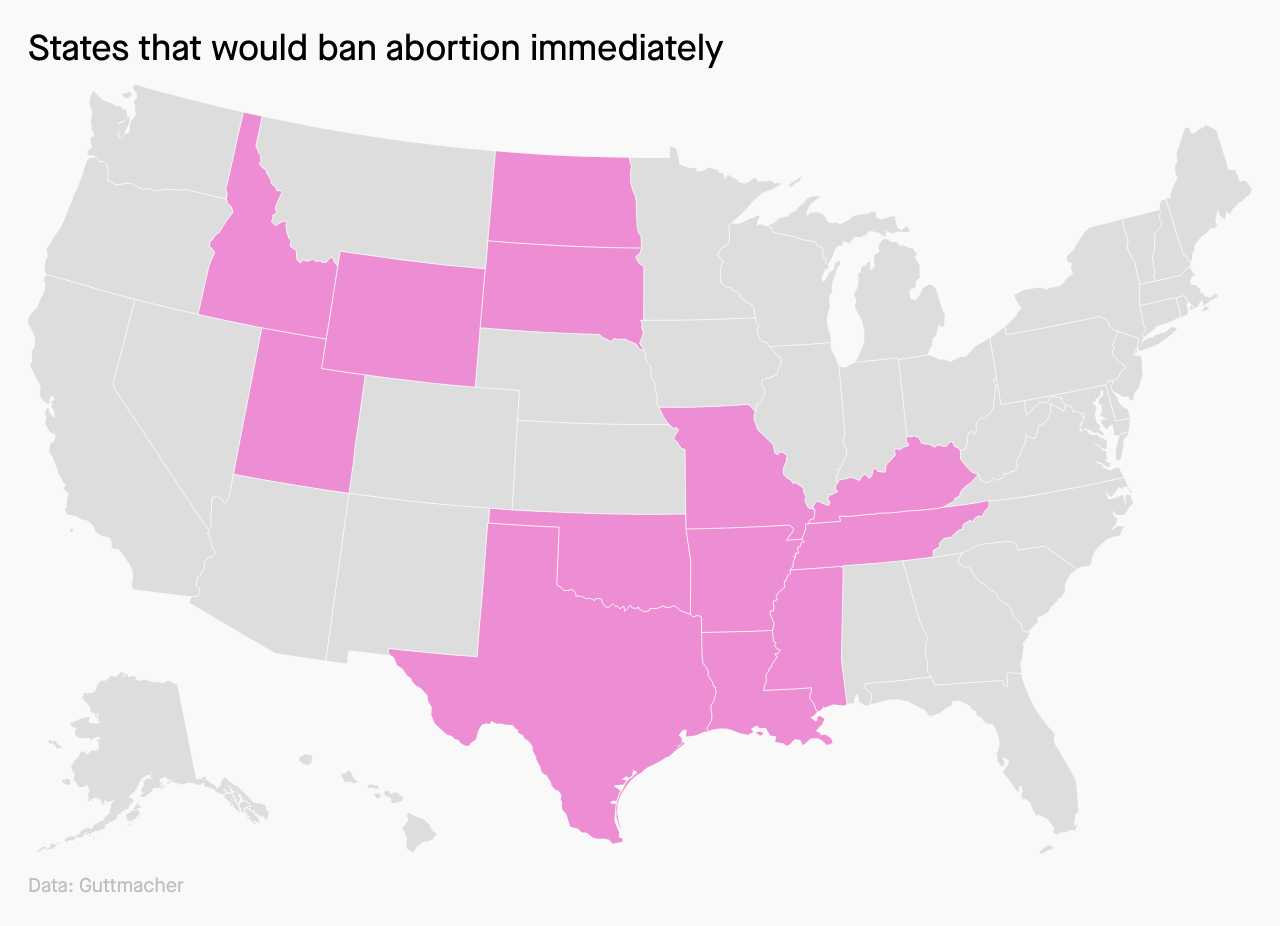 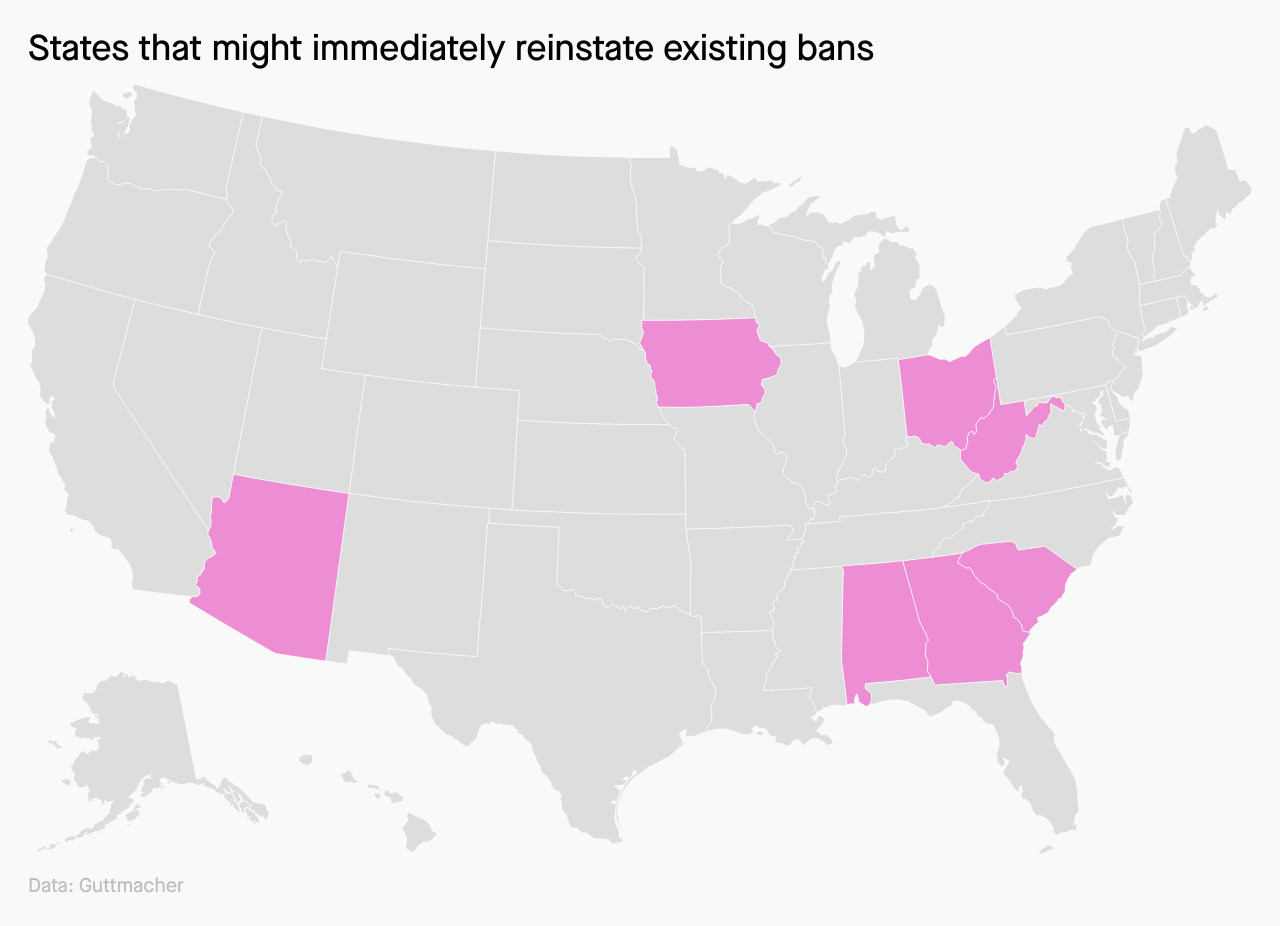 Four (Florida, Indiana, Montana, Nebraska) are very likely to quickly pass legislation banning abortion. Two more states (Michigan and Wisconsin), have governors that support abortion rights and might be able to veto abortion bans. Overall, women in as many as 26 states could find themselves without abortion rights in the immediate to near future. 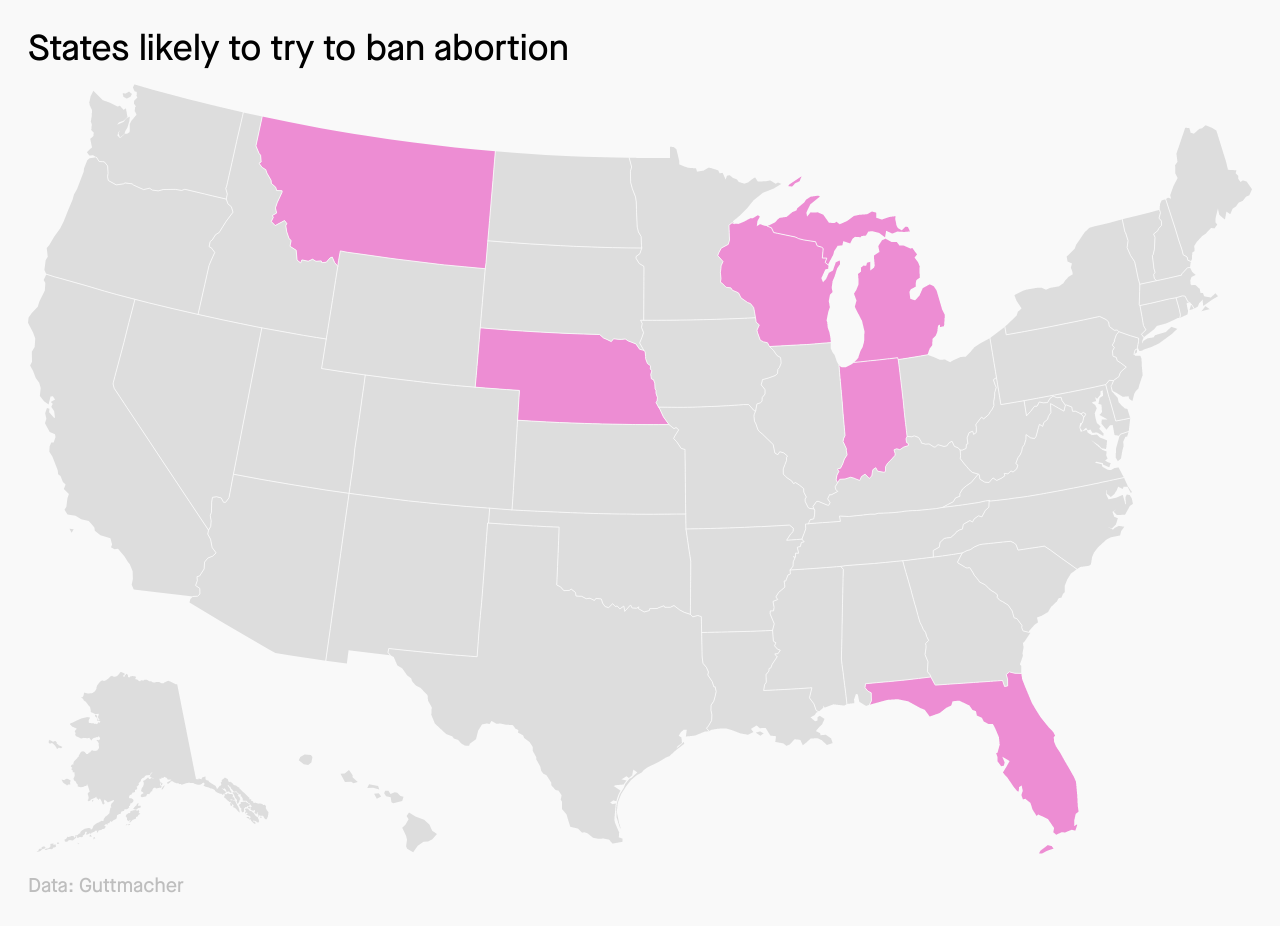 These are states, too, where other policies – such as failure to adopt Medicaid expansions, insufficient, often abstinence-focused sexual education, and reduced anti-poverty measures – would help create a perfect storm: high rates of unwanted pregnancies, no access to abortion, and a total lack of support for mothers in low-income groups.

While the reality of financial obstacles to abortion is already in effect in the states that have already set up obstacles to abortion (for instance, compulsory counseling, two-day procedures, difficulty getting medical abortions), constitutionally acceptable ban on abortions would not be splitting reproductive and women’s rights far beyond the geographical lines. As it was until the mid-1970s, states accessing abortion would become ravel destinations for those seeking to end a pregnancy and unable of doing so in their own states. Even more dramatically than it is now in states that have been able to pass significant restrictions to abortion even within a Roe v Wade framework – such as Missouri, which only has one abortion clinic left – access to pregnancy termination would become a function of economic inequality.

Financial concerns are among the main reasons behind the decision to have an abortion, and nearly half of the people getting an abortion live below the poverty line. Even with safe and legal abortion available, women can struggle to come up with the money to pay for the procedure, which can cost up to $1,500, depending on whether the abortion is preformed through medication or surgery, and the pregnancy stage. Add to that the cost of traveling to another state, accommodation, childcare (a majority of women getting abortion are already mothers), loss of income for the time spent traveling, and the bill can easily run into the thousands of dollars. This is already a huge burden for women and families living in poverty, particularly considering less than half Americans have enough available savings to afford a $1,000 emergency, so the added cost of travel to another state makes the procedure out of the question.

Effectively, bans on abortion remove access to safe abortion only for women and families of lower income, contributing to a growth in inequality. Indeed, being denied abortion is linked to an increase in poverty and inequality, as families of lower means are forced deeper into poverty, while others can still dispose of choice.

When Roe v Wade established the right to abortion all over the US in 1973,  the decision did not entirely eliminate the geographically (and socially) scattered nature of abortion access, and laws curtailing the right have continued to rise in number and complexity. So, should there not be a federal law regulating access to abortion, and protecting the right to it, even broadly?

Many think there should be such a legal framework, particularly considering that a majority of Americans support the right of choice, and that the strictest ban only respond to the will of a minority of Republican Party voters. In 2019, during the Democratic Party primaries, Massachusetts senator Elizabeth Warren suggested that the solution to the threat to abolish abortion rights would be precisely in a federal law.

But doomed attempt by the Democratic Party to pass a federal law earlier this month, following another attempt in February, showed a Congress majority in support of abortion is not sufficient to enshrine its right as a federal law. The obstacle is in the system: although technically laws are supposed to pass the Senate with a simple majority, the rule known as the filibuster allows debates on bills to continue indefinitely until 60 votes are in favor. A rule once rarely enforced, the filibuster has become a routine tool to block legislature, and although Democrats could vote to eliminate it, they do not have the internal consensus to do so.

It was not always so: Democrats have held 60 seats in the Senate in the past (most recently, in 2009 and 2010), but did not try to pass abortion laws then, nor did they do so at times when the filibuster was enforced less frequently, and the partisanship was less accentuated. It is a credit to the long-game played by the anti-abortion movements that no significant federal action to prevent the current situation has been taken for decades.

While the Supreme Court decision would be a significant setback in the short-term, not all hope is lost. The hope of pro-choice advocates is that the urgency of granting a right most Americans agree with might act as a catalyst to get more voters to support pro-choice candidates, speeding up an eventual timeline for a Democratic majority in the Senate, which could then pass a federal law granting a minimum of abortion access across the country.

Of course, that law could then be challenged in court – but it remains to be seen whether the political calculation would make it wise for Republicans to do so.