The battleground for the future of digital payments

Eighty-one countries, representing over 90% of the global GDP, are exploring the issuance of a Central Bank Digital Currency (CBDC). This number is up from only thirty-five in May 2020. Only five countries have already fully launch a national CBDC until today. Among the largest economies, the People’s Bank of China (PBoC) is by far at the most advance stage of development of a CBDC.

China has already introduced several pilot experiments of its digital Yuan (E-CNY). At June 2021, the E-CNY was used in more than 70.7 million transactions for a value of RMB 34.5 billion and was used by 20.8 million retail users and 3.5 million corporate users. The European Central Bank (ECB), instead, recently disclosed its roadmap to launch the investigation phase of a digital euro project which will end up in five years. In the US, several officials of the Federal Reserve have been pushing to explore the issuance of a digital US dollar. For example, the Boston Fed and MIT have launched a joint project in which they will set up a hypothetical model for a digital US dollar.

So why are CBDCs gathering momentum? 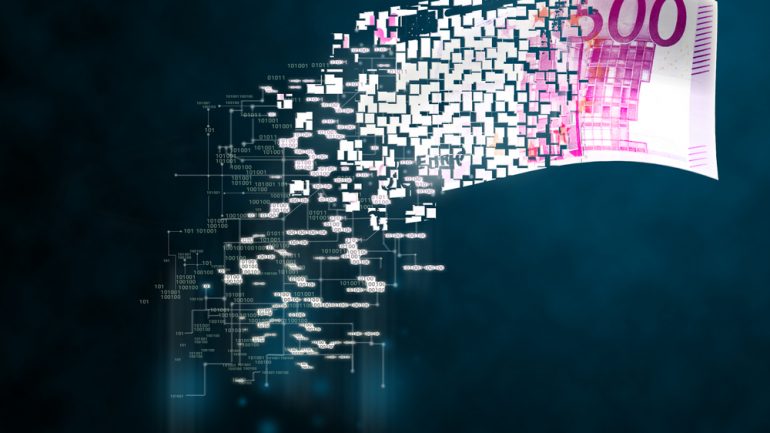 Cash will not disappear anytime soon. It remains the most widely used payment instrument in the world, and a 2018 G4S report shows that demand for cash has actually increased. Globally, the average amount of currency in circulation accounted for 9.6 per cent of gross domestic product (GDP) in 2016 – up from 8.1 per cent in 2011. In Europe, 78.8 per cent of all transactions were conducted with cash; the global average was 50 per cent.

Nevertheless, mobile payments – together with credit and debit cards – are consolidating the mega-trend of non-cash payments. With the growing availability of non-cash payment instruments, global non-cash transactions reached a total of 708.5 billion in 2019, an 80 per cent surge since 2014. This mega-trend is likely to keep growing.

But cash is likely to also be challenged by a growing number of digital currencies in the next future. Several digital currencies are currently available on the market, and they are shaped by different features – decentralised/centralised; tied to an outside asset/based on demand and supply. But they have one core characteristic in common: they are not issued or backed by any government.

A well-known form is the Bitcoin which value is determined by different factors, but the most important one is demand for it. For this reason, its value tends to fluctuate a great deal. Another form is the stablecoin such as Diem – Facebook’s project – or Tether. Stablecoins are digital currencies whose value is anchored to a basket of assets – which could be national currencies, gold, etc. Therefore, the value of a stablecoin depends on the value of those assets, guaranteeing a more secure form of money.

However, if retail digital payments, both digital currencies and digital payment instruments, are enabled by private corporations, countries risk being dependent on the private sector for a core function of their economies. For example, in China, the number and value of transactions via mobile payment accounted for 66% and 59% of the total in 2019 while cash-based transactions were only 23% and 16%. Nevertheless, around 92% of mobile payments is made through only two private providers – WeChat Pay (39%) and Alipay (53%) – which are integrated in much larger and diversified ecosystems associated to the Chinese BigTechs: Tencent and Alibaba. Their dominant position in the payment industry poses several concerns on systemic relevance, market power and anticompetitive use of data

In order not to be left behind or outcompeted by the growing initiatives undertaken by the private sector, central banks are exploring the issuance of a CBDC which could help them to regain a central role in the digital payment market. A CBDC is not “a well-defined term”. However, generally it can be described as a liability of a central bank. It is a digital form of a country’s sovereign currency issued by a central bank and backed by central-government credit. Instead of printing cash, central banks issue virtual money – a sort of virtual representation of coins and bills.

There are several reasons why countries are exploring this innovation, depending on their individual socio-economic situations. However, the digitalization of the economy (and of the payment system) is the key driver behind the current CBDC’s momentum. Moreover, if cash usage declines, a CBDC could reduce the high costs related to the printing, transporting and storage of coins and bills. Issuing a CBDC could require high sunk costs – to develop the technology that supports it, for example – but its subsequent scalability would reduce the expenses associated with money in the long term. Furthermore, it could also foster financial inclusion. It could provide unbanked people with a cheap and easy way to pay and manage money.

The future of payment: Private vs Public

As previously mentioned, the mega-trend of cashless transactions could give private providers a new centrality in our economy, potentially challenging the role of central banks in issuing and supervising money issuance. Worldwide supervisors are extremely concersn in case Big Techs start offering new digital currencies. This is because Big Techs enjoy strong network effects, potentially empowering easy and quick adoption of their digital currency at a large scale.

Furthermore, Big Techs can exploit two key factors that highly affect money circulation. First, the credibility of the issuer. Consumers need to trust that they can convert their digital tokens into fiat money anytime they like, and that the value of the currency is indeed stable and backed by reserves. Second, the degree of acceptance. Users could be incentivised to adopt a digital currency that is backed by a corporation that has a pre-existing relationship with a large consumer base and has high brand recognition, as this could mitigate the perceived risks related to its governance. Moreover, Big Techs could empower an ecosystem of services and products accessible through this digital currency, exploiting network effects. Such characteristics could allow both diffusion of information and adoption, reducing the common entry barriers to traditional currency.

A payment industry dominated by private providers also raises concerns on privacy. Cash – in the form of banknotes and coins – has the unique feature of full anonymity. While paying for goods or services with cash, a consumer does not disclose any information about his/her personal identity. This is not true when using cards or mobile payment apps: any time one pays with these solutions, he/she leaves a trail. With the growing digitalisation of payments, private providers accumulate data on transactions, monetising the information they gather.

This explains why national and international supervisors strongly reacted to Facebook’s announcement of the Libra’s project (today renamed Diem). Libra could have indeed become systemic and globally adopted the moment it would have been launched. The Financial Stability Board (FSB) has indeed raised a set of issues around the development of global privately owned digital currencies: consumer protection; data concentration; potential effect on monetary policy and financial stability; money laundering and financing of crime and fair competition.

If global stablecoins have the features to quickly reach scale, they would then pressure (and potentially surpass) money (cash and bank deposits), potentially increasing the dependency of states and central banks on private providers. Some fear that global stablecoins could undermine the sovereignty of public money. CBDCs could then perform a counterbalancing function, strengthening the role of central banks – and, therefore, of the state – in a more highly digitalised economy.

The driver is then to provide the public with access to a state-guaranteed means of digital payment while ensuring resilience and soundness of the monetary system.