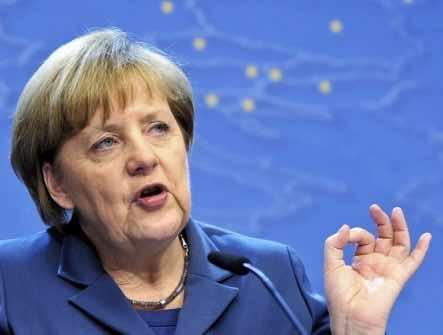 Looking back at 2005, the year Angela Merkel entered into office, it seems like a different world – especially when remembering her counterparts: George W. Bush, Tony Blair and Jacques Chirac. They all belong to a distant past. Twelve years on, she is still in office and preparing her re-election in September. She just received the backing of her party, which confirmed her in December 2016 as chair of the governing Christian Democratic Union (CDU), and candidate for the chancellorship.

Has she changed throughout her years in office? How has she been perceived by the Germans over time? And what does this mean for the upcoming election?

After winning by only a small margin in 2005 against the Social Democrat Gerhard Schröder, Angela Merkel headed a “grand coalition” with the Social Democratic Party (SPD). She was never a dynamic politician who rushed forward. Instead, at her inauguration she emphasized that her government would be one of “tiny steps”, yet steps in the right direction. At the time, Germans did not exactly know what she stood for. This perception has only changed to a certain extent throughout the years. For example, after agreeing to the SPD’s request to stick to the previously defined goal of closing all nuclear plants within 20 years, she reversed this decision with her subsequent coalition party, the liberal Free Democratic Party (FDP) in 2009. However, she overturned this decision again less than two years later after the nuclear disaster in Fukushima.

This shows two of her main character traits. On the one hand, her political goals do not follow a particular ideology; critics would say she does not have a long-term vision. On the other hand, she is able to review her position and make decisions based on facts.

From 2009 to 2013, whilst governing with the junior coalition partner, she gained in profile and lost some of her potential political rivals in the smoothest way possible. By sending them to Brussels as EU commissioners (the former regional governor of Baden-Württemberg Günther Oettinger), nominating them for Federal President (the former regional governor of Lower Saxony Christian Wulff) or through resignations (the former governor of Hessen Roland Koch, the former mayor of Hamburg Ole von Beust, as well as the ministers Karl-Theodor zu Guttenberg and Norbert Röttgen), – her position in the party as well as in government became more and more incontestable. In 2013 this led to the CDU’s biggest victory in more than 20 years – it was mainly her victory. Whereas the German public could clearly identify what each of the parties stood for in that electoral campaign (the SPD for a minimum wage, the Greens for a so-called “veggie day” and taxing high income earners and the Christian Social Union (CSU) for a road toll for foreign cars), Angela Merkel, with her prominence, was her party’s main asset. Therefore, the most effective yet simple phrase she expressed to German TV audiences was “You know me”. People seemed to be familiar with Merkel’s figure and trusted her as a leader.

Domestically, she went against her own party’s manifesto on several occasions by making concessions to her coalition partners or reviewing positions based on current facts. Under her governments, the CDU decided to end the country’s reliance on nuclear power, abolished compulsory military service, introduced a minimum wage and allowed dual citizenship. All of these policies went against the traditional CDU party line and were pushed through under her eyes, partly because there was a large consensus on such issues within German society. Thus, she was able to sense this spirit among the public and translate it into policy.

However, the biggest challenges she has had to face were on the international stage.

It was under her leadership that first the financial crisis and later the debt crisis, mainly in Greece, were managed and eventually kept under control. She insisted on tough austerity policies to be applied in highly-indebted countries, which made her a figure widely criticized and even hated by the people who suffered under these measures. However, Angela Merkel also insisted on bending the rules if necessary in order to keep Greece in the Eurozone. She certainly never wanted the euro to fail, or as she put it, “If the euro fails, Europe will fail.” This tough but determined stance abroad earned her recognition at home. And her rise in power should be seen in relation with her political mentor Helmut Kohl, under whose chancellorship she served as minister in two terms. He was a fervent supporter of the European project and it is certainly in this light that her stance on European matters should to be understood.

Given Merkel’s longevity as head of government and as the German heavyweight in Brussels, she is arguably the most powerful politician in the EU. The most important moment of her current mandate came in September 2015 when the wave of asylum seekers reached its peak. In the German media, there was rising discontent with the management of the high influx of people seeking refuge, also given the fact that many did not seek asylum based on the Dublin Convention criteria. These stipulate that people must apply for asylum in the first EU country they set foot in. However, she bent the EU rules and allowed thousands of asylum seekers (mostly from Syria and stranded in Budapest) to come through Hungary and Austria to Germany. Not only did her coalition party, the SPD, support this decision, but the opposition parties, the Greens and the Left largely backed it as well, which reflected a large consensus in the German public. However, her sister party, the CSU from Bavaria, bordering Austria, as well as the right-wing populist Alternative for Germany (AfD) disagreed and strongly criticized the move. In this matter, Angela Merkel was certainly influenced by her experience in the former German Democratic Republic and the severe travel restrictions that were in place until reunification.

It is in the context of the refugee crisis that Angela Merkel voiced what was possibly the most memorable phrase of her chancellorship “Wir schaffen das”, which can be translated as “Yes, we can” (although stated in a less enthusiastic way than across the Atlantic) or “We will manage”. This led to the atypical situation in which she was praised by her political competitors who emphasized the German welcome culture and criticized by her natural allies from the CSU or even from within her own party. While her allies point out the technicalities of not being able to manage the number of incoming asylum seekers, her critics from the (far-) right emphasize that they do not even want to be able to manage it for ideological reasons. With this phrase, the Chancellor wanted to transmit optimism and self-confidence to the German people, yet her words were often reproduced in an abbreviated form and interpreted as “hollow”.

Outside politics, Merkel does not really portray herself as a private citizen and does not reveal much of her personality, unlike many other politicians. Only very little is known of her personal life, such as taking hiking holidays in Italy, enjoying opera or not sharing the surname of the man she is married to – a chemistry professor virtually unknown to the broader German public. Glimpses of Merkel’s emotions can be spotted at her appearances in football stadiums supporting the German national team. A touch of proximity has been documented when she congratulated the team, or when she took “selfies” with refugees. However, her general lack of a certain type of charisma will not be crucial for her re-election.

In fact, as the journalist Heribert Prantl puts it, her charisma may consist of not having any. Instead, Germans are more interested in security, safety, predictability, and in being able to trust their Chancellor. Especially given her unpopular competitor for the chancellorship, SPD chair and Minister for Economic Affairs Sigmar Gabriel, she is very likely to transmit this sense of security. She may not be able to reach out to her most conservative voters, who are still concerned with the influx and integration of immigrants from the Middle East, but her popularity and her pragmatism also appeal to the large electorate in the center.

According to the most recent Politbarometer, Angela Merkel remains the third most popular politician in Germany, after Foreign Minister and federal president to-be Frank-Walter Steinmeier and a regional governor (the Green Winfried Kretschmann from Baden-Württemberg). All polls show the Chancellor’s party in the lead by a large margin, and in a head-to-head poll with her competitors, she comes out as a clear winner. However, polls also show that security and the refugee crisis will shape German politics in 2017, which means delivering concrete measures and not just relying on her popularity.

Whether Angela Merkel will end up forming another coalition with the Social Democrats or trying to govern with the Greens, it is very likely that in 2018, the world will see her sitting next to Donald Trump, Theresa May and François Fillon at the G7 Summit and cheering for Germany at the FIFA World Cup in Russia.

Adrian Eppel is a PhD candidate at the Freie Universität Berlin. In his research he focuses on elections, electoral campaigns and the emergence of new political parties across Europe. Before working as a media analyst in London, he engaged in the promotion of regional democracy in Mozambique as well as at the Assembly of European Regions in Strasbourg.

Greece’s political paralysis and the danger of superficial consensus