Alexandria Ocasio-Cortez’s upset victory over incumbent Joe Crowley in the Democratic primary for New York’s 14th Congressional district is arguably the most surprising, and certainly the most hyped, episode in the current election cycle leading to the 2018 midterms this November. At a glance, the sudden rise of the 29-year-old Bronx native, a Democratic Socialists of America activist of Puerto Rican descent who combines a progressive, Bernie Sanders-like agenda on economic and social issues with a strong emphasis on immigration and race seem to be just another chapter in the old story of American party politics.

At least since the New Deal coalition forged by Franklin D. Roosevelt in the 1930s, Democrats have been better than Republicans at representing minorities, promoting inclusive policies, and giving voice to progressive forces – and they still are, only more so. At a closer look, however, this New York primary suggests that there might be something new under the sun, especially as it seems like part of a larger trend bringing young, progressive minority candidates into the national spotlight.

In strictly electoral terms, Ocasio-Cortez’s success story should not be overrated: the demography and politics of her district, including areas of the Bronx and Queens, are quite unique and what is a typical New York story can hardly be replicated at the national level. Yet it is telling of a political climate in which the interplay between immigration and white America is affecting politics in new ways: first, at a time when racially-coded language is again ubiquitous, attitudes on immigration are an increasingly reliable indicator of voting behavior, especially on the right, and, second, they reflect and reinforce the general trend toward greater polarization. In other words, the surprising win of a relatively unexperienced and radical candidate – one of her trademark proposals is the abolition of  Immigration and Customs Enforcement, the federal agency responsible for the identification, detention, and deportation of undocumented immigrants – and the shockwaves it sent throughout the nation would be quite unlikely without the very unusual mobilization of young minority voters in the primaries, in New York City as well as across the country, in response to Donald Trump’s anti-immigration policies and dog-whistle rhetoric.

Data shows how immigration is becoming a polarizing issue. A majority of Americans ranging from 52% to 58% according to different polls disagrees with the policies of the Trump administration on the issue, from the Muslim ban to the spike in deportations. However, almost 60% of Republican voters have supported even the most controversial of those policies, that is the separation of children from their families crossing the US-Mexico border illegally and their detention. According to a Huffington Post/YouGov poll, 55% of the GOP base see immigration as a priority, more relevant than the economy (it was 43% in March), compared to 19% of Democrats (10% in March). 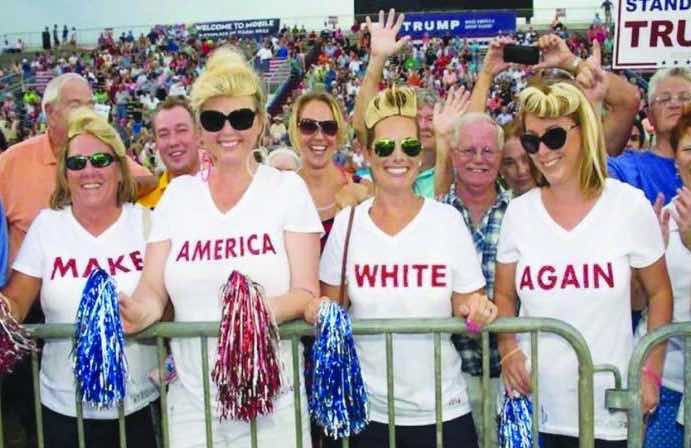 Trump’s “zero tolerance” approach seems to be paying off, at least as a device to keep a hold on his constituency. According to an early July presidential tweet, a Democratic sweep in the November midterms would lead to a massive spread of drugs and Latino gang violence, as well to the loss of “jobs and benefits” for “hard-working Americans”, that is working-class whites in the language of right-leaning political campaigns. “Anarchy, amnesty, and chaos” on one side, “law, order, and justice” on the other, according to a binary narrative that is exactly the opposite of the bipartisan approach needed in Congress to make significant progress toward a comprehensive immigration reform.

Trump’s tweets are part and parcel of a presidential discourse blending restrictionist and often xenophobic views on immigration with a call to arms in defense of white identity, allegedly threatened by economic, cultural and national security foes. Was this white nationalism more important than the economic decline of slices of blue collar America in tilting the 2016 elections toward the Republican candidate? While this is still an open question, studies like that of Diana Mutz published in the Proceedings of the National Academy of Sciences last April show that status insecurity more than economic exclusion is a defining feature of important segments of Trump’s constituency. What is relevant here, however, is the crucial role immigration plays in shaping a cultural and political clash around white America whose impact on recent political discourse seems unprecedented. Putting things in historical context might shed light on the deep roots of this quite unexpected turn.

To be sure, there is nothing inevitable or preordained in this GOP embrace of an unabashedly hard line on immigration. The so-called 1986 Reagan amnesty, which benefited a good share of the more than three million undocumented immigrants living in the United States at that time, did not trigger any significant backlash within the GOP. In 2004, George W. Bush made it to the White House also because he was able to garner almost 40% of the Hispanic vote (with Mitt Romney in 2012 it went down to 27%). And up until 2013 Republicans were effectively selling their own brand of a diverse America, as they boasted more Latino governors and senators than the Democrats. However this conservative, family values-based view of a multicultural nation never came to terms with the color line, that shifting divide between white and black America that often runs deep under the surface of American politics and now is back in full sight.

The 1965 Immigration and Nationality Act, which dismantled racial barriers dating back to the 1920s and opened American shores to immigration from extra-European countries, and more importantly the civil rights movement, which led to the end of segregation in the American South and paved the way to affirmative action policies, generated a backlash that found its clout in Richard Nixon’s silent majority. White ethnics, including sizable chunks of the Italian American community, were part of this reaction and became full members of a conservative coalition built on the color line. That coalition, just like the culture wars that had generated it, in many ways is still with us.

It was certainly not Trump who found out that white nationalism can glue together Americans from different socio-economic and ethnic backgrounds. Yet it is with his tenure at the White House that the GOP is subscribing to a white nationalism fueled by an anti-immigration agenda that was out of the political mainstream only a few years ago.

It is quite possible to relate this turn of events to the widespread fears and anxieties unleashed by the prospect of America as a “majority minority nation”, that is a country in which non-white minorities combined outnumber whites (it is already the case in California, Hawaii, New Mexico, Nevada and Texas). A prospect that for many is all the more realistic and terrifying after the two mandates of Barack Obama in the White House.

Marco Mariano is associate professor of American history at the University of Turin. His research fields are American foreign policy, inter-American relations and Atlantic history. He has been a visiting scholar at Columbia University and New York University. His latest book is a history of the Monroe Doctrine (Carocci, 2013).