Idlib: The Yalta of the Syrian conflict?

Idlib, an Aramaic word composed of “Adad” (God) and “Lib” (Center), means “The center of God”. It is also the name of the capital city of a province (that carries the same name) in northwest Syria near the Turkish border. To the west, it overlooks the Syrian coastal city of Latakia, which hosts the Russian naval base. In recent years, the city went from being “The center of God” to becoming the center of the revolt against the Syrian regime of Bashar al-Assad.

When the protests against the Damascus regime erupted in 2011, the province of Idlib became the symbol of the anti-regime rebellion and today it is considered the main stronghold of rebel groups, including jihadists. In 2015, the Syrian regime lost control of the city, which soon became the safe haven of jihadists who survived their expulsion from Raqqa. This strategic aspect along with the presence of Kurdish forces in the west, regime forces in the south, and the city’s proximity to the Turkish border, places Idlib at the heart of a possible change of course in the Syrian crisis. If the regime forces conquer the city, it would mark a final victory for Assad following seven years of war. 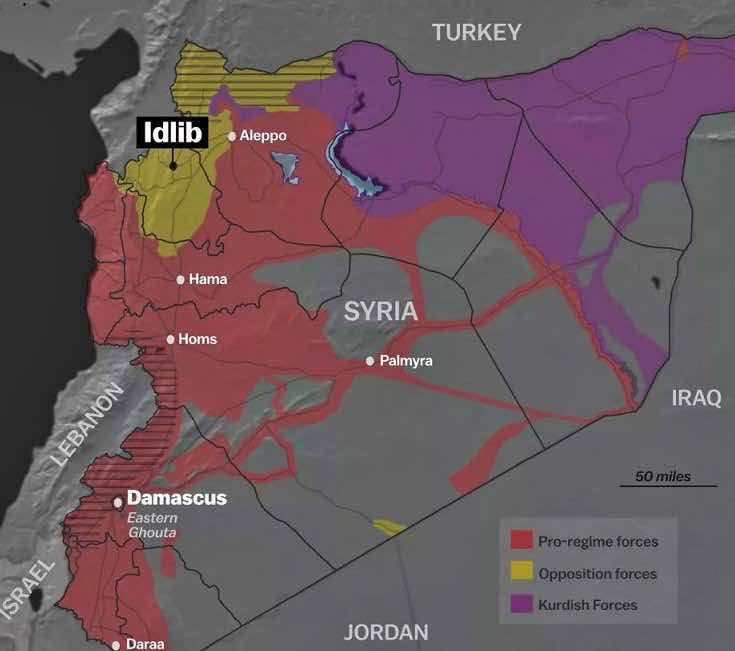 Idlib is not currently controlled by a single rebel group. On the contrary, it is ruled by a series of factions that are often rivals and are divided between “secular” groups and jihadists. About 70,000 anti-regime fighters are believed to be in the city. Among those are two dominant factions: Hay’at Tahrir al-Sham (HTS – Levant Liberation Committee) which is Al-Qaeda’s wing in Syria, and the National Front for Liberation (NFL), which was founded in May 2018 and is supported by Turkey. The NFL includes 11 rebel factions, some of which are Islamists.

Following the recent military victories achieved over the rebels by Assad’s forces and the decisive military and logistic support from Russia, Iran and Hezbollah, the Foreign Minister of the Damascus regime, Walid Muallem, made a statement on August 30, 2018 in which he declared, “Now, the government’s priority is to liberate Idlib.” Stated as such by the regime, this could only signal the launch of a major offensive to remove the military and non-military factions that oppose the government of Damascus. The statement, which was coordinated with Russia, placed Turkey on high alert leading the country to deploy around 1,300 troops to Idlib to monitor a previous ceasefire agreement. The comment is also concerning to Turkey because it has been hosting more than three million Syrian refugees since the beginning of the war. A renewed offensive could drive a new wave of refugees toward the now-close Turkish borders, and it could generate another humanitarian crisis that could consequently affect Europe as well.

These fears drove the UN special envoy for Syria, Staffan De Mistura, to urge the parties involved in the conflict, including Russia, Iran, and Turkey, to prevent a new offensive in Idlib. De Mistura’s proposal was twofold: to initiate talks in an effort to find a political solution and to create a humanitarian corridor to allow civilians a safe way out. On September 17th, Turkey and Russia reached an agreement in Sochi that entailed the creation of a demilitarized buffer zone around Idlib in order to separate government and rebel forces.

The outcome of the agreement will be evaluated after October 10th, which is the deadline imposed by Russian President Vladimir Putin and Turkish President Recep Tayyip Erdoğan for the withdrawal from the buffer zone of all heavy weapons belonging to rebel groups while jihadist groups were given until October 15th. A question mark continues to loom over the city of Idlib, where several rebel groups are still based. However, according to the plan, they should be allowed to leave the city. The foreign ministers of Russia, Turkey, and Iran have met in New York to discuss the new agreement on Idlib and lay the foundation for a new roadmap that could lead to a political solution in Syria. The seven years of war in Syria have brought on drastic changes that are not uncommon in Middle Eastern politics, so it is hard to predict the post-ultimatum phase. What is certain, however, is that no foreign power, including the international community, Russia, and Turkey, has any interest in seeing the Syrian regime launch a military campaign in Idlib.

With the military defeat of the so-called Islamic State, the military victory of Assad’s regime – or in other words the Russia-Iran axis – the Syrian civil war might enter a new phase following the agreement on Idlib. There are three hotspots in Syria: Idlib itself – (the rebels’ stronghold), the Golan Heights, and a few areas near the Iraqi borders. The real game, however, is the one being played at a foreign table with the participation of Iran, Russia, Israel, and Turkey. These four countries, along with the US as a spectator in the background, will decide the future of the country.

The key question is whether Assad can continue to control the country in its entirety, or which balance of power will emerge to guarantee some form of governance. Even if the Assad regime survives these seven years of war and continues to rule, it will be impossible for him to maintain the same kind of control he had prior to 2011. Furthermore, there are currently no viable replacements for Bashar al-Assad especially since Russia and Iran are not willing to jeopardize their military victories by allowing an orthodox Sunni entity to seize power and put their interests in the region at risk. Considering all these factors, the upcoming transitional phase in Syria could hold divisions that might not be legislatively implemented but could be imposed based on ethnic and religious realities.

Bernard Selwan Khoury is the Director of COSMOnitor (the Center for Oriental Strategic Monitoring) and Deputy Director of OGMO (the Middle East Geopolitical Observatory) in Rome. He teaches Arab and Middle Eastern affairs at various institutes and is a political commentator for RAI, the Italian national television network, and the Vatican Radio.