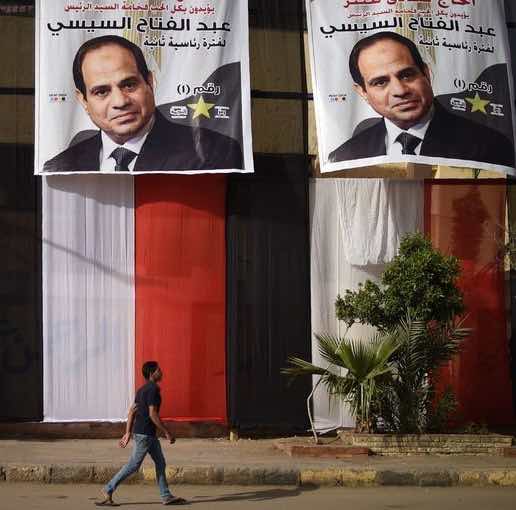 A few minutes at the polling station is not too high a price for Egyptians to pay to express their gratitude for the policies implemented by President Al Sisi during his first term in office and confidently vote him in for a second and final term. Rather than competitive elections, the cornerstone of this presidential election was deliberately designed to be voter turnout. Nevertheless, and despite the fact that the Egyptian media had been heavily urging Egyptians to vote for weeks, participation rate in the election was less than 40% of all eligible voters (as opposed to about 50% in the last two presidential elections).

The widespread boycott of Egypt’s 2018 presidential election was not only due, as many rightly argue, to the absence of competition; it was, above all, a clear, well thought out message that many Egyptians wanted to send to the incoming president! In my opinion, two major factors affected the moderate voter turnout: how Egyptians feel about the President’s achievements during his first term in office, and the way the election was designed solely to endorse Egyptians’ admiration for Al Sisi.

The President’s achievements are a subject of much debate among Egyptians, and the single point of agreement on this issue concerns the long-term yields of the projects launched vis-à-vis the current deterioration of Egyptians’ living standard. The election was designed to pay tribute to the President by only enabling an unknown candidate (a clear supporter of the President) to masquerade as the sole “challenger” to Al Sisi. The plan was to offer the entire political arena to the incumbent so that Egyptians could reward him – but they somehow declined.

Al Sisi, who did not offer Egyptians a concrete program prior to his election to his first presidential term in 2014, had stated clearly that he intended to boost Egyptians’ incomes in the first year or two of his tenure, then launch his economic reform program so citizens could easily accommodate the burdens of transition. In practice, his economic policies have led to a substantial deterioration in people’s living standards, dampening his supporters’ enthusiasm to endorse him, whereas a large portion of Egyptian society has been opposing him from day one.

Meanwhile, the Egyptian state’s decision to attract more voters by running an election with a carnival theme concluded in a few girls dancing to the tune of Egyptian patriotic songs outside empty polling stations, deserted throughout the long voting period (12 hours a day, for three days). These tactics, along with the transferring of voters from their respective work places and factories to the polling stations, resulted in wasting billions of Egyptian pounds (in a developing nation with inadequate growth) on an election whose outcome was known beforehand.

It is now clear that anyone  who believed that Egyptians would turn out to vote in large numbers are living in a delusionary state. Politics in Egypt is founded on mutual paybacks between the state and its cronies. The latter ran a heavy advertising campaign for Al Sisi as portrayed in the large number of promotional billboards and banners erected in his support, wherein each crony displayed his name and photo next to that of the President, so as to get some sort of publicity in return. The majority of citizens played no role in the campaign.

Egyptians today are drawing comparisons between economic and political conditions during the Mubarak and Al Sisi eras; the results clearly favor Mubarak. Untrustworthy media professionals and politicians who have been milking our nation for years cannot stimulate ordinary citizens to vote under such overall conditions. Some flatterers acknowledged the deficiencies in the ruling mechanism, but urged Egyptians to forgive these unintentional errors and to still participate in the elections.

In the context of a straighforward policy of eliminating his opponents, President Al Sisi’s main dilemma during his first term in office has been that he only notices the positive aspects of his mandate, playing down the negative consequences of his overall political and economic policies that have impacted middle and lower-class Egyptians. The Egyptian state, meanwhile, committed a fundamental error by thinking that it could depoliticize Egyptians for four years and then switch on their sense of political patriotism for a few days of voting – before turning it off again.

21 million people voted for the President, leaving him with the liability of the roughly 35 million voters who boycotted the election. President Al Sisi, who will naturally thank his supporters, needs to contemplate the message expressed by the majority who declined to take part in this carnival – especially since the youth, who account for over two-thirds of our population, was the principal force behind this boycott. These are the key challenges that Al Sisi faces in his second and final term – and he must address them differently.

Mohammed Nosseir is an Egyptian liberal politician who advocates for advancing liberalism, political participation and economic freedom. Nosseir was member of the higher committee at the Democratic Front Party from 2007 to 2012, followed by being a member of the political bureau of the Free Egyptian Party till 2013. Nosseir has provided the Egyptian government with a few schemes to reform its government institutes, based on producing entrepreneurial creative ideas that aim at challenging the political, economic and social status quo. He regularly writes on government reform and business issues, placing several articles every month at each of Daily News Egypt, the Globalist, Al Arabiya, Arab News, Entrepreneur, and Inc. Arabia. Nosseir is also the managing director of Global Marketing Consultancy, based in Egypt, working with many international and regional companies assisting them to expand their businesses in the Middle East.

The age of ports: Gulf monarchies and sea rivalry