Florida has adopted a less aggressive covid-19 containment strategy compared to many other US states. And it has been heavily criticized. What has Florida done differently from other US states? Why has it been so harshly criticized? And how are things playing out now?

Florida leaned against a state-wide lockdown…

Florida was the third US state to record a confirmed Covid19 case, on March 1st. Yet it did not issue a statewide stay-at-home order until April 3rd, over two weeks after California and twelve days after New York State. Governor DeSantis was very outspoken in stressing his concern that a statewide lockdown would cause substantial job losses, and advocated a more targeted approach, recognizing that some areas of the state were more severely affected than others.

Florida did enact a number of targeted restrictions, shutting down movie theaters, gyms, parks and restaurants. Several of the state’s largest cities and counties ordered people to stay home, and the Governor issued a stay at home order for South Florida on March 30. But critics argued that his refusal to decree a statewide lockdown would lead to a heavier death toll.

…but moved early to protect the elderly

So already at the beginning of March care homes for the elderly had adopted precautions that included sanitizing procedures and screening visitors. Some care homes stopped family members from visiting, some took temperatures of residents and staff members on a daily basis, some stopped residents from getting together in common areas. The state government also created Rapid Emergency Support teams to quickly assist elder care facilities when residents or staffers test positive for Covid-19.

Compare this to states like New York, California and New Jersey that instead forced nursing homes to readmit covid-infected residents, according to the New York Times. Yet the crisis responses by New York Governor Cuomo and California Governor Newsom have been effusively praised by the media, whereas that by Florida’s DeSantis has been vilified.

If we apply these percentages to the latest death count, the results are staggering: As of April 30th, the Covid Tracking Project reported a total of 1,290 covid-19 deaths for Florida; 29% of this would imply 378 fatalities in care homes. New York State had reached 18,321 deaths; 58% would give 10,626 fatalities in care homes. So if the NPR figures are correct, the fatalities in New York care homes were 28 times those in Florida’s – and Florida has a larger population (22 million to New York’s 19) and a 4 percentage point higher share of elderly people.

These numbers strongly indicate that Florida’s targeted strategy worked: Florida is a “safe country for old men” (and women, though men are statistically more affected). A lot safer than New York.

Florida’s critics warned the state would pay a very high price for not imposing a stay-at-home order until very late in the game. That has not happened. The chart below shows covid-19 cases and deaths per million people for the fifty US states; the size of the dots is proportional to the states’ population. (Most data in these charts are as of April 28, source is the Covid Tracking Project).

Florida looks very much in the middle of the pack. With 52 deaths per million, it has a mortality rate that is about one quarter of the US average – and close to 20 times lower than New York.

Is the worst yet to come?

It seems unlikely. Like in the rest of the country, Florida’s daily fatalities seem to have peaked at a relatively low level.

Was Florida’s strategy right only for Florida?

Unlikely. After the predicted disaster failed to materialize, some have argued that Florida benefited from having more single family homes and less public transport. In other words, it benefited from lower population density and lower reliance on public transport. This makes intuitive sense, but the evidence I have found so far is not compelling. For the main US cities, the correlation between population density (people per square mile) and covid mortality seems strong: 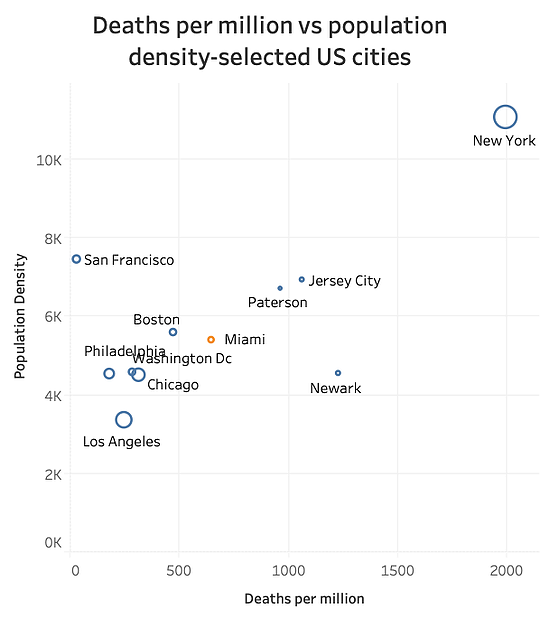 Take out New York City though, and the correlation looks a lot weaker. San Francisco, the second densest city, has the lowest mortality rate (perhaps thanks to its under-developed public transport system). 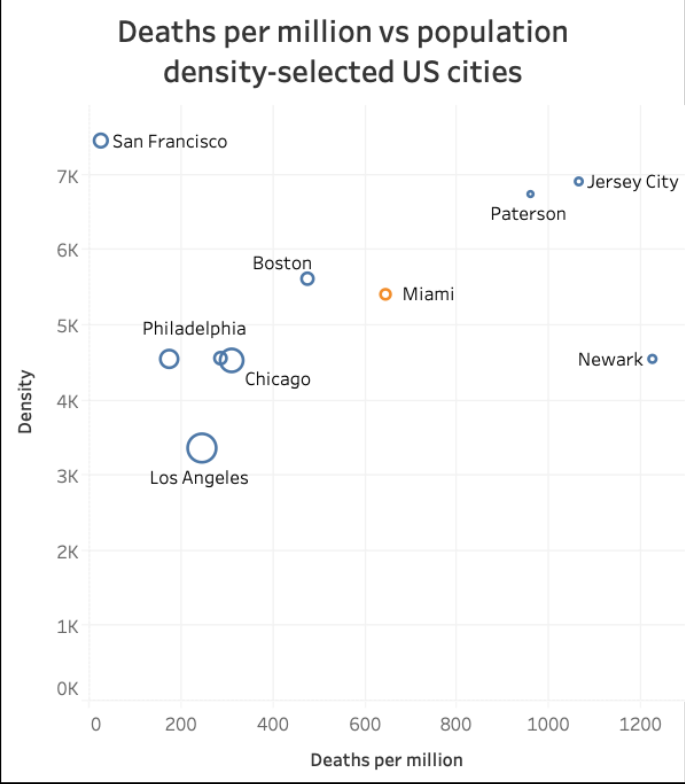 For states, the correlation to me looks weak; Florida has a mortality rate similar to that of many less densely populated states. 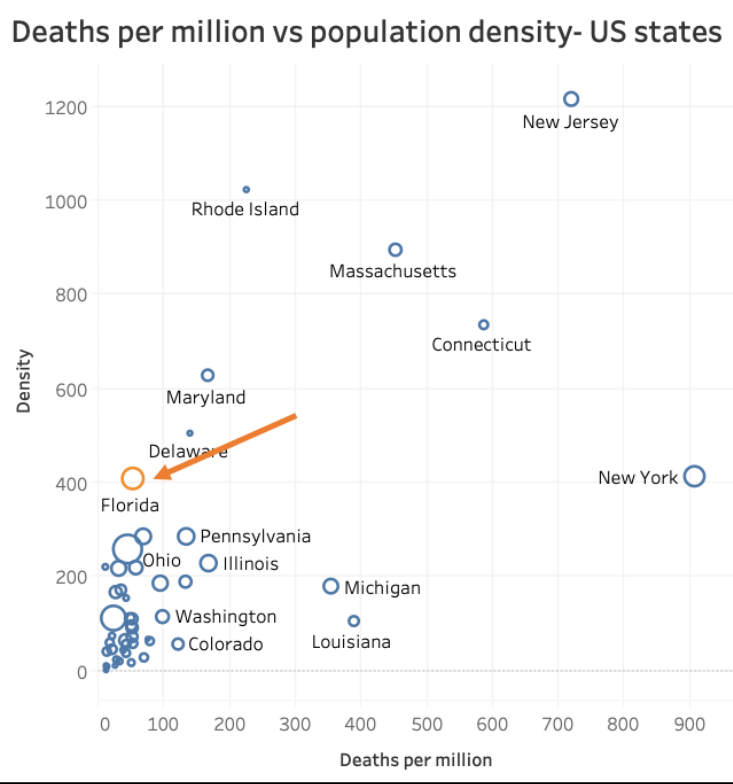 What lessons should we draw?

The first lesson is that the criticisms of Florida’s policies have been knee-jerk and biased, rather than based on a factual assessment of the data and of what Florida was actually doing. Florida did adopt social distancing and localized stay at home directives. But because it refused to follow the dogma of a statewide lockdown, and because Governor DeSantis dared expressed concern for the employment consequences of a shutdown, its strategy was vilified as reckless.

Now look at the two charts below. The horizontal axis is a timeline of when statewide lockdowns have been implemented. It starts with California on March 19, which I take as Day 1; Florida is on Day 16 (April 3). At the right end you have states that, to my knowledge, have never adopted a formal state-wide stay at home order (though they did implement social distancing measures). The first graph has deaths per million people on the vertical axis; the second has cases per million people. Let me cut to the chase: There is no correlation between the speed of lockdown and the impact of the virus. 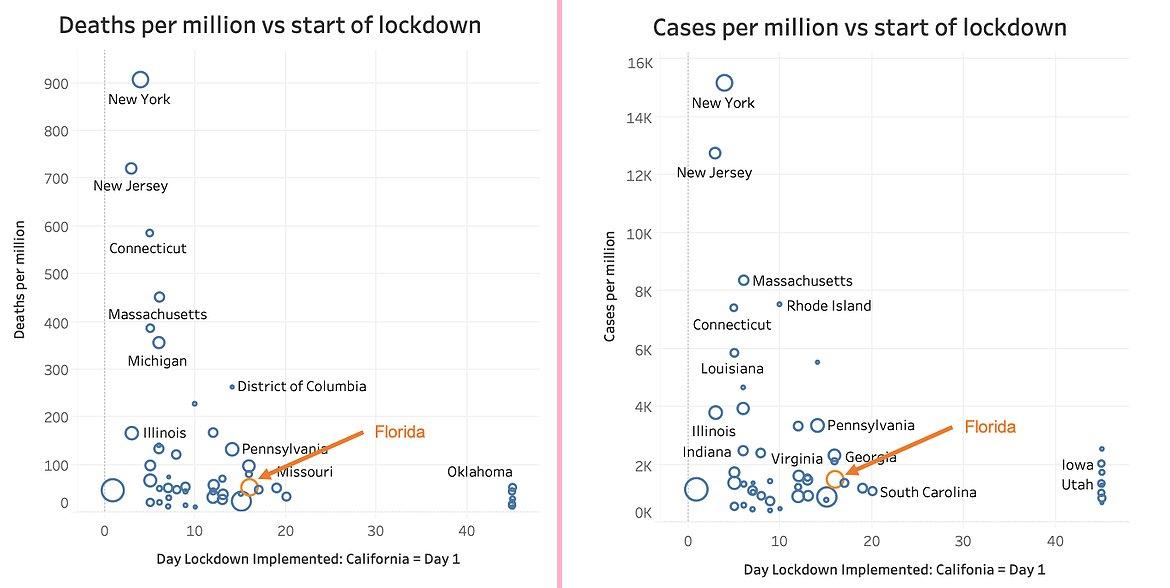 Targeted measures can be as effective as a total lockdown—and a lot less disruptive and costly.

Why does this still matter?

After all, the media now conveniently ignore Florida. So, shouldn’t we let bygones be bygones?

Because we are now repeating the exact same mistakes. As some states move to reopen their economies, they are being crucified for not waiting longer, presumably for the all-clear issued by some omniscient medical authority.

Taking a scientific, data-based attitude to this crisis requires us not to place blind faith in one set of blanket prescriptions while ignoring the facts. It requires admitting that many of our experts’ predictions and models were wrong and that one size does not fit all, that we need more targeted strategies.

Today, we need a rational debate on how to safely reopen the economy, not the same fearmongering polarization with which we shut it down.

Marco Annunziata is Co-Founder of Annunziata + Desai Advisors, a consultancy on economics, innovation and business strategy, and Visiting Professor at Singapore Management University. He is a TED speaker, author of The Economics of the Financial Crisis, and co-host of the M4Edge tech podcast.

Nigeria and the virus: the giant on the brink