Under the surface of the “blue wave”

Democrats are expected to win big in November’s midterm elections. The ‘enthusiasm gap’ is definitely in their favor, given the chance to rebuke and hamstring Donald Trump, and the generic congressional ballot, which has historically been a good predictor of success in the fall, shows Democrats with about an 8-point lead as of mid-July. Yet there have also been some conflicting signals over the past two months, starting with the President’s approval rating being close to what it was when he took office, and the strength of Republican candidates and their money machine across the country.

Apart from the horse race analysis, the fundamental issue in U.S. politics at this time is how the Democratic Party is reacting to the realignment that emerged in the 2016 elections, when the right-left division became less important than the establishment-outsider split that played out in both parties. Just a few months after the election, much of the media chatter had already reverted back to the questionable paradigm of “serious” people versus the crazy, racist, misogynist, corrupt Trump, following the same script that drove coverage of the presidential election. In theory it could seem more appropriate now, because opposition to Trump seems stronger, and people will avoid being caught off-guard again; but that hardly means that the underlying problems that drove the populist vote have been solved, on both the economy and foreign policy. Rather, papering over the epochal challenges reflected by the revolt of the voters across the Western world in the past two years thanks to strong anti-Trump sentiment, risks exacerbating the structural problems in the long-run, embracing short-term victory for the establishment forces, at the expense of long-term health for both the United States and the world as a whole. 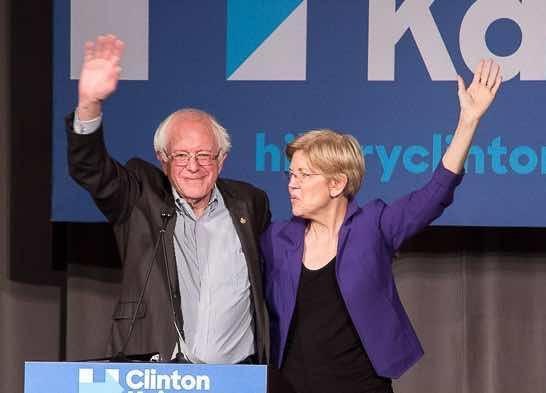 In this context we can look at the split between the centrist and progressive wings of the Democratic Party. The former is more closely identified with institutional Democrats close to the Clinton machine – that still heavily influences the national party structure – and the latter with figures such as Bernie Sanders and Elizabeth Warren, both strong voices against economic inequality and the excesses of Wall Street.

The contest can roughly be defined as between two different views of the current political divide: one aims to challenge the Republicans by rallying voters principally around opposition to Trump, while the other seeks to use the moment to effect a fundamental shift in economic policy away from the so-called free market paradigm of recent decades.

The two sides generally agree on issues such as immigration, LGBT rights, and the environment. Strong differences arise, however, on the boldness of their economic proposals, just as happened during the 2016 Democratic primaries. Progressive candidates call for Medicare for all, free college tuition, and strong regulations on Wall Street and industry. Centrists promise more pragmatic and incremental steps, not raising “unrealistic” hopes for radical change that cannot be delivered. It is true, of course, that getting things done in Washington is difficult, but often that is because politicians are influenced by special interests, on which many depend for financial support. Voters know this, and are increasingly unwilling to give their representatives a pass.

The successful campaign of 28-year old Alexandria Ocasio-Cortez for the Democratic nomination for Congress in New York’s 14th district shows just how popular a “radical” platform can be. In addition to her progressive positions on healthcare and education, the other three items at the top of her policy list were: housing as a human right, paid family and sick leave, and even above those, a “universal jobs guarantee”. The last point is an issue rapidly gaining traction among progressives around the country, calling for the federal government to ensure that everyone who needs a job can get one, with a $15 minimum wage and full benefits.

Ocasio-Cortez shocked many with her victory over long-time, well-funded, Representative Joseph Crowley, but she did it in a heavily democratic district. That’s important, because it shifts the discussion within the party, leading national hopefuls such as Sen. Kirstin Gillibrand to quickly embrace her, but it tells us little about Democratic prospects to take control of both chambers of Congress. The key question is if such strong progressives can do well outside of their element, in areas which are usually considered battlegrounds for independent voters or even lean Republican.

How progressives fare in other primary elections still to come may give a better indication of the national trend. Those include James Thompson’s campaign in the 4th Congressional District in Kansas, for example, and that of Abdul El-Sayed for governor in Michigan. Ocasio-Cortez is already stumping for these candidates, along with even bigger names such as Sen. Bernie Sanders.

The November election is not far off, but if progressives are able to build on their recent wins, the national dynamic will undoubtedly be affected. The shift from an ideological, cultural division in electoral politics towards a split based more on economics, verging on class, will accelerate. Watching the trends and results of progressive candidates in contested districts around the country will give us an idea as to whether content can win over political tactics, contributing to a serious reckoning regarding the problems caused by globalization.

As for Republicans, they can clearly benefit from divisions on economic policy among Democrats. Donald Trump has had great success in addressing the hollowing out of the middle class due to the neoliberal policies that have favored speculative finance over stable, well-paying employment. It would be foolish to once again drink the Kool-Aid pushed by leading journalists and analysts – and in part by the White House itself, for its own tactical reasons – claiming that the U.S. economy is doing great, so everyone should be happy. That’s what got the establishment into this mess in the first place. In fact, although official unemployment is quite low, the structural problems that led to the success of outsider candidates in 2016 are still very much present: low wages, lack of job security and benefits, and high costs for essential services. The Democrats could effectively steal this issue from Trump by adopting a New Deal-type platform with an appeal that goes well beyond the ideological confines of the left.

To listen to the chatter from Washington talking heads and most major media outlets, it seems that Trump is so bad that nobody could support him. Yet Republican voters endorse the President at near-record levels (90%). And while the recent manufactured hysteria over the Helsinki summit seems to have been widespread in the U.S., Trump’s approval numbers seem unlikely to drop significantly. Of course for Democrats, the goal is to energize their base and win over independents. Using personalized opposition to the President as their main battering ram shows that the political debate is still playing out on a level that is decidedly superficial. While the progressive wing seems to recognize the underlying currents behind the populist revolt, most of the party leadership seems content to ride the wave of opposition to a relatively unpopular president.

This will likely be enough to win back the House of Representatives, and gives them a fighting chance at the Senate, but it does a disservice to both the party and the country in the long-term. Lasting, positive change requires serious reflection on the problems of globalization and a foreign policy based on regime change, with a new approach to make America better and stronger in the future.