The summer of protests and how Russia is transforming from within

The summer of protests in Moscow and across Russia has shown that the fight between the Kremlin and the opposition is a long-term game with both sides having their own strengths and weaknesses. The Russian economy is stagnating (real GDP growth surpassed expectations in 2018, reaching 2.3%, but mostly due to oneoff effects of energy construction, and is forecasted to slow down at 1.2% in 2019) at a time when the Russian government is also losing its monopoly over information flows to the Internet. However, the Kremlin still controls a huge security apparatus and vast cash reserves. Moreover, as has been shown with Crimea in 2014, President Vladimir Putin can turn the tables and restore his popularity rather quickly.

Let’s take a close look at the strengths and weaknesses of both the Russian opposition and the Kremlin to see how the situation is likely to develop.

The opposition’s main strength is its sense of moral superiority over the government. The main factor that forced people onto the streets during the last wave of protests was a sense of injustice. During the elections to the Moscow city legislature this summer, all candidates, including pro-government ones, had to collect signatures to be registered. Candidates from the ruling United Russia party decided to run as independents, concealing their real association with the party. All of them had to collect about 5,000 signatures in their districts. In the end, the Moscow election authority registered many pro-Kremlin candidates, who were virtually unknown to the public, while many of the well-established and popular opposition names were denied registration.

That bewildered people, pushing them to take part in rallies, many of them unsanctioned by the government. More than 2,000 people were arrested at these rallies and some were charged with criminal offenses, such as attacking a policeman by throwing a plastic bottle or appearing at four peaceful, but unsanctioned rallies. The charges were arbitrary and not commensurate to what had happened. The utter sense of injustice fueled more protests. On August 10th, the protests culminated with a sanctioned demonstration, when more than 60,000 people gathered in central Moscow. 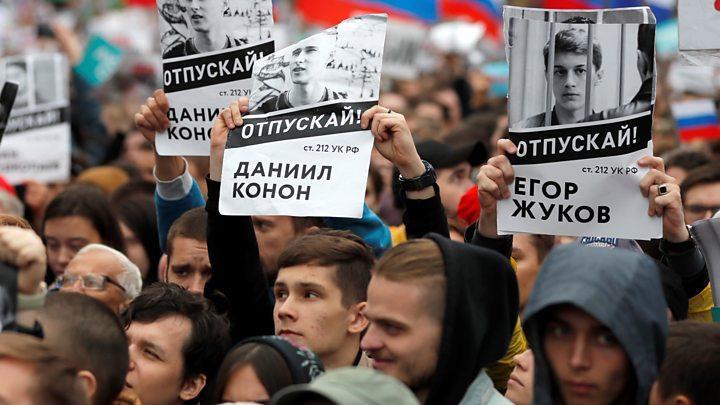 This sense of bewilderment, in turn, would have never been as consolidated if the Russian media landscape had been be as dominated by the state-run propaganda as it was even five years ago.

More Russians are now reading news online than ever before. Opposition members, who were denied registration to run in the Moscow regional elections, were still able to campaign online. They posted videos, live feeds and had sleek websites where their supporters could donate money. Videos of violent and arbitrary arrests by the police at protest rallies went viral online. One of these videos featured four riot policemen in full gear apprehending Pavel Ustinov, a novice actor, who was standing near an unsanctioned rally, looking at his phone to see if his friend was going to be late. One of the policemen claimed that his shoulder was dislocated during the arrest. Ustinov was quickly sentenced to three years behind bars by a court in Moscow. The video, however, sparked a sense of indignation. Numerous Russian actors published statements, calling for the release of their colleague. Many of these actors have millions of followers on Instagram, so while state-run television ignored the situation, it became top news in the country.

Apart from spreading the information, social networks and other digital tools also helped the protesters coordinate their actions. During unsanctioned rallies, the protesters used messaging apps, with the officially banned Telegram being the most popular, to coordinate their route and avoid bumping into a squad of riot police. Groups of protesters quickly pooled together via these apps to help those who were arrested with legal support, food and clothes. They also used apps to educate people about their rights during arrest. A special online map was created with addresses of all police stations in Moscow and the rating of friendliness of their staff.

Finally, and more fundamentally, the Russian opposition benefited from the overall economic situation in Russia. The Russian economy has been sluggish for years with real disposable incomes now more than 10% lower than they were in 2014 before Crimea was annexed and sanctions were imposed. Many Russians grew wary of the situation and feel that Putin is not a President who can turn that tide. Drone footage of lavish palaces belonging to some members of Putin’s inner circle made them only more resentful of his rule.

An ailing economy represents Putin’s main weakness at the moment. However, the Kremlin has its own strengths too. It controls a vast security apparatus that consists of the national guard, the police and also the federal security service. Agents are deployed throughout the country watching for any manifestation of dissent. The Kremlin also has full control of the courts. For instance, Pavel Ustinov’s three-year sentence was quickly reduced to a one-year suspended sentence as public pressure turned strong. During elections, the Kremlin can count on the support of its loyal core – mostly older Russians living outside the country’s biggest cities. It also controls the electoral process – members of electoral commissions work hard to give an advantage to pro-government candidates. In terms of its foreign policy, the Kremlin is still able to score victories, like it did with Crimea or Syria. These victories can be used as propaganda to boost domestic popularity. Despite the rise of the Internet, the Kremlin controls a propaganda machine and pumps more and more money into it.

In a nutshell, the Kremlin controls a vast machine of oppression that manifests itself in all spheres of Russian life. This strength, however, is the Kremlin’s weakness too. Aided by the proliferation of alternative sources of information and digital tools that help them coordinate, Russians are growing increasingly indignant at the use of force by the government. With the economy stagnating under sanctions and a lack of genuine competition, oppression is the only tool the Kremlin is left with to fuel its legitimacy. Elections to the Moscow city legislature made a lot of noise, but the truth is that regional deputies have little control over anything.

In 2021, Russia will hold elections for the State Duma and the Kremlin has every reason to worry that this time the process of holding control over parliament will not be as easy as it was in 2016. The Ukraine crisis and Crimea annexation in particular helped the Kremlin substantially by rallying Russian society around Putin in nationalist fervor. However, the sentiment of triumphalism quickly fizzled out, pushing Putin’s approval ratings from the mid-80s to the mid-60s.

Ahead of State Duma elections in 2021 and the inevitable power transition in the Kremlin in 2024 due to term limits, the Kremlin will need to find a solution to this challenge. So far, Putin’s only answer has been the use of force.