The potential and limitations of Sino-Russian cooperation

Relations between Russia and China may be at their warmest since the founding of the People’s Republic of China, whose 70th anniversary on October 1 prompted Russian President Vladimir Putin to remind Chinese Prime Minister Li Keqiang, during a recent visit to St. Petersburg, that “our country – it was the Soviet Union back then – was the first to recognize a new Chinese state.”

What remains to be seen is whether Moscow and Beijing can leverage deepening economic relations to solve two serious issues: the first is forging a common approach to hostility from the United States; the second issue is managing China’s increasing power projection into Russia’s traditional sphere of influence as well as the areas long coveted by Russia in Europe. The alternative is that the bonhomie between the leaders may end in a repeat of the Sino-Soviet split of the 1960s.

The visit by Li to Russia provided a measure of good news for both countries. Anti-government street protests in Hong Kong over the Special Administrative Republic’s dwindling sovereignty in a “one country, two systems” model, and in Russian cities over the authorities’ manipulation of municipal elections and subsequent crackdown, formed an unpleasant backdrop for the 24th “Regular Meeting” at the prime ministerial level. The two sides congratulated each other for breaking the $100 billion barrier in bilateral trade volume for the first time in 2018 and issued a mutual pledge to double the trade relationship to $200 billion annually by 2024.

Both sides also moved to reassure each other of mutual support against the economic and political pressure the United States continues to exert against them. Li and Prime Minister Dmitrij Medvedev’s concluding communiqué committed Russia and China to stand together against “unilateralism and protectionism” wrought by Washington: “The two sides believe that the current multilateral trading system is facing challenges, trade protectionism is rising and unilateral measures that violate the rules of the World Trade Organization are becoming more frequent.”

Putin has called current Russia-China cooperation “a most important factor in global affairs,” recalling the mutual cooperation against external pressure arising China’s founding in 1949 and the immediate international consequences. The founding of a socialist government in the world’s most populous state extended the Cold War and superpower confrontation across Eurasia and into the Global South. At that time, the Soviet Union was the clear heavyweight in the relationship, and moved to shape the political, economic and security policies of its newly socialist ally. However, changes in ideological and policy priorities in the Soviet Union led Chinese leader Mao Zedong to chafe at the notion of being subordinate to a foreign state, having expelled foreign occupiers and winning a brutal civil war, leading to severed relations between the states.

In 2019, China is the clear economic heavyweight and increasingly a stronger political actor relative to Russia. At the St. Petersburg meeting, Li had to assure his hosts that China will move to align its Belt & Road Initiative (BRI) to Russia’s Eurasian Economic Union, a recognition that as BRI continues to move westward across Russia’s traditional sphere of influence, it will pose a challenge to Russia’s traditional prerogatives. The economic influence of China across the former Soviet Union shows a replacement of Moscow’s role with Beijing’s in Central Asia, a structural change that could result in the region changing its informal grouping from “Post-Soviet” to “Pre-China.”

Data from Comtrade, the United Nations International trade statistics database, show that, with very small exceptions, China has increased its exports to, imports from, and foreign direct investment in, nearly every single former Soviet republic — sometimes in truly astounding amounts. 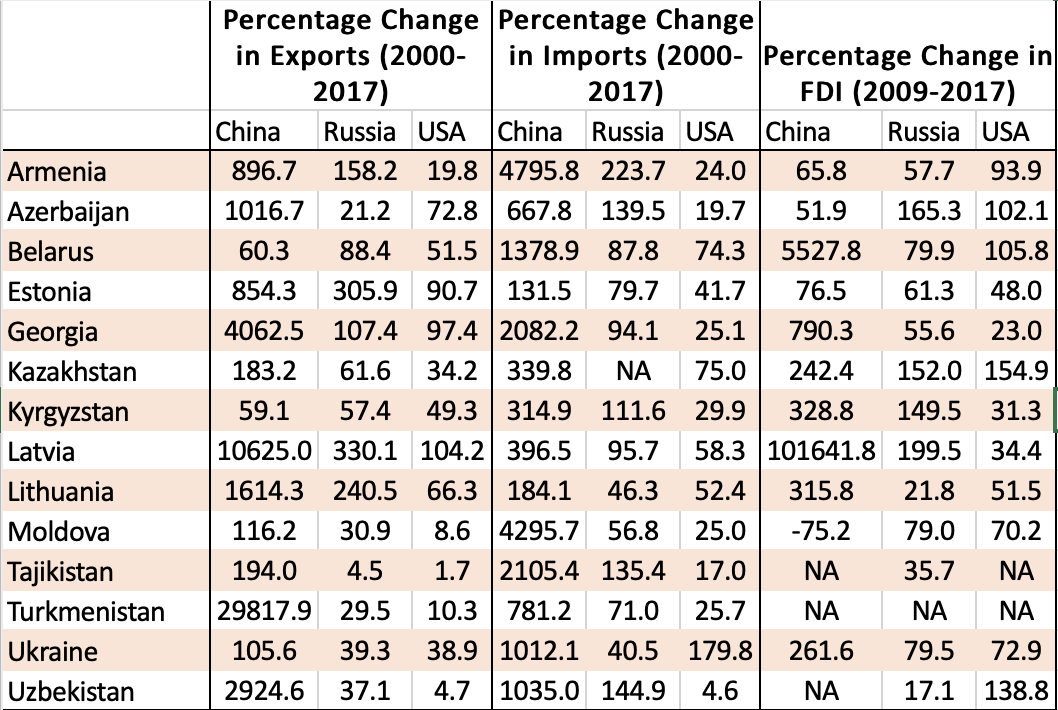 That influence has also extended to security matters. China now participates in military exercises led by Russia, but it is also installing its own military and police bases in areas long under Russia’s actual or desired influence. In Tajikistan, it has opened two military bases.

Much further afield, China has also inaugurated joint police patrols in Serbia. Long considered by Russia to be a natural Slavic ally, Serbia is welcoming Chinese police officers belonging to “multiple departments of public security forces, including police service command, transportation management and criminal investigation… to strengthen communication and mutual trust with their Serbian counterparts, safeguard the security of Chinese citizens and enterprises in Serbia and make contributions to bilateral relations.” As China has invested “5.5 billion euros in Serbia for the construction of bridges, highways and railroads that it plans to use as transport routes for its goods into the heart of Europe,” the police officers symbolize China’s projection of power to protect its investments abroad.

Under current conditions of American hostility to Russia’s foreign policy and China’s economy policy, strategic cooperation between Russia and China can be explained by the common desire to resist US pressure. At the regional level in Europe and Eurasia, however, Russia’s ability to project power has proven resilient, but has reached its limits; China’s ability to project power is increasing in ways scarcely credible even a decade ago.

The Sino-Soviet split of the 1960s occurred because the Soviet Union proved too overbearing for China, but it remains to be seen whether the opposite will prove true. A change in US policy towards Russia would put that to the test.