Solidarity and strategic resilience: the EU facing the Ukrainian exodus

There are several specific reasons why – with 1.5 million people having fled Ukraine in just 10 days – this is “the fastest growing refugee crisis since World War II”.

Russia’s military “pincer maneuver”, that is simultaneously striking an immense territory and several cities, is of course the primary cause. But the scope and brutality of the Russian invasion, as it is cutting flight routes for millions, is also a reason why potentially much larger outflows are temporarily obstructed but could materialize as soon as the situation on the ground is partly stabilised.

Other factors, though, are perhaps even more important in explaining the unprecedented magnitude and intensity of the Ukrainian exodus. Some depend on basic features of the country: one with mainly flat territory, relatively good railways and roads, where most people have a private car.

But international factors probably count even more. Ukraine has long been a large emigration country and millions of Ukrainian families can count on family members abroad. These usually send remittances in normal times, but they can offer refuge when war strikes.

In the last few years, particularly since the 2014 Association Agreement with the European Union, Ukrainian emigration, traditionally gravitating towards Russia, has increasingly been drawn to the West. It is estimated that between 2014 and 2019 almost 3.5 million Ukrainians received first-time residence permits for the EU-28, over 80% of which for working purposes.

The momentum of westbound Ukrainian migration has grown even further since June 2017, when Brussels decided to move Ukraine to the list of third countries whose nationals are exempt from visa requirement. Since then, Ukrainians holding a biometric passport are free to travel in the Schengen zone for up to three months. This has led not only to a further increase in mobility flows, but also to a shift in migration patterns, with a massive growth in (formal and informal) seasonal and circular migration.

The single EU country that profited most from such visa liberalization is Poland, now firmly established as the world’s largest importer of temporary labor migrants, over one million per year (including in 2020, in spite of the pandemic), most of which Ukrainians. 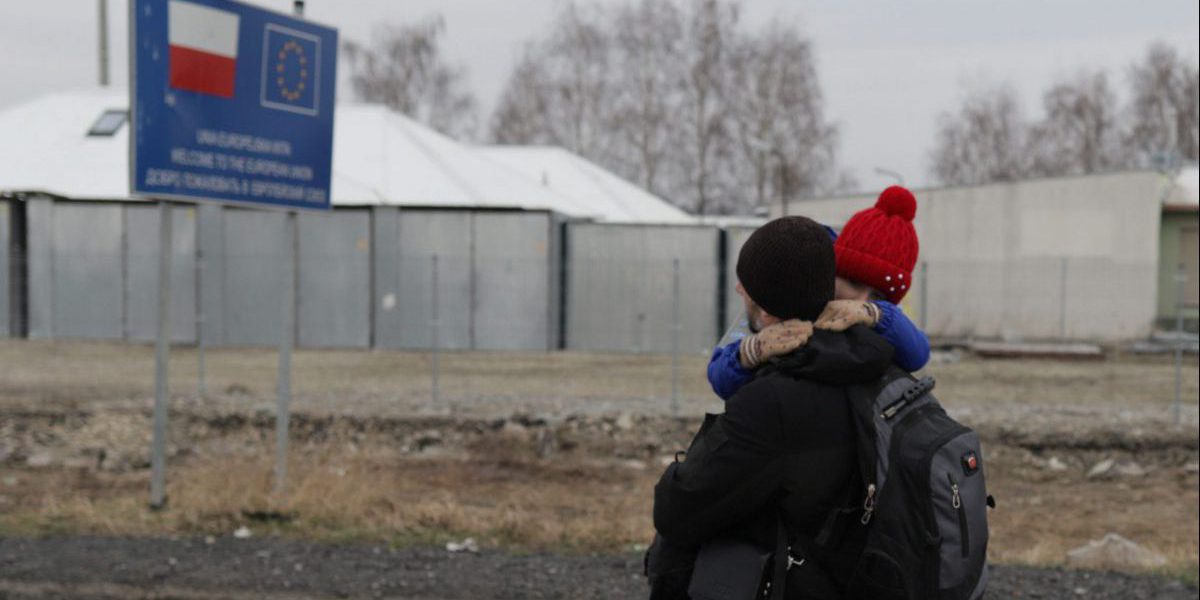 Analysts, decision-makers and public opinions more generally, in the EU and beyond, are bitterly divided on the question whether NATO’s “open door policy” can be included among the indirect causes of this terrible conflict. What is certain, but less widely debated and somehow surprising, is that another kind of open door policy is now being implemented on the ground. The same EU that just a few weeks ago stigmatized (but did not take action against) pushbacks of Kurdish and other forced migrants at the border between Poland and Belarus, is now opening its doors to Ukrainian war refugees.

Hampering or delaying admission to the EU of Ukrainian protection-seekers would have been legally, politically and ethically untenable, due not only to the general prohibition of refoulement in international and European law, but also to the liberalization regime in place. Still, the contrast between current openness and prevalent policy practices at other EU external borders (in particular since the EU-Turkey deal of March 2016) is striking. And it is particularly striking that the vast majority of fleeing Ukrainians (over 1.3 million out of 1.7 million as of 6 March) are currently hosted in three of the four countries forming the Visegrad Group (Czech Republic, Hungary, Poland and Slovakia), a grouping which had played a key role in challenging the Germany-led welcoming approach in front of the massive Syrian inflows of 2015-2016.

While some of the reasons for such double standard (privileging Ukrainians over other refugees) may be understandable, legitimate or even noble, some are more ambiguous, or even blatantly racist. This was made evident, for instance, by some recent remarks by Bulgaria’s Prime Minister Kiril Petkov: “These are not the refugees we are used to […] these people are Europeans […] These people are intelligent, they are educated people […] This is not the refugee wave we have been used to, people we were not sure about their identity, people with unclear pasts, who could have been even terrorists…”.

On the ground, the differential treatment of different breeds of refugees has gone as far as violent attacks against non-white fugitives, as it happened in the Polish town of Przemyśl where African, south Asian and Middle Eastern people who had just crossed the border were attacked and abused by black-dressed members of extreme right Polish groups. This even prompted some African leaders, amongst which Nigerian president Muhammadu Buhari, to raise formal protests asking for equal levels of protection for their nationals fleeing Ukraine, where they had been living as international students or migrant workers.

Solidarity (with refugees) as “strategic autonomy”

Vladimir Putin would have certainly preferred if EU member states had broken ranks over admission and protection of those fleeing the conflict. Maybe, there was even (and still is) a deliberate Russian strategy at play, aimed at “weaponizing” refugees with the aim to weaken European institutions and undermine their policy responses to the military invasion.

Some signals from the field point in this direction, as with accusations by Polish police that “Russians are trying to turn the local population against Ukrainian refugees” by spreading fake news about crimes the latter would have committed.

This would not be an unlikely pattern nor an entirely new one. Just a few months ago, in November 2021, Polish Prime Minister Mateusz Morawiecki accused that the sudden wave of migrant arrivals from Belarus was managed from Minsk but had “its mastermind in Moscow”.

This time, however, at least so far, EU states did not let themselves split by structural divergences of interests in dealing with large scale arrivals. This time, peripheral “countries of first arrival” and less exposed ones, more distant from the conflict, stood united.

Unity of the EU-27 on the potentially very divisive issue of refugee reception is probably what allowed to preserve a sufficiently high level of cohesion (in spite of diverging interests in the energy and trade fields) also when it came to adopt relatively strong joint sanctions against the Russian state. From this point of view, a homogeneously open attitude towards refugees is proving to be a key pre-condition for long invoked (but never achieved) “EU strategic autonomy” and resilience to crises.

Solidarity (among member states): for how long?

So far, the most tangible policy signalof this new and largely unexpected European unity on asylum has been the landmark Council decision 2022/382 of 4 March 2022 “establishing the existence of a mass influx of displaced persons from Ukraine within the meaning of Article 5 of Directive 2001/55/EC, and having the effect of introducing temporary protection”.

Directive 55 of 2001 was adopted in the aftermath of the 1999 war in Kosovo, when a controversial NATO “humanitarian” military intervention had precipitated mass expulsions of up to 1.5 million Kosovar Albanians by Yugoslav and Serb forces toward neighbouring countries. Directive 55, that was never activated during previous crises due to the lack of sufficient consensus among EU states, grants significant rights (entry and stay, work, family reunion) for up to three years for persons who reach the EU as part of a “mass influx”, defined as “a large number of displaced persons, who come from a specific country or geographical area, whether their arrival in the Community [now Union] was spontaneous or aided, for example through an evacuation programme”.

Read also: EU and immigration: still a power game with no winners

The price of EU-27 almost instantaneous consensus on the activation of the joint protection scheme is a clear hierarchy in the level of protection granted to different categories. In the adopted framework, three categories are entitled to EU temporary protection: a) Ukrainian nationals residing in Ukraine before 24 February 2022; b) third country nationals and stateless persons who benefited from international protection (or an equivalent form of national protection) in Ukraine before that date; c) close family members of the first two categories. Other categories, such as legal immigrants holding a permanent residence permit under Ukrainian law, are also entitled to EU or at least national temporary protection status. For still others (temporary and undocumented immigrants fleeing Ukraine), the granting of temporary protection is left to the discretionary power of individual EU governments.

Even with these limitations, the agreement reached on 4 March was a surprise and a policy breakthrough. Now, the crucial question is: how long will it hold? The answer will largely depend on the magnitude and distribution of refugee inflows in the coming weeks and months.

As assessed by the Council itself, future arrivals could vary enormously: “between 2,5 million and 6,5 million […] of whom it is anticipated that between 1,2 and 3,2 million would be persons seeking international protection”, with others benefitting from other legal schemes (Decision 2022/382, proviso 6).

The distribution of such unprecedented number of humanitarian migrants across member states will entirely depend on their own free will, because as visa-free travelers they will remain “able to choose the Member State in which they want to enjoy the rights attached to temporary protection and to join their family and friends across the significant diaspora networks that currently exist across the Union.” (ibidem, proviso 16)

The Council adds that “this will in practice facilitate a balance of efforts between Member States, thereby reducing the pressure on national reception systems.” Unfortunately, this latter assessment sounds optimistic. It is easy to predict that spontaneous distribution will be far from homogeneous. Labour market factors will have a role, but the attractive power of established Ukrainian diasporas might prove even stronger.

From this point of view, Italy, with its 236.000 legal residents (not to speak of large temporary and informal contingents), one of the highest concentrations in the EU, will certainly emerge as an important destination. Of course, EU funds will be available to compensate the main host countries, but it is still to be seen whether this will be enough, once the emotional shock of the war will have waned.