Rethinking aid to Africa as a way to dethrone mainstream assumptions

The interactions between long-term processes of transformations and short-term changes both at national and international levels bring to the surface persisting structural difficulties and, at the same time, new opportunities to be seized. This is true in Africa as well as elsewhere. Consequently, national development and international policies are grappling with a highly vexing conundrum: an urgent focus on short-term crisis responses tends to be detached from the medium/long-term socioeconomic dimensions of development. This despite the fact that it is essential to define emergency policy solutions with long-term prospects, looking towards sustainable development. Otherwise, any solution we may find is doomed to fail.

The political challenge that international aid policy must face up to is that, very often, short-term and long-term issues are not aligned and they may look like alternative options.

Looking back on the past 60 years, it is obvious that ‘business-as-usual’ is no longer an option for aid policies. The agenda, everyone agrees, should represent a transformative tool for Africa.

International aid policy has had as its primary objective the reduction and, in the long term, the eradication of poverty. But, at the same time, the new 2030 agenda proposes an over-proliferation of sectoral objectives (the so-called Sustainable Development Goals) on social, economic, political and environmental dimensions, without emphasizing their intertwined nature and mutual linkages.

With specific reference to aid policies, the attempt to adopt a wider agenda, not strictly focused on the social dimension as in the past, combines with emergency pressures from the donor countries. The history of international aid can be described as a cumulative sum of different, often rival but never contradictory strategies funded internationally in order to create a favorable context to address various long- or short-term needs. This is confirmed by looking at the evolution of conditionality, a specific aid “instrument” designed to improve the impact of aid. International aid has been funding infrastructure projects, social expenditures (particularly basic health and education), training activities (with technical assistance), private sector development, good governance, and sustainable development projects.

In the meantime, the adoption of market-friendly macro-economic policy reforms (stabilization plans and structural adjustment programs) and the integration in the world economy of African countries as the best way to promote growth (the first generation of conditionalities) were supplemented by political reforms in terms of good governance, rule of law, consolidation of democracy and respect of human rights (the second generation).

In the new Millennium, the so-called Poverty Reduction Strategies introduced a direct poor-oriented conditionality focused on health, education, water and food security as a new framework to govern international aid. Then, after 9/11, the global war on terrorism as the core business of the new security agenda set up by the US-led coalition induced a biased set of international priorities, which have also affected the development cooperation agenda.

If one were to think that forced migration is a problem of the country of origin’s own making that must be resolved in that country, or a security or humanitarian problem in a specific host country, then that is just shortsighted selfishness. International solutions are needed, and political, security, humanitarian, development and diplomatic dimensions must all be addressed. Only a comprehensive response may represent a sustainable solution. And this implies significant investment.

Multiple instruments, approaches, and conditionalities  thus continue to suffer from insufficient coherence, because they can represent different visions and they are not simple components. They indeed reflect not only diverse moments in history, but also diverse visions and priorities.

Moreover, the rationale of international aid is that it should support national strategies, to guarantee ownership of development processes. Therefore, the balance between the (long- or short-term) priorities of donor countries and recipient ones should tend to favor the latter.

No continent for miracles

It is therefore important to consider the reality of African countries today.

With all due caution on data reliability and heterogeneity across countries, African economies depend heavily on foreign markets, with productive specialization certainly concentrated in just a few sectors – mainly raw materials and resource-based -, and the production process being capital-intensive and structurally unable to provide as many employment opportunities as required. This is not new; rather it is the long-term structural mode of integration of Africa into the world economy. In a context of high levels of economic inequality and structural unemployment, with the youth representing the vast majority of the population and the highest demographic growth in the world, future prospects are worrying.

Poverty is widespread in Africa, especially in rural areas. These are the most neglected by mainstream development strategies that do not recognize agriculture’s multiple functions for development and are focused on a non-inclusive model of agriculture based on the large-scale emerging commercial farming sector as the main partner in the global integrated value chains. This implies unsustainable pressures on vulnerable and fragile lands as well as on marginalized people. Worsening degradation of natural resources undermines the basis for the future and increases vulnerability to poverty, conflicts and migration.

In the last five years, sustained and rapid economic growth in many African economies has generated a debate led by the IMF on the persistence of a so-called “African growth miracle”. But if we look at the World Bank dataset on per capita income level and compare 1990 and 2014, there was no miracle. Twenty-five countries languished and still languish in poverty (that is, they were and still are low income economies); one country (Zimbabwe) has fallen into poverty; seven countries have been lifted from poverty but still live around the poverty line; three Western African countries are now above the poverty line; eight countries have been lifted out of poverty and are now in the upper-middle income brackets; eight countries have always been middle-income countries; and there is just one country that moved from the middle-income to the high-income group (Seychelles). 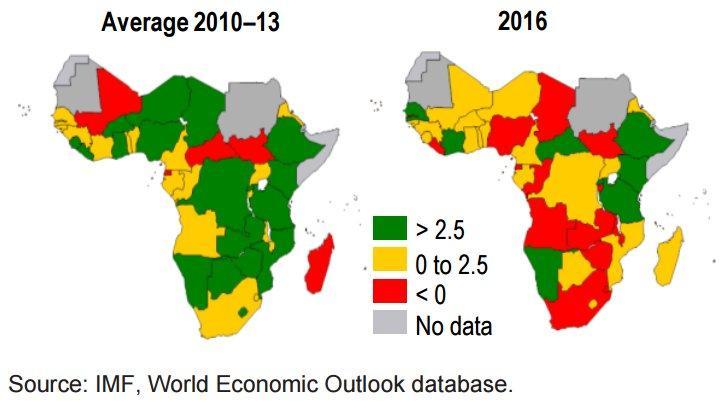 In terms of population, half a billion inhabitants – half the population of Africa – are living in just five countries: two languishing in poverty (Democratic Republic of Congo and Ethiopia), two that have been lifted out of poverty (Egypt and Nigeria), and one that has always been middle-income (South Africa).

If we look at the twelve countries with an average growth rate above 3% in the 2011-14 period, the underlying structure is not new. Valuable natural resources – oil, minerals and commodities – provide the bulk of wealth, without distribution and employment. Informal economy and under-employment still prevail.

We now have a broad consensus on going beyond GDP these days. But GDP is just the result of the mode of production. The key technical mechanism of such a mode of production is productivity. If the idea of sustainable development is not just lip service, then a new paradigm for development is needed. Managing the interlinkages among rural and urban areas, natural resource conservation and the environment must be an integral part of a transformative agenda. According to economist Alain de Janvry, until now land expansion has been the main source of growth in cereal production in Africa, contrary to other developing regions where rising yields have been the main source. Land expansion is not a long-term sustainable strategy, and land scarcity is already on the rise.

Despite the mentioned consensus on the need to go beyond GDP, it is very impressive that productivity increase is at the core of the international and African development agenda, with nobody questioning it. Economist Paul Krugman once wrote that “productivity isn’t everything, but in the long run it is almost everything”[1].

If we recognize that economic growth is instrumental in character and welcome only if social, environmental and economic objectives are harmonized and made favorable for the most vulnerable groups in order to become politically transformative, then it is difficult to continue arguing in favor of the relevance of productivity per se as a measure of economic progress. This is particularly true in Africa.

If decent employment for all is considered a key goal (is it really feasible and sustainable in the long run? What about the “gig economy” on a global scale?) and biodiversity conservation another unquestionable goal, we should recognize that increased value of labor productivity may be translated into fewer hours worked (more unemployment to get the same output value) and not necessarily into increased wages for workers. And the same thing happens to an increase of cultivated land: each worker produces more outputs as each one has more land to cultivate and the value of the marginal product of labor rises at any given level of employment. Here we should also consider the issue of environmental degradation and resource depletion as a concrete trade-off between more quantity of output and worse quality of environment.

But a dethronization of productivity in the name of conceptualizing (and, much more difficult, measuring) a new sustainable productivity destroys the overarching paradigm for mainstream growth at global level, not only in Africa. This means rethinking economies so as to reflect new societies and territories, as well as the challenges and opportunities represented by new technologies and automation. It is also a way to reconsider the trade-off between labor, capital and natural resources, to determine if and how economic growth is embedded into development, without the simple shortcut of de-growth.

However, when you think about it, if there is no war at home, it is much easier for development policies and international aid to be led by emergencies, looking at short-term reactions and at ways to  reduce migration flows as a goal in itself.

Regional terrorism in West Africa and the Sahel connections