I think that answer must now be clear to even the dimmest of analysts. The global health crisis the coronavirus represents—along with its huge economic, geopolitical, and political ramifications—towers above any other single-issue event that has happened over the past 20 years, both in its obvious global scope, as well as the shock that closing huge components of the world’s economy represents. This is the equivalent of our generation’s global war. It is the big one.

China, Europe and North America have presently shut down much of their industrial capacity for months, with China just beginning to emerge after a quarter of severe economic restriction. We will be lucky if globally things are up and running economically by the autumn of this year. The quarterly downturn numbers are set to be drastic, with falls not seen since the Great Depression. For all these reasons we assess that the answer to the first platonic question is yes, with 95% assurance.

If this is so, the second, vital policy question for the West is: Can policymakers contain the immediate damage so the economic outcomes are on the level of the Great Recession of 2008, rather than that of a great Depression? Can a V-shaped recovery be engineered? In our view, this can only be done (as it was in 2008) with G20 coordination, of which so far there is no sign. While, given the large number of players, policy coordination at this level is heroically difficult, it is only at the global level that the multiplier effect of countries’ very different rescue efforts can work together. Policy coordination is vital, and hideously difficult.

Third, as was true with the last great global pandemic, the Spanish flu of 1918-1920, the coronavirus is likely to serve as an accelerant of trends that are already present. In the case of the present pandemic, the coronavirus amounts to the next chapter in the already established worldwide shift toward the delinkage of globalisation itself. While the Trump administration already initiated this process with its series of trade wars – particularly with a rising China – it is the pandemic which decisively moves delinkage ahead.

While free trade will (and must) continue, it will not be as ‘free’ as before; more and more trade will be regional and national in orientation, as global supply chains dissolve in the face of tariffs and health panics. This will have the profoundest implications for the world. We estimate that there is a major chance this delinkage continues apace following the crisis.

Fourth, this once-in-a-generation political risk event upends the basic global geopolitical narrative. We are confident in this bold assertion at a 70% rate. Think of the great powers (the US, China, and the EU) as players at the poker table. The game has a clearly defined set of rules and patterns and who is winning (China, above all, recently) and who is losing (the EU, relatively) has not radically changed for quite a while.

All the powers have basic strengths and weaknesses made clear by the crisis. China, where the virus originated and initially by far the hardest-hit power, is coming out of the crisis ahead of the rest; in fact, the West itself—and especially the US—is just reaching the peak of the pandemic.

China comes out of things in better shape than most, having taken the hit and—using state control to marshal its disciplined public—managed to best this first wave of the pandemic. After horrendous economic losses, Beijing can now at least look forward to being able to get back to normal while the others struggle with the darkness of the plague. On the other hand, in the longer term, a delinkage of globalisation hurts China—by far the world’s greatest exporting power—more than anyone else.

The US’s rickety health care system has resulted in there being scandalously little overall testing for the virus–an avoidable lapse that will lead to more deaths than are necessary. In any case, following the pandemic, the US could well lose further geopolitical market share to the others.

Finally, there is the EU. As we have predicted over and over, the continent-wide governance of Europe is presently not fit for purpose in our new era. The EU is an edifice made for sunshine, not for rain. The minute there is a real crisis, all talk of ‘solidarity’ goes out the window. Nor were sufficient EU-wide monetary policies put in place quickly to brace the virus-infested French, Spanish, and Italian, though as ever the ECB got there in the end, if too slowly. 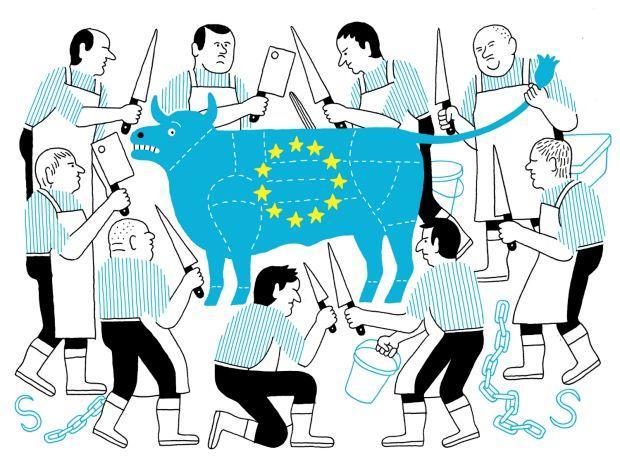 For Europe, the crisis as opportunity

But crises can also amount to opportunities. Yet while the coronavirus has painfully illustrated Europe’s present political impotence, paradoxically a series of seemingly unrelated events allow me to be cautiously bullish about the place for the first time in my adult life. Europe is a geopolitical buy on the down-side.

For a long while, Europe has been a relatively dwindling force, economically sclerotic, politically divided and strategically (with the exception of France) an afterthought in terms of having full spectrum militaries, who can do everything from warfighting to peacekeeping. All of these power realties contrast with the two emerging superpowers of the era, the US and China. But this fixed narrative is now at last open to change.

First, Germany will emerge from the coronavirus crisis weakened, which in European terms is a very good thing. As Henry Kissinger astutely noted, the historical tragedy for Berlin is structural: Germany is too powerful to be just one of a series of great European powers (like France, Spain, and Italy) just as it is too weak to wholly dominate the continent. This unsolvable geostrategic conundrum lies at the heart of both the world wars, as well as European impotence over the past generation.

But given the ongoing de-linkage of globalisation—initiated by Trump’s trade wars but undoubtedly to be furthered by the coronavirus crisis—Germany, as one of the world’s premier exporters, stands to lose market share in terms of power over the long term. While it will remain the most important single country in Europe, it will tower less over its fellow European great powers. Given the calamitous do-nothingism of the long-serving Merkel government, this internal power change makes genuine European reform far more of a possibility.

Second, the frugal Germans–at last aware of the danger to themselves–have decided to open the spending spigots to the tune of 500 billion euros to combat the virus. Berlin has pledged to do whatever it takes to safeguard its economy; it can now hardly fault other European countries from doing the same. This removes a major obstacle to EU-wide reform.

Third, and further afield, the suffocating embrace of the US is bound to lessen following the pandemic. The US, while undoubtedly possessing both the most advanced and most dynamic economy in the world, also has a terrible political leadership (the congenitally erratic Trump is just the most obvious example) that has been dreadfully slow to react to the coronavirus. Its preoccupation with its own problems will give Europe strategic room to manoeuvre, while keeping the US onside as an ally.

Fourth, Merkel’s particularly ruinous reign—during which Germany has perpetually blocked any real efforts of enacting EU-wide reform, such as French President Emmanuel Macron has been proposing–may at last be coming to an end.

A Macron-style deal in general would see Germany provide an economic backstop (largely on its terms) the EU, leaving it with a real treasury ministry, real fiscal policy, and coronavirus euro-bonds commonly held from here on out (though debt up to now would be state-to-state). In essence, Macron wants a confederation at a minimum and a federation at a maximum. Germany might over time just agree to the former.

As such, the ramifications of an obscure election in the German state of Thuringia (October 2019) cannot be overstated. It saw Merkel’s chosen heir, Annegret Kramp-Karrenbauer (know universally as AKK), lose control of the local Thuringian CDU party, of which she was the national head. Merkel was forced to condemn both the local Thuringian CDU party for casting in its lot with the far-right AfD, as well as her ineffectual acolyte AKK for not preventing the mess in the first place. This scolding proved to be the final nail in AKK’s coffin. She dramatically resigned the national leadership of the party, and with it, scuppered Merkel’s plans for a stable succession.

The favourite to emerge as the new head of the party and Chancellor-candidate (and long-time Merkel nemesis) Friedrich Merz is a man cut from an entirely different cloth. Long the standard-bearer of the right wing of the CDU, the confident, market-friendly Merz would amount to a repudiation of Merkellism. Not only would Merz tack the party back to its rightwards home (hopefully hoovering up AfD voters, much as Boris Johnson amalgamated Nigel Farage’s support), but he would be open to a hard-headed deal over Europe with Macron.

At long last, then, there is a glimmer (and that’s all it is) of hope for Macron’s ambitious and necessary European reform agenda. It is true that, before the Elysee pops the champagne corks, a number of caveats are necessary. In moving to the right, Merz would have to be mindful of betraying the concerns of some of his new eurosceptic constituents.

Even more importantly, German governments are habitually coalitions. Who the CDU enters into coalition with will largely determine its European policy. A deal with the surging centre-left Greens is the best-case scenario, but there are a bewildering array of other possible coalition outcomes, almost all of which lead to further deadlocks over European reform. However, even with these necessary caveats, one thing is surely clear: the long-slumbering German giant is at last awakening. And that is good news for the European project as a whole.

Can compromise produce a Europe that works?

So there is a real chance for European reform, if the major players can but compromise. A Germany (and its Hanseatic League allies such as the Scandinavian countries and the Netherlands) that grudgingly allows more continent-wide spending and even a common coronavirus bond (at today’s subterranean interest rates), but largely on its own exacting terms; a France that settles for less than an EU super-state but does manage to move Europe toward at least confederation; and an Italy that gets to spend more but only on specifically targeted areas to stimulate future structural growth, is at last possible.

It will take vison to achieve Europe’s dramatic turnaround, but at least—following the carnage of the coronavirus—the pieces to do so are on the table. We give this newly revived reform hope a likelihood of less than 50%, but frankly it is all we have.

Dr. John C. Hulsman has been for the past fifteen years the President and Managing Partner of John C. Hulsman Enterprises, a prominent global political risk consulting firm. Literally, the sun never sets on John’s political risk analysis: He is Senior Columnist for City AM, the newspaper of the city of London, while also writing regular columns on geopolitics, macroeconomics, and politics for outlets in Riyadh, Washington, Rome, and New Delhi. His most recent work, the best-selling, "To Dare More Boldly: The Audacious Story of Political Risk", was published by Princeton University Press in April 2018. To keep up with John’s other work please go to: johnhulsman.substack.com

How a virus is raising questions about cyberspace, non-conventional threats and hybrid warfare