On December 22, US President-elect Donald Trump tweeted that the United States should “greatly strengthen and expand its nuclear capability until such time as the world comes to its senses regarding nukes.” This was likely in response to a speech by Russian President Vladimir Putin calling for an expansion of Russia’s own nuclear capabilities. Indeed, its nuclear modernization over the past decade has already prompted suspicions of an arms race.

The day after the nuclear tweet, in a conversation with Mika Brzezinski of Morning Joe, Trump offered further explanation: “Let it be an arms race. We will outmatch them at every pass.” These two comments have raised concerns that nuclear adventurism will be manifest in Trump’s policies once he becomes President. 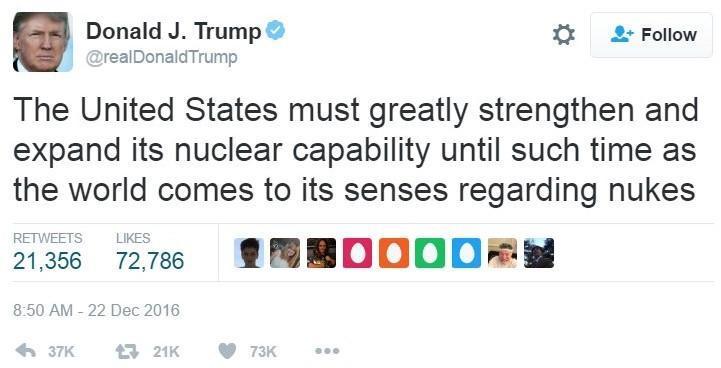 Such statements should be kept in context, however, as both Trump and Putin are speaking to domestic audiences rather than solely to each other. Putin is in a paradox in his need to portray a strong Russia, the foundation of which is its nuclear weapons, along with attempting to improve relations with the United States. Trump’s election victory over Democrat Hillary Clinton was positively received by the Russian public according to a poll by the Public Opinion Foundation, which found 67% of Russians expected relations to improve under Trump and to be accompanied by a lifting of sanctions. For his part, although Trump may express a desire to improve relations with Russia, he is also under pressure from Republicans and some of his advisors to take a stronger stance towards Moscow, particularly with regard to nuclear bullying on the part of the Kremlin and perceived threats to NATO members in Eastern Europe. Additionally, concerns regarding Moscow’s alleged interference in the November vote remain unresolved and a source of bipartisan dispute in Washington.

Friendship with Russia was always an outlier in Trump’s otherwise populist platform. Taking this into account, what are the risks of Trump’s nuclear tweets? Is the current uproar an overblown Twitter storm in a teacup, or the start of an arms race, or possibly even nuclear blackmail and aggression – a genuine threat?

Trump’s pre-inaugural tweets suggest at least four nuclear-related risks if they are reflected in his policies. First, nuclear signalling is a delicate art with wide scope for miscommunication. Trump’s commentary, with seemingly random and pithy statements, is ill-suited for nuclear messaging and could increase risks of miscommunication, particularly in a crisis. Second, Trump’s suggestion of a nuclear arms race could contribute to a more pervasive deterioration in US-Russia relations, despite his personal affinity for Putin. The United States political elite has rarely proven itself adept at understanding Russia, and Trump would only exacerbate this misperception with potential political and strategic instability as a result.

But dangers would not be limited to US-Russia relations. A third risk of a new nuclear arms race is the financial cost. For example, in the 1980’s despite nuclear negotiations and eventual reciprocal reductions with Russia, America’s spending on nuclear weapons increased 39% under Ronald Reagan, costing an estimated $39.5 billion. Lastly, a broader international risk is how Trump’s nuclear policies may impact the global nuclear order, particularly the Nuclear Non-Proliferation Treaty (NPT), signed in 1968, indefinitely extended in 1995, and reviewed ever five years.

The most recent NPT Review Conference in 2015 was considered unsuccessful in that it failed to result in a consensus document. The NPT is at a particularly fragile point with growing polarization between the nuclear possessors and non-nuclear weapon states due to lack of progress towards nuclear disarmament. Some of the latter group – led by Mexico, Ireland, Austria, and South Africa- have recently taken their frustration to the United Nations General Assembly, and last October 123 states voted to start negotiations on a nuclear weapons ban treaty in March 2017. A new nuclear arms race and increased US reliance on nuclear weapons would further exacerbate this growing distrust and could potentially undermine the NPT as a cornerstone of the global nuclear order.

However, a more balanced approach requires also considering the potential benefits of Donald Trump’s aggressive nuclear approach, as tweeted. First, it could be perceived by US allies as a sign of commitment to standing up to Russian bullying and reassuring them of America’s commitment to European security. Unfortunately, while some allies might indeed be reassured by this, others will be concerned by the increased risks of rising US-Russia tensions. Assurance requires more delicacy and tailoring than Trump’s statements, in the form of tweets, permit. Also, it should be recalled that these statements come in tandem with Trump’s campaign statements potentially undermining the credibility of the US commitment to NATO, in the form of harsh criticism of the allies’ inadequate defence efforts.

Despite these uncertainties, another potentially positive impact is that Trump’s emphasis on nuclear weapons development may prove to be a bargaining chip in future arms control negotiations. To be sure, Russia still needs arms control for economic, political, and prestige reasons. If and when Putin pursues a return to the bargaining table, Trump’s nuclear investments may facilitate more ambitious negotiations and tit-for-tat reductions. But this, too, comes with downsides. Russia’s position is that further arms control is only possible if it includes limits on US missile defenses and includes conventional weapons. A nuclear arms race would not change this position. In addition, it is both politically and morally questionable to build up an arsenal for the sake of negotiating it away later on– itself a gamble.

A final potential benefit, and perhaps the most promising, would be increased investment in the US nuclear infrastructure. Obama made strides in this direction, and sustained investment could contribute to resolving issues raised by a series of reports finding “systemic problems across the nuclear enterprise” due to lack of investment in personnel, security, and even basic equipment, such a wrenches. Alas, this, too, requires a word of caution. Trump’s nuclear investment strategy could come with a return to nuclear testing, which would have disastrous consequences on the norm against testing, the environment, and the global international order and progress towards nuclear disarmament.

If this were part of a sensible strategy to check Russia’s ambitions to expand its sphere of influence and reassure US allies, Trump’s tweets could indeed prove to be beneficial. Alas, that is not the case. Instead, Trump’s tweets appear to be what Bob Cesca from Salon called “whimsy.” When Secretary of State Hillary Clinton presented her Russian counterpart, Sergei Lavrov, with a “reset” button in 2009, it was mistranslated to read “overcharged.” The error in translation proved appropriate, as US-Russia relations deteriorated under the pressure of Russian aggression and post-Cold War legacies.

Given the current state of US-Russia relations, concern about Trump’s tweets are not overblown – rather, such nuclear whimsy may prove to add further pressure to an already unstable and risky relationship.

Heather Williams is a Lecturer in Defence Studies at King's College London, where her research focuses on arms control, nuclear modernization, and US-Russia relations. Until 2015 she was a Research Fellow at Chatham House, and in 2014 completed her PhD in the Department of War Studies at King's College London. Dr. Williams previously worked for the Institute for Defense Analyses and the U.S. Department of Defense.