The dust of the electoral campaign has just settled and it is already clear that the last round of Israeli elections marked a breakthrough from the Oslo-led paradigm through which public opinion was used to analyze the Israeli-Palestinian conflict over the last 26 years.

Pundits claim that, when push comes to shove, Israeli elections obey three main tenets. First, they are always dominated by the two main issues of defense and security. Second, the right is credited as the only trustworthy political force security-wise, ideologically committed to the fulfilment of Zionism and to the defense of the state by any means. And, third, there is no partner for a peace deal within the Palestinian camp, since 2006 it is split into two rival factions that struggle with each other rather than negotiate with any Israeli government.

However, the last election round disproved all three deep-seated beliefs: security and defense issues drew little public attention throughout the electoral campaign, as no party focused on the Iranian nuclear deal or the Iranian military bases in Syria. There was also no focus on the Hezbollah menace on the northern border or Islamist rebel pockets just across the Golan Heights. The only security issue raised during the electoral race was the recent government response to the missiles launched from the Gaza Strip on central Israel: a response judged as too mild by a great majority of Israelis, that nonetheless has not dented the leadership of Netanyahu.

Rather, public support is elicited by Netanyahu’s achievements in the diplomatic arena, as much as by the good economic performance of the country. Competition rages on the right to the Likud, as there were at least seven other prominent competing right-wing parties splitting its electoral constituency. The Likud is no longer being endorsed as the single bulwark against a peacenik left, but regarded as a moderate force preventing the budding of more radical parties at its further right. Finally, the traditional “no Palestinian peace-partner” refrain was dropped altogether, with the Palestinian issue losing any interest for the majority of the 6,339,729 voters allowed to cast their ballots (with a 68.4% voter turnout).

Paradoxically, the foretold indictment of PM Netanyahu made headlines much more than his claim to be willing to annex area C of the West Bank if re-elected. The probable indictment did not succeed in shifting support away from the incumbent Prime Minister, rather it resulted in the opposite: closing ranks around him, and him being identified as a victim of the liberal and thus discredited judiciary system.

The West Bank annexation’s announcement, made just two days before the elections but already featuring in the Likud party’s platform since November 2018, was also a key factor in the prime minister’s victory: Not only did it rally all right-wing supporters behind his leadership, but it also emptied content and appeal from much of the extreme right parties’ agendas (the New Right of Bennet and Shaked, and Zehut, both of which failed to pass the threshold), thus cannibalizing minor right-wing parties.

Not much to anyone’s surprise, the Palestinians were totally cut out of the last election round, including the Israeli-Arabs, who still count for some 20% of the population, though traditionally for far less of the voters (around 10%) due to lower turnouts (this time, around 44%). As Palestinian analyst Amjad Iraqi cynically observed: “Israeli officials are more likely to face justice for receiving expensive cigars than they are for being about to commit the crime of apartheid” (al-Shabaka, March 11, 2019).

Israeli-Arabs have further hurt their cause by splitting the 2015 Arab Joint List into two rival factions (Hadash and Ta’al vs. Balad and UAL) competing for an already majority-disenchanted Arab constituency, with the second unable to pass the threshold. Israeli Palestinians do not cast any hope either in a Blue&White or in a Likud-led government, as both parties have made it clear that no Arab party would ever sit in the government coalition. In sum, the Arab choice revolved only around whether to boycott or take part in the elections, either understanding them as a political test of national steadfastness (sumud) or as a political opportunity to pressure any future government from outside. The Arab vote’s only credit is to have saved the left-Zionist party Meretz from disappearance, pushing it over the threshold, as the party chair leader Tamar Zandberg publicly acknowledged.

The Palestinians of the occupied territories find themselves in an even worse spot. The Palestinian Authority’s new Prime Minister, Mohammed Ishtayeh, has declared that “Palestinians remain eager to discuss peace with any Israeli government”, but will not accept any unilateral annexation move as aired by the incumbent Prime Minister just before the elections. Unfortunately, they have no strategy to put forward in order to prevent such annexation in case a good majority within the new Israeli government would argue in its favor.

They cannot rely on the EU’s goodwill declarations or trust that the updated EU Association Agreements will include a clause differentiating between Israel and the occupied territories. They also cannot expect European member states’ bilateral relations with Israel to be harsher than those of EU collectively – as the Visegrad countries’ policies already show -, nor can they foresee the new European Commission coming out of the May European Parliament elections pressuring for a renew International Criminal Court examination of the 2014 Gaza War, or any other forthcoming war.

As for the US brokerage, the Trump Administration has no qualms about being a sturdy pro-Israel supporter and no trouble accepting changes of the status quo favoring Jerusalem, as the Golan Heights annexation official recognition by President Trump proves. Rumors circulating around the content of the “Deal of the Century” point in the direction of a Trump proposal to get the Gaza Strip economically back on its feet through a sound Egyptian-Israeli joint commitment to rebuild and invest in Gaza, stripping the issue of Palestinian national reconciliation off the table. This move would mean the definite separation of the West Bank and Gaza Strip in two independent territorial entities and could eventually meet the support of the new Likud-led government pretending to have been pressured by its main military ally, the USA, to vicariously compromise with Hamas. In any case, it is easy to predict that the Hamas-Fatah rift will continue unabated beyond the US peace deal’s disclosure and that the international community will grant full impunity to virtually any Israeli policy. 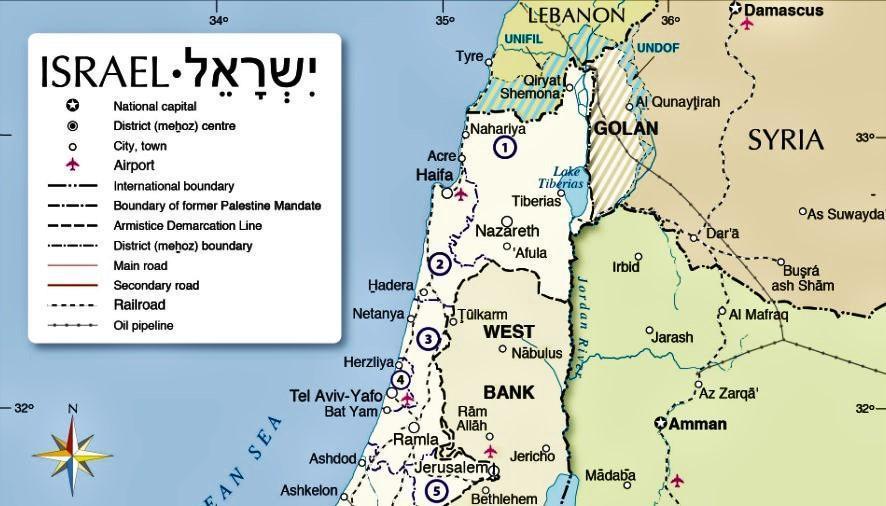 Israeli commentators all agree on the fact that the elections revolved around the persona of the Prime Minister and the question of how to challenge his leadership and avoid a fifth mandate: about a third of the Israeli public opinion opposes Netanyahu due to his indictment linked to numerous breaches of the rule-of-law, rather than because of his policies.

Notwithstanding the registration of more than 40 parties on the electoral rolls, organized political opposition in the country is disbanded. The main and unique competitor to the Likud has not been a party, but a botched nationalist coalition that some voters would have liked to place at the center-left and some others at the center-right (depending on the personal viewpoint). It convened in haste with the only objective of snatching votes from the staunch right-wing bloc solidly backing the Likud. It ranked three high-profile former Israeli Defense Force chiefs of staff (Benny Gantz, the chairman, Moshe Ya’alon and Gabi Ashkenazi) together with the leader of a former centrist party (Yair Lapid of “There is a Future”), but, notwithstanding the display of popular figures, the attempt to chip away right-wingers’ support failed, as the Blue&White Party seemed to have gained more out of Labour’s support than of Likud’s.

In addition, it is questionable whether a heterogeneous party such as the Blue&White would be able to stick together as the main opposition bloc. The latter did not come up with a detailed political program but limited itself to few guidelines: no unilateral annexation of the West Bank, openness to the forthcoming US Peace Plan, firmness against any Hamas provocation on the border, a generic call for national unity extended to all the five Jewish tribes (the Ashkenazi, the Mizrahi, the Russian, the Ethiopian and the Haredi Jews) by an appeal to promote “a clear governance”, fight against corruption and rule-of-law abidance – paying homage to those democratic institutions, such as the Supreme Court, whose authority is increasingly disputed by some right-wing parties, including the Likud. Joining the opposition, the party would have to advance bills on specific policies deeply alternative to those of the Likud, an effort stretching far beyond the easy declarative commitment to oust Netanyahu that pushed it together in the first place.

Either way, the 2019 Israeli elections did not focus on any great political challenge lying ahead as the two main parties agreed on basic red lines: no division of Jerusalem; no evacuation from the biggest settlements (Ariel, Ma’aleh Adumin) – which means no return to the 1967 borders, rather a re-enacted version of the “Allon” security plan (meaning keeping Israeli military facilities in the West Bank to ensure strategic depth); no government alliance with the Arab-Israeli parties; no backtrack on any of the political “achievements” reached by Netanyahu (including official recognition of the Golan Heights, welcomed by a majority consensus); unconditional military and diplomatic efforts to counter the Iranian threat.

Yet a Blue&White-led government would have heralded good news for the international community. It would have meant that Israel would have gone “back to normal”: a civilian, rule-of-law abiding country, not shielding Netanyahu from his indictment, able to negotiate with any US administration, willing to restore good ties with Diaspora Jews, reining in ultra-Orthodox groups and settler extremists within its borders, keeping existing security-subcontracting relations with the Palestinian Authority, opening the doors to boosted scientific cooperation with the European Union. In sum, a “reasonable partner”.

No Israeli government will be able to swear in tomorrow, however: ddespite declarations to be already holding the keys to a coalition, it could take Netanyahu up 60 days to come to terms with minority partners to set up the coveted 61-majority government. The Likud needs to take on board all the three surviving minor right-wing parties (Union of right-wing parties, Kulanu and Israel Beitenu) plus the two religious haredi parties (United Torah Judaism and Shas) to reach it, securing 65 seats.

The little party Kulanu has already pledged to merge with Likud in the short term, but a prospective government coalition including the secular Yisrael Beitenu and the haredi parties could potentially spark off serious intra-government clashes, particularly on the lingering haredi military conscription law. A sensitive issue that would allow the Blue&White party, if the opposition stands, to pressure the government coalition from the outside, eventually replacing it, should Netanyahu’s coalition split on any ground, including his thrice corruption charges.

On the eve of his fifth mandate, “King Bibi” – as he is traditionally called by his supporters – is stronger than before. Gantz’s descent into the electoral struggle did not achieve its main goal of undermining the unchallenged leadership of a single man in power for over seventeen years (through his tenures as foreign and finance minister and the premiership) in a Arab ra’is-style scenario.

It will be hardly a surprise if an emboldened Netanyahu would now attain what he has not dared to accomplish so far: putting a final end to the idol of a Palestinian state by reaching a long-term truce with Hamas, achieving diplomatic normalization with key Arab States (Saudi Arabia, Oman, Jordan and Egypt) while annexing the West Bank on the basis of Israel’s justified claim to a territory conquered through a self-defense war unwillingly enforced on Israel. The Golan Heights set a precedent and even though the “Great Israel” self-condoning narrative was already in place, what was missing was the political mettle to make it real: an accomplishment of the last election round.

Claudia De Martino is a researcher at UNIMED in Rome, and received her PhD in Social History of the Mediterranean at the Ca’ Foscari University of Venice.

Britain’s new relationship with the EU: politics of resentment