Maduro’s re-election and the US reaction

Venezuela’s election on May 20th drew world attention, not simply to what is happening in the country, but also to how the US will respond to events in Venezuela. The country is suffering a disastrous economic collapse, and a political crisis that is generating purges within the government of Nicolás Maduro and violent repression of the opposition. The US response to the election – with the confirmation of the incumbent – is influenced by the context within which the elections were carried out, the US perception of chavismo ideology, specific action by the Maduro government and the place of Venezuela in US foreign policy.

This election lacked legitimacy in the eyes of not only the United States, but also Canada, the European Union, and more than a dozen Latin American countries. The problems included not permitting strong opposition candidates to run, barring major opposition parties’ participation, moving the date for the election forward to limit the opposition’s ability to select a candidate and develop a campaign, and the fact that the electoral commission was controlled by the government. Suspicions were further heightened by recent history: in the July 2017 vote on a constituent assembly to write a new constitution, the government had announced total votes exceeding by at least a million what the company responsible for supplying voting machines and software reported. 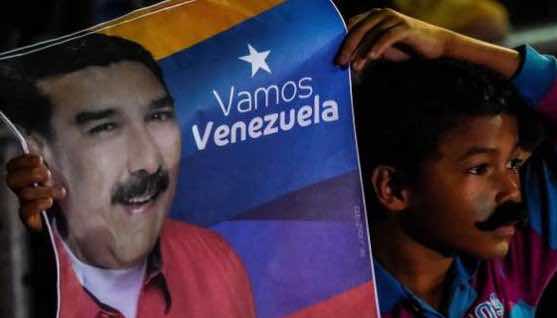 The elections thankfully occurred without violence. Maduro and the Electoral Commission claim he won with 68% of the vote and a turnout that, while low, was still reported at 46% (the 2013 presidential election, which the opposition candidate nearly won, had a turnout approaching 80%). The government extended the voting hours and stationed “information” booths outside the polling stations where voters were asked to scan their identification cards which provide them access to government-approved rations. Both opposition candidates have denounced irregularities and various international news sources published photographs showing empty polling stations, further calling into question the reported turnout.

Canada, the EU and Latin American countries both within and outside the Lima Group refused to recognize the results of the election, though a handful of Maduro’s allies in Latin America and Russia congratulated Maduro. China asked that Venezuela be allowed to decide how to resolve its crisis, but stopped short of immediately congratulating the winner, as they had in prior elections.

Chavismo and the Maduro regime

Since Hugo Chavez won a democratic election in 1998 and instituted “socialism of the 21st century”, US administrations have been suspicious of the Bolivarian revolution and in 2003, hostile enough to support non-democratic regime change. The diplomatic fiasco of the failed coup convinced the US that regime change needed to follow a democratic script.

Any US president would find chavismo ideology problematic. Though it is not clear what “socialism of the 21st century” means, at the very least it means a government that is not bound by the rule of law, even the laws it makes itself. It also explicitly identifies the US government as the enemy of the people, not just in Venezuela, but globally. And finally, its support was based on the hyper-mobilization of a polarized polity supporting the increased concentration of power in the Executive.

Many of the policies of chavismo, while not preferred by the US, could have been accepted by the United States in the absence of the above issues. US governments accept the sovereign right of countries to raise taxes on corporations and even to demand contract renegotiation, but confiscation of property without just compensation is not acceptable. For example, the US accepted Brazil’s increased resource taxes and its change in the law governing access to pre-salt hydrocarbon resources, but the law was not retroactive, nor did it permit confiscating existing properties.

Chavismo encountered serious problems with the collapse of the oil market, but Nicolás Maduro’s incompetence in the face of the ensuing economic downturn turned it into a full blown economic crisis. That crisis strengthened the opposition to such an extent that Maduro resorted to violent repression, the jailing of opposition leaders, closing the National Assembly when the opposition won a super majority, and confiscating even more private properties. The extent of Maduro’s political follies came when he began purging the chavista movement and deciding to write a new constitution to replace Chavez’s constitution of 1999. Maduro’s closing down of the democratic spaces has made him a lightning rod for US opposition to chavismo.

The US wants to be a leader in influencing the transition in Venezuela, but it does not want to itself become a focus of the crisis. Therefore it prefers to follow the Lima group, while pushing it from behind the scenes. However, Latin American countries do not have as many legislative tools or commercial and financial interactions with which to sanction Venezuela as the US does. Thus US attempts to disguise its role are largely unsuccessful as it imposes sanctions without significant cover from its Latin American allies.

Prior to the election, the Obama and Trump administrations had already imposed sanctions on Venezuela. Some of those sanctions focused on members of the Maduro government, thereby trying to mitigate their impact on the Venezuela people; other sanctions were aimed at restricting Venezuela’s ability to make its foreign debt payments. Of course, in the context of the economic crisis, those sanctions would nonetheless have an indirect impact on the Venezuelan people. The Trump administration has also appealed indirectly to the Venezuelan military to overthrow the Maduro government in the naïve belief that this would be considered a purely Venezuelan decision.

Though these steps represent a ratcheting up of pressure, the US has still not declared an embargo or suspended oil purchases from Venezuela. Either of these steps would likely be perceived as a unilateral aggression by the US against Venezuela. By sticking with increasingly rigorous financial sanctions, the US is able to retain the support of the EU, Canada and the Lima Group. Whether external pressure can truly alter the politics of this Latin American country remains to be seen.

David Mares is Distinguished Professor at the University of California, San Diego, where he also holds the Institute of the Americas Endowed Chair for Inter-American Affairs. He is also Non-Resident Scholar for Latin American Energy Studies at the James A. Baker III Institute for Public Policy and a member of the Council on Foreign Relations and the International Institute for Strategic Studies.