US trade representative (USTR) Robert Lighthizer and EU Commissioner for Trade Cecilia Malmström are meeting this week in Brussels for the second time to advance talks on a potential trade deal. Based on the past 18 months of an evolving Trump trade policy, what can Europe expect from this dialogue?

Despite the often intemperate and erratic rhetoric of the US president, it is important to note that neither Trump nor his senior trade advisors, including the most consistent hardliner Peter Navarro, have ever ruled out some sort of a trade deal with Europe. The Trump-Juncker understanding reached in July reflects not only this openness, but a growing recognition in the United States, including at the White House, that the most important goal of US trade policy is meeting the challenge of Chinese mercantilism. Already, starting in December of 2017, US, EU and Japanese trade ministersopened a dialogue to craft a unified approach to China’s systematic flouting of its World Trade Organization (WTO) obligations and to develop new disciplines to cover the behavior of Chinese state-owned enterprises (SOEs) and its opaque and frequently illicit tactics to acquire Western technology. This trilateral dialogue is a good starting point for more constructive transatlantic cooperation.

The trilateral process will necessarily include serious reform of the rules of the WTO, which Lighthizer has long called for. A July 5, 2018 European Commission white paper on WTO modernization is a good contribution to the discussion and could also help set a positive tone for the larger scope of US-EU trade talks.

Advancing beyond a positive tone at the start will require substantial work on both sides of the Atlantic. What the US side will emphasize is gradually emerging from US negotiations with Mexico and Canada, Korea, Japan and even with China. These talks reveal core concerns. USTR Lighthizer is clearly the most trusted of the President’s trade team. He has long championed not only WTO reform and taking on the threat of China, but has shared the President’s focus on reviving the US manufacturing sector. Actions on steel, aluminum, autos (and likely uranium in the near future) are the leading edge of this policy. The new rules of origin agreed with Mexico on automobile and parts trade embody the policy, going so far as to require that 40-45% of content be produced with labor rates of at least $16 per hour, far above normal factory wages in Mexico. The policy mix extends to finding means to incentivize or favor production in the United States. Lower corporate taxes and the switch to a territorial tax regime are part of this strategy, as is the use of the “bully pulpit” by Trump to convince Foxconn to build a new multibillion facility in Trump territory in the Midwest. Lighthizer’s push for severe limits on the use of the investor state dispute settlement (ISDS) system in the Mexican agreement is relevant as the USTR believes such a tool is largely an insurance policy for US firms to invest abroad.

The revival of quotas (used selectively in the 1980s by the Reagan administration for countering growing Japanese penetration of US industrial markets) on steel, aluminum and, apparently, on autos from Mexico is yet another tool to incentivize domestic production.

The Trump team has of course breathed new life into Section 232 of the 1962 Trade Act that employs national security concerns to justify tariffs and quotas. Closely related to this tool is the increased use of the power to limit foreign direct investments on national security grounds, especially for the acquisition of sensitive technology by the Chinese. Some of these actions, such as blocking Chinese purchase of telecommunications technology or sale of Chinese technology in this sector by state-connected firms, or the potential limits on uranium imports, are certainly legitimate. However, there is little reason to argue that steel, and even more so autos, meet the requirements of national security protection. 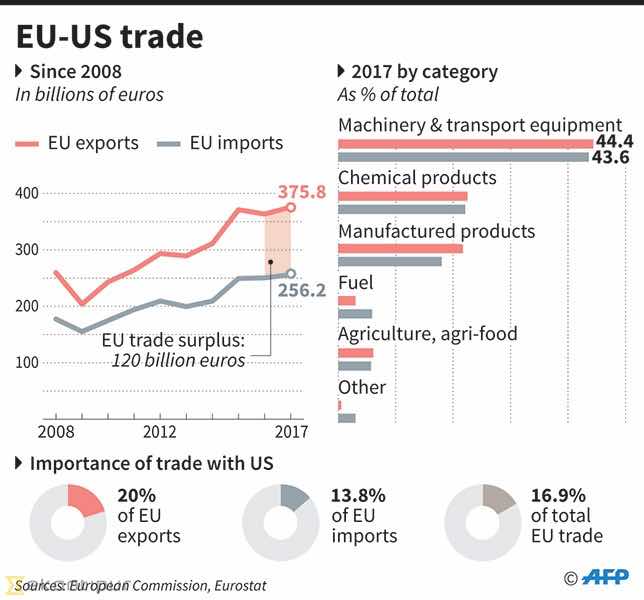 I believe that Congress will take back some of its authority granted by the US Constitution over foreign commerce by limiting the use of Section 232 if Trump applies it to the auto sector. The industry is firmly opposed to such a move and has broad, bipartisan support in Congress. If the Democratic Party takes control of the US House of Representatives in November, it would increase the likelihood of changes to Section 232. Although USTR Lighthizer will oppose any discuss of this topic in the dialogue with the EU, at some point it would be useful to see if there might be common ground on the use of national security as a trade tool, including on the subject of limiting foreign direct investment.

The importance of agriculture to Trump’s trade policy is somewhat unclear. Decades-old disputes with Canada over trade in dairy products are one of the last issues holding up a final deal with the northern partner in NAFTA. The President appears to be willing to accept some political risk with this sector, as China and the EU have both hit traditional US agriculture and food products exports mercilessly in retaliation for US industrial tariffs. The Trump-Juncker understanding had very little substance related to agriculture, instead prioritizing industrial tariffs. Subsequent reports from the European Commission suggest that increased EU purchases of soybeans and beef (notably under a quota system for beef) might be on the table, which would undoubtedly be seen favorably on the US side, especially the agriculture-dominated US Senate. Trump rejected a similar conceptual framework from China, but it was not accompanied by serious proposals on the industrial side or on protection of intellectual property.

As the US-EU talks become more specific and more serious, it is useful to underscore that the vibrant US economy is considered a source of strength and advantage by the President. GDP growth in the third quarter appears to be above 4% as it was in the second quarter. Unemployment indicators are at lows not seen in many decades, wages are starting to grow more quickly and business complains of its inability to find workers to fill openings. Capital investment is strong. New tariffs on US imports and retaliatory tariffs have not at this juncture slowed the economy, although if Trump chooses to impose new 25% tariffs on another several hundred billions of dollars of Chinese goods that result may change. Canada is likely to sign onto the ultimate text of a new North American agreement soon since about 20% of its GDP is exported to the United States. These developments bolster this President’s natural aggressiveness.

Europe is well-advised to move more quickly than it usually does to take advantage of the more positive atmosphere described earlier. Trump is of course famously mercurial and has shown he can change his tactics and goals in an unpredictable fashion. He has also shown he can be flexible and respond to political realities. The President is looking for positive accomplishments like perceived gains in trade agreements before the Midterm elections (including his own in 2020). He does appear to want to clear the playing field with NAFTA, the EU and, hopefully, Japan so that he can concentrate on the more serious threat, China.

Europe should seize the opportunity and act decisively. Its industrial economy is slowing and it needs to head off the threat of the impatient Donald Trump’s potential auto tariffs, which would be devastating to the European economy. Some combination of lower industrial tariffs and harmonized standards in the industrial sector, especially autos, easing of restrictions on agricultural imports, and cooperation on meeting the Chinese challenge might be a good package.

Dr. Duesterberg is a Senior Fellow at the Hudson Institute. Previous positions include: Assistant Secretary of US Department of Commerce for International Economic Policy; President and CEO of The Manufacturers Alliance for Productivity and Innovation; and various positions in think tanks, the U S Congress, and academia.