According to the European Statistical Office in Luxembourg, Germany is, by far, the largest carbon emitter in the EU, with a share of almost 21% of the total emissions in the EU-28.

On a global scale, Germany is among the top ten emitters, precisely the seventh or 2% of the total share, as reported by the World Resources Institute, a global research non-profit organization in Washington.

The air in Germany is definitively polluted. Water vapor, carbon dioxide, methane, nitrous oxide and ozone emitted in Germany’s atmosphere from burning fuel fossil for transportation, industrial processes, electricity and heat production and the effects that these gases have on Germans’ citizens have become a strong requirement for change, a deep need that, whatever it is visceral or celebral, cannot be procrastinated any longer. 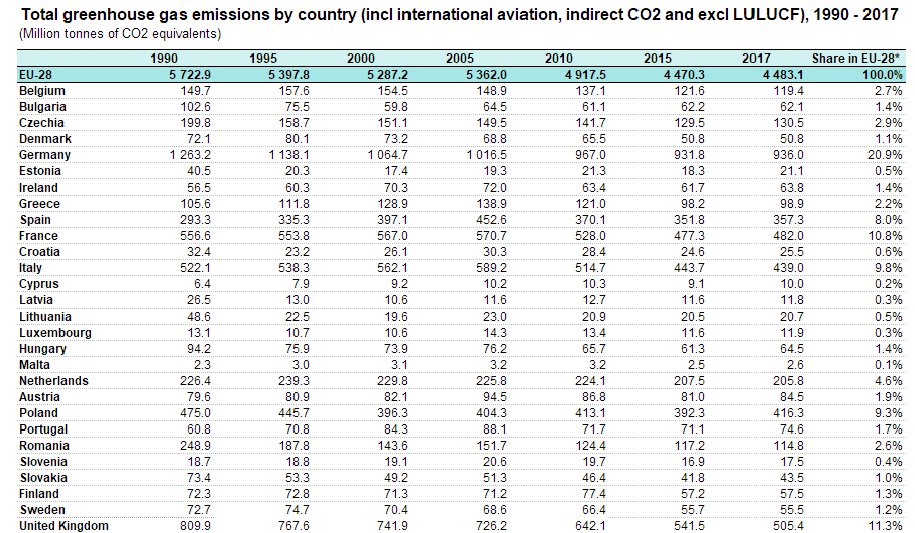 In December 2017, the National Centre for Social Research, Britain’s largest independent social research agency, published a report, after it had examined data collected by the European Social Survey, on the public attitudes towards climate change of 16 European countries along with Russia and Israel.

Of these 18 countries, it was no coincidence that the research agency found that Germans are the most concerned, with 44% being “very / extremely worried” about climate change. At the other end of the spectrum, just 15% of Poles and Estonians have the same feelings of worry. 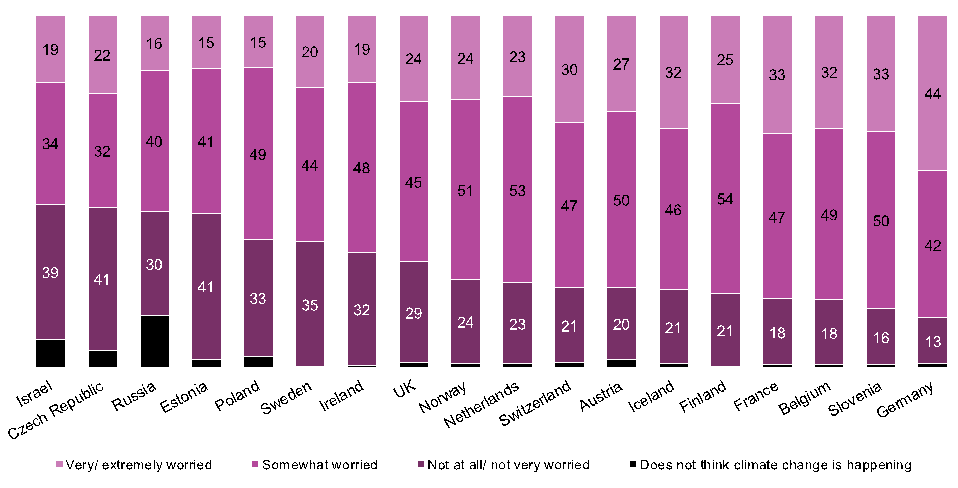 Today, the fight against climate change is clearly at the forefront of public concern in Germany. In May, during the European Parliament election, the results issued by the Federal Returning Officer showed that the Greens supplanted the Social Democrats (SPD) to become the second biggest party after Angela Merkel’s Christian Democrats (CDU/CSU), an extraordinary advance of 10 seats, precisely those that the SPD lost in the same round of voting.

The spectacular progress of the German Greens in the European elections, as well as the recent polls that see them running neck and neck with the center-right Christian democratic political alliance, demonstrates how Germans are willing to make the cause a major priority. The context of the ongoing debate is rather contradictory, however, if we look at the current state of the country’s environmental footprint.

The amount of concern in the country is significant given the current political and public debate that, although contradictory in some circumstances, is centered on pragmatic environmentalism being almost lacking of any ideology or political doctrine. In addition, the drive for a rapid change also comes from the deception and disappointment over the Volkswagen emissions scandal, as well as from the uncertainty associated to the accelerated transition of the automotive industry from the internal combustion engine to the electric motor. The consequent acknowledgment of the German government was not long in coming.

Germany’s climate targets were put on paper in 2007 and have been upheld by all governments since. The 2014 progress report confirmed these 2007 targets, which are subject to an annual monitoring process. In June 2018, the Federal Ministry for Economic Affairs and Energy published the latest monitoring report in which the government set the 2020 emission reduction goal, precisely from the initial 27.3% in 2016 to 40% less greenhouse gases by 2030 compared with 1990, and then progressively -55% by 2030, -70% by 2040 and very ambitiously less than 80% to 95% greenhouse gas emissions by 2050, targets that have remained unchanged up to date. In other words, by the middle of the 21st century, Germany would actually reach carbon neutrality, or have a net zero carbon footprint, by balancing carbon emissions with carbon removal or simply eliminating carbon emissions associated with transportation, energy production, agriculture and industrial processes, and in so doing it would lead the country to a post-carbon economy.

Ahead of the UN climate summit in Paris in 2015, many countries published similar climate action targets, but undoubtedly Germany’s greenhouse gas reduction goal is by far more impressive than the target the European Council set in October 2014: a new 2030 Framework for climate and energy, which aims to achieve a 20% cut by 2020 and a 40% cut by 2030 compared to 1990 levels.

In January, the Economy Minister Peter Altmaier told German broadcaster ARD-aktuell, a working group of public broadcasters, that Germany’s ruling coalition would move quickly to begin implementing the recommendations of a government-appointed commission for exiting coal power by 2038. The plan called for a complete dismantling of the last coal-fired power plants and a closing of coal mining sites by 2038 at the latest, as well as providing at least 40 billion euros in aid to regions affected by the phase-out.

In June 2019, in the latest European summit in Brussels, political leaders sparred over the EU’s role in tackling the unfolding climate emergency, which threatens to significantly worsen the risks of drought, floods, extreme heat, poverty and destruction of wildlife around the world. The plea called for a change of course to achieve net zero carbon emissions by 2050 and specified that leaders should curtail current coal-burning power stations and discontinue new ones beyond 2020. The German Chancellor, Angela Merkel, told her fellow leaders that the EU needed to signal ambition ahead of that summit but a trio of central European countries led by Poland, which has some of the worst air pollution in Europe, blocked the EU from inching closer to a net-zero carbon emissions target for 2050. The countries’ coal accounts for the major share of their electricity generation – up to 80% for Poland. However, Poland’s coal industry has become largely uneconomic with production undercut by cheap imports and high extraction costs, and employment within the sector has dropped 75% since 1989, as reported by the Deutsche Welle Akademie.

While protesters were demonstrating on September 20th in the Friday for Future marches in more than 150 countries to call for action on climate change, the leaders of the grand coalition decided on the most comprehensive climate protection program for Germany so far.

After 19 hours of negotiations, the German government unveiled a 54-billion-euro spending package to reduce carbon emissions, a climate protection program that operates at 360 degrees and at more fronts, from daily little things to long-term big actions, since there is clearly not a one-fits-all solution.

The program includes incentives for climate-friendly individual behavior such as the use of bikes or trains instead of driving cars or household investments such as the renovation of old house with the installation of energy-saving windows, roofs and exterior walls; clear rules that is less ambiguitiy in setting standards by federal and regional governments, associations and manufacturers; CO2 pricing in the transport and building sector, as well as the obligation to continuously review compliance with climate targets, as to make the program socially balanced, ecologically effective and economically meaningful.

The Climate Cabinet believes that the necessary steps to achieve the internationally agreed climate protection targets for 2030 have been taken, that is, a reduction of greenhouse gas emissions by 55% compared to 1990 levels. More specifically, by 2030 the program aims to implement actions such as the expansion of renewable energies to a share of 65% in electricity production by 2030, the extension of the reduction of company car taxation for electric cars in order to reach 7 to 10 million such vehicles in the next 10 years, along with the development of e-charging infrastructure with a goal of 1 million charging points, discounts on train tickets by lowering the VAT to 7% (to bring train travel at 10% of the total), fiscal promotion of energy-efficient building renovation, more federal subsidies for local public transport, such as buses, subways and bike paths, as well as a binding commitment to definitively abandon coal as a combustible material to produce energy.

Phasing out coal-fired power generation is going to be an especially tough challenge, given the current energy mix in the country.

As stated in January 2019, and later confirmed in August, the German government has a plan to phase-out coal-fired power generation by 2038 at the latest by allocating €40 billion in the coal-mining regions for the long-term shaping of structural change, thereby creating new employment and value creation opportunities before the coal-fired generation ends, as a complementary and additional fund to the climate package.

The legislative implementation of the plan to cease using coal in the production of energy is currently under preparation. The aim is to present a draft coal-mining law in the coming autumn as to complete the parliamentary process by the end of 2019. The Federal Government expects to start talks with the European Commission at an early stage in order to explore the state aid framework to ensure that the legal implementation is quickly reached.

The German government, that has defaulted on its climate commitments over last decades and is even among the countries with the highest level of greenhouse gas emissions in the world, has launched one of the most massive plans to contain the effects of climate change, truly with no precedent. Yet almost all national and foreign newspapers, as well as environmental groups and economists, have sharply criticized the government’s plan, some even mocking it.

In the meantime, the Green party, which is today polling at about 22-23%, has gradually eclipsed the Social Democrats as the leading party of the German left.

A poll released by the ARD television channel showed that 63% of German voters see climate change policy as a greater political priority than economic growth.

Skeptics are not aware yet that they may not have the last laugh.

Angelo Richiello is an engineer and director of Zhu+Rich Sagl, a consultancy firm in strategy, development and organization based in the Canton of Ticino, Switzerland. For the past 25 years he has been involved in industrial development projects in Europe, Asia and North America. He also collaborates with magazines, public broadcasters and think tanks on topics such as industry, natural resources, energy and the environment.