The race for Chancellor – a personality or party contest? 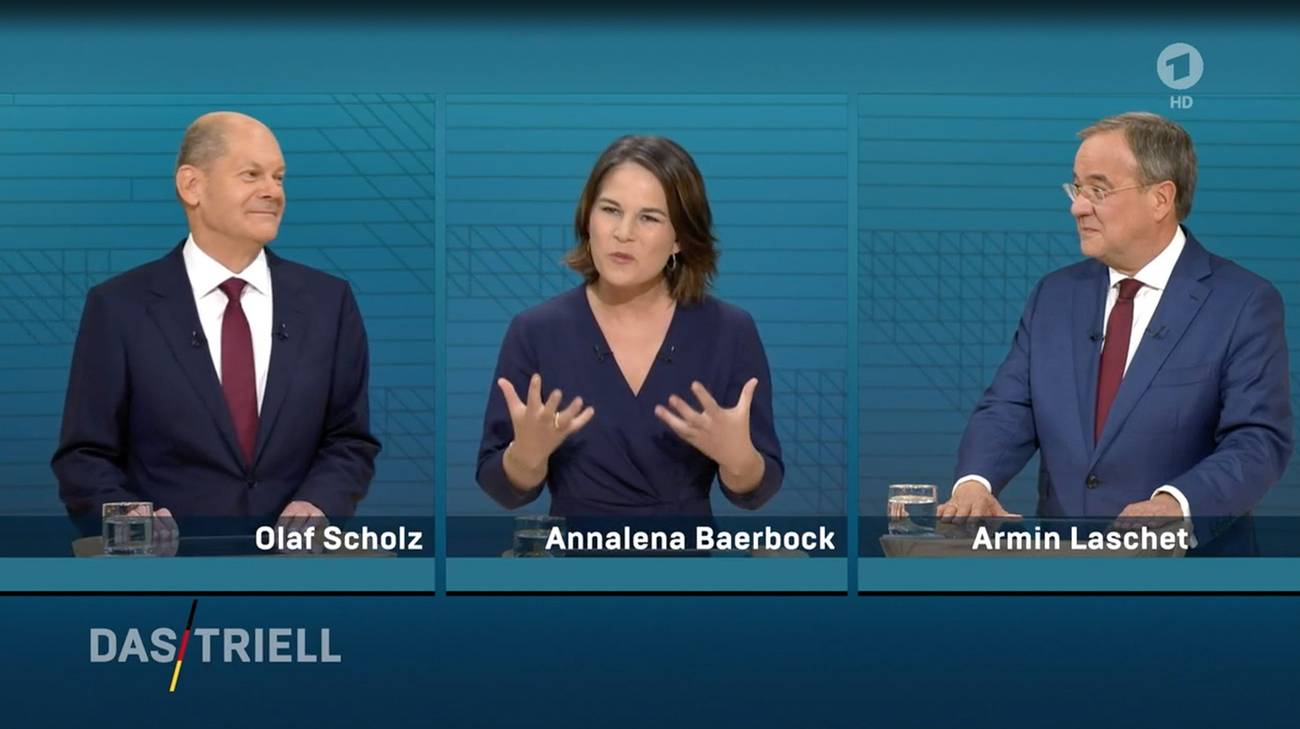 A post-debate survey showed that 36% of viewers said Scholz, who had positioned himself as the incumbent, performed best. He remained calm and detached, which went down well with the audience. After soaring in the polls in the spring, Baerbock claimed 30% of projected debate votes but has had a difficult campaign, which has seen her, and the Greens, fall behind the SPD and CDU/CSU. This is largely due to claims that she embellished her CV, as well as a weak campaign performance over the summer.

Laschet, who is personally unpopular especially after a series of missteps as the country dealt with devastating floods in July, received 25% of the debate votes. Laschet has failed to recover public support following a widely reported campaign mistake in which he was pictured laughing in the background with local officials as German President Frank-Walter Steinmeier gave a speech mourning victims of the deadly floods in western Germany. In addition, Laschet has regularly faced (and rejected) accusations of mishandling the COVID-19 pandemic in his state of North Rhine-Westphalia, where infections are especially high as the fourth wave of the pandemic sweeps the country.

In the second election debate on September 12th Scholz won again as polls by public broadcasters ARD and ZDF found viewers favored him as the “most convincing” candidate, but diverged on whether the CDU’s Armin Laschet or the Greens’ Annalena Baerbock came second. The third and final debate on September 19th, before polling day a week later on September 26th.

Both Scholz and Baerbock suggested they were optimistic their parties could get sufficient seats to form a coalition without the pro-business FDP or the far-left Die Linke. The polls so far do not support their assessment. If The Left (Die Linke) which is hovering around 6% does not win enough votes to pass the necessary 5% threshold, the SPD and Greens would then have a chance of an absolute majority in the Bundestag.

Nominated as a conservative candidate for chancellor in April 2021, Laschet inherited a series of problems including anger over the government’s pandemic management and a corruption scandal involving shady COVID-19 mask contracts. At Germany’s last three regional elections in March 2021, the CDU suffered its worst results ever in Rhineland Palatinate and Baden-Württemberg but bounced back in Saxony-Anhalt.

Following the second television debate, Scholz has been building momentum. In a poll published on September 11th by INSA for Bild on Sunday, he received 31% of the support, while Laschet only had 13%. Baerbock was favored by 14% of respondents.

In another poll published on September 13th by politico the CDU/CSU were down to 21%. This is the lowest percentage they have ever gotten in any national poll. The poll put the SPD at 26%, the Greens at 16%, the liberal Free Democrats (FDP) at 12%, the hard right Alternative for Germany (AfD) at 11%, and the Left party at 6%.

As Germany will decide on September 26th, there is no doubt that Scholz and the SPD’s rise in popularity over the summer have been helped by Baerbock and Laschet’s accident prone campaigns.

If recent polling is correct, the only possible governing coalitions would need three parties to work together. Coalitions of three parties have often been adopted at the state level in Germany, but never at the federal level. While no two-party combination would be capable of mustering the 338 seats needed for a majority, four three-way combinations would be possible:

The “German coalition”: Named after the colors of the parties – the CDU/CSU, SPD and FDP – which reflect those on the German flag. The “Jamaica coalition” – the CDU/CSU, Greens and FDP . Efforts to build a coalition of these parties failed in the wake of the 2017 general election. There is also the possible “Traffic Light coalition” – the SPD, FDP, and the Greens. Finally, there is the possible left-wing or R2G (red-red-green) alliance – the SPD, the Left party, and the Greens. Given the likely complexity, coalition talks could last for months. It is therefore not unrealistic to think that Angela Merkel, rather than her successor, might deliver the chancellor’s traditional New Year’s speech in 2022.

The first television debate of the German election campaign has confirmed that Olaf Scholz and the SPD are in the driving seat. It leaves Armin Laschet’s CDU/CSU with an uphill struggle. The challenge for Laschet is that he has few original policy ideas.

The SPD campaign will likely concentrate on Scholz’s personal popularity with the central message: If you want Olaf Scholz as chancellor, you must vote SPD. German voters are very aware of this fact and appear to be slowly moving in that direction. The pragmatic Social Democrat hopes to succeed Angela Merkel by emulating her and by having the most governing experience. He is projecting the aura of a safe pair of hands which is an attractive proposition post-Merkel.

While German voters may lean towards continuity, the fact is that it would be better for Germany and the EU to have a chancellor who was more proactive than Merkel’s reactive policymaking model, especially on climate change and digital policies which are widely seen as a failure during her time in office. Nevertheless, Merkel has delivered a decent and mature leadership. Angela Merkel remains the most popular policy maker in Germany today, yet her popularity is not carrying through to Laschet or to her party at large.

With the national election approaching, uncertainty and anxiety are prevalent in German politics. Polling is making it unclear which party will lead the next coalition government and which combination of potentially awkward bedfellows that government might include.

Some commentators suggest the Greens, like the CDU/CSU, have chosen the wrong candidate. There is a view emerging that neither Laschet nor Baerbock possess the necessary seriousness or credibility for the office of chancellor. They both have made avoidable mistakes that have greatly benefited the SPD.

Professor John Ryan is a Network Research Fellow at CESifo, Munich, Germany. He is a Senior Partner at a consultancy which advises private and public sector organizations on COVID-19/Brexit contingency planning.