Europe’s economy in 2020 – another crucial year

The deceleration of global growth in 2019 has raised fears that the global economy is on the cusp of slipping into a recession at some point in 2020. Despite some recent positive news coming from short-term indicators of main advanced economies, expectations for 2020 are for a further slowdown of global growth with respect to 2019. Potential global growth has been broadly stable over the last 20 years, at around 2.5% a year, and slightly stronger in the years immediately preceding the financial crisis in 2008 (Figure 1). As illustrated in Figure 1, 2017 and 2018 were rather strong years for the global economy, with actual growth exceeding potential output by 0.6% and 0.4%, respectively. The picture that emerges now is of a global economy reverting to a supply-side-constrained growth rate and not necessarily presaging a recession.

The major factors behind slow growth in potential output are the ageing of population and the slow dynamics of technical progress (measured as total factor productivity). Whether these factors are labelled as “secular stagnation” or “new normal”, the bottom line is that in the current environment policies need to aim at raising potential output via a long-term approach. In other words, traditional fiscal and monetary policies maintain a role in ensuring stability in the short-term but do not have significant impact on economic growth.

During the current slowdown, the world’s central banks have delivered a broad-based policy easing that has been larger than during the previous two mini-downturns of the current cycle (2012 and 2016). Globally, in the third quarter of 2019 alone, 46 central banks slashed interest rates 67 times in response to muted inflation and a synchronized global economic slowdown, while 26 cuts were implemented in Q2 and 19 cuts in Q1 of 2019. In addition to this year’s Federal Reserve rate cuts, advanced economy central banks in the Eurozone, Korea and Australia, among others, have lowered their policy rates. In GDP-weighted terms, the share of these economies that have had policy rate cuts is at its highest since the global financial crisis (see Figure 2).

Still, at 40 basis points, the decline in the aggregate advanced economies’ policy rate from its peak is small, presumably just a further 10bps drop by the end of 2020, boosting the regions’ GDP growth by only about 0.2%. The moderate action by central banks looks set to be supported by a looser monetary policy in emerging markets too. Policy rate moves are a poor guide to the broader monetary policy stance in China, where the People’s Bank of China tends to use various quantitative instruments to influence credit flows. For instance, since the beginning of 2018, it has cut minimum reserve requirements five times, from 17% to 13%, in addition to other policy support. In non-China emerging markets, the proportion of central banks that have recorded policy rate cuts over the past six months is at levels previously seen this century only during periods of major global economic stress.

The unusually large global monetary loosening may halt the downward momentum in early 2020 and is a key factor behind a baseline view of no global recession next year. But limited further central bank wriggle room adds a question mark over the efficacy of monetary policy and means that it is unlikely to deliver a big growth bounce, especially in the advanced economies.

Fortunately, taking into account that some indicators signal that the manufacturing sector may be stabilizing in Q4 2020 and that the full effects of recent policy loosening has yet to filter through to the economy, global GDP growth will reduce steam by only about 0.5% in 2020, probably scoring a growth rate around 2.5%.

The Eurozone is facing a number of economic and political challenges, some inherited from the past, some new. Structural weaknesses are well known and debated and can be summarized as poor governance of institutions resulting in slow decision making – and often in no-decision making. The Five President Report of June 2015 laid out a step-by-step process which is still far from being completed (even on the intermediate milestones scheduled for 2017). The Eurozone is making some important progress, such as on ESM (European Stability Mechanism) and has surprisingly showed a single and robust political position in the Brexit negotiations. However, it is still struggling to find internal agreement on the banking union and the capital markets union, not to mention fiscal and defense union. Growth, stability, employment and environmental sustainability can only suffer from the consequent lack of action. As a result, Euro area countries proceed along very different, sometimes diverging fiscal and growth paths. The outcome so far has been a growing dissatisfaction of the European population, manifested in the growing presence of populist views and political groups.

In the global context of diminishing growth and with the domestic challenges still to be resolved, the Eurozone economy continues and will continue to grow at a weak pace, despite the renewed expansionary monetary policy of the ECB, with policy interest rates in negative territory. The choice of such a bold policy has come under heavy criticism by some Eurozone countries as well as by the banking sector and by many analysts who fear damage to the economic system coming from the moral hazard of governments and businesses relying on prolonged easy credit conditions.

The latest data are showing signs that the Eurozone economy continues to stabilize around current levels but does not offer much hope in terms of a meaningful pick-up. Although the manufacturing PMI rose for a second consecutive month in November, it remains at depressed levels, also because of the technological shift being implemented in several branches of manufacturing in favor of more environmentally sustainable products (for example, the German automotive industry shifting to electric cars). Furthermore, the full-economy PMI fell in the same month, as services activity weakened, and still signals an economy close to stagnation. The main worry for the Eurozone continues to be that the so far resilient service sector may suffer contagion from the weakness seen in the export-oriented manufacturing sector. The external sector is also likely to remain under pressure given the continued uncertainties (Brexit, US tariffs) and the slowing global economy context in 2020. In addition, employment growth has slowed substantially, a trend which will be difficult to reverse in the next few quarters given the subdued forward-looking employment intentions and the lack of substantial labor market reforms in the area.

In a nutshell, Eurozone GDP growth in 2019 appears headed to about 1.2%, before slowing to 1.0% in 2020. To make the outlook even more cloudy, risks for the Eurozone appear skewed to the downside which also affects confidence and growth prospects negatively.

In an effort to position Europe as the world leader in the fight against global warming and at the same time to boost European investment in the environmental field, the new EC President Ursula von der Leyen recently announced a plan for ambitious climate goals, including making Europe carbon neutral by 2050. The Commission will propose the first European “Climate Law” by March 2020 which will include both investment objectives and financing measures. Whatever the plan may be, the first meaningful impact on European growth and employment, whether positive or negative, will be felt in the following years. The implications of the plan are ambitious, especially looking at the (not very realistic) timing of implementation. However, they encompass not only economic and financial factors but span over technological innovation, shifts in business models and quality of life.

Among the new challenges for the Eurozone are the risks from the upcoming Brexit negotiations as well as from potential external shocks such as the political and economic implications of an extended US-China – or a new US-Europe – tariff war or the burst of the US financial market bubble. The coming year may well be the year in which a number of issues come to the fore.

In the light of recent events (and Trump’s tweets) both risks have somehow receded. Nonetheless, concerns about both Brexit and an extended tariff war are not off the table yet. Following the landslide victory of the Tory party, the UK Parliament should be able to sign off on the Withdrawal Agreement in the next few months or even weeks. The uncertainty now is over the detailed negotiations related to the future relationship. The two sides start in the rather unique position of regulatory alignment. In theory, this could make the process easier. But unless the UK is willing to accept tighter restrictions on access to the EU market or the EU is willing to allow special conditions to the UK, it may prove more complicated than expected. Any deal struck also requires the unanimous agreement of the 27 remaining EU countries each of which has specific trade interests to defend. The risk that the so far compact position of the EU may create internal friction and dissatisfaction among domestic stakeholders should not be underestimated.

Last but not least, further trade weakness may materialize in 2020, given the openness of the Eurozone economy. Exports have been a key driver of growth in recent years. A sharp rise in the euro is possible if policymakers abroad become more dovish – the ECB would have very limited room for maneuver from its current negative interest rates. At the same time, a full-blown trade war with the US would be very damaging for Eurozone growth prospects given the impact that trade uncertainty is already having even before significant tariffs have been applied.

In a nutshell, Eurozone prospects for 2020 are rather bleak but the good news is that it seems to be positioning to face the technology and environmental challenges of the future. 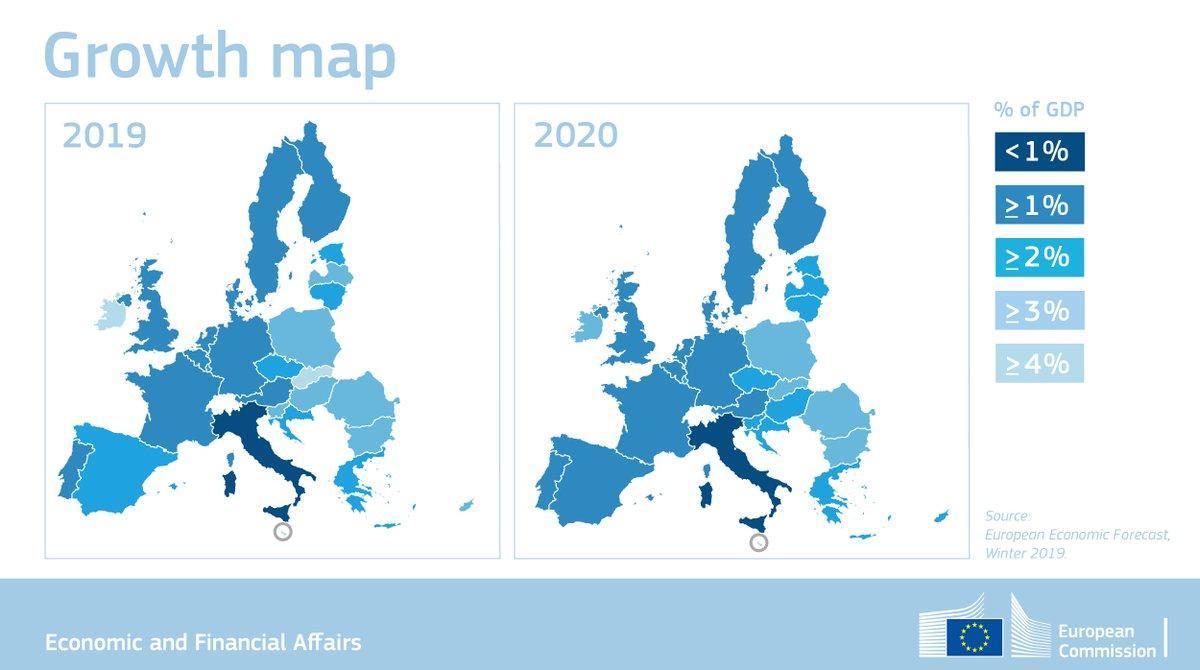