China has transformed itself from a minor economy with little trade with the outside world in the 1970s and early 1980s to the world’s largest exporter and oil consumer, helped by structural reforms and entry into the WTO in 2001. Only the US has a larger economy, $17.4 trillion in 2014 compared with $10.3 trillion. But with its population of 1.4 billion, China is still a relatively poor country with an estimated GDP per capita on a purchasing-power-parity (PPP) basis of $12,879 in 2014. During nearly 20 years of current account surpluses, China has accumulated almost $4 trillion of foreign exchange reserves, equivalent to around 24 months’ import cover. It is now the largest holder of US treasuries and has acquired substantial influence on global capital markets. With this background, a significant crisis in China would have large negative repercussions around the globe.

GDP growth has been remarkably strong and stable over the period of China’s transformation, with the pace typically ranging between 8-10% and growth driven by export and fixed investment. But the credit-fueled investment splurge engineered by the authorities after the 2008 subprime global financial crisis is now taking its toll on growth. The share of investment in GDP has risen to around 46% and returns to investment have fallen sharply in recent years. Furthermore, the real estate sector and several industries are struggling under sizeable excess supply, which translates into banking sector imbalances. At the same time, the government is now focused on raising the domestic consumption rate to compensate for the planned slowdown in investment. Recent policies have included boosting rural incomes and higher spending on health while the “hukou” reform (to change the traditional mode of household registration based on the area of residence) is being pushed forward to allow migrant workers to access social services in the cities they work in. But household savings are still very high, estimated to be around 40% of average income, as the need for precautionary savings is still perceived as a priority by the Chinese population.

The recent turmoil in the Chinese financial markets – particularly acute in the course of the summer – is rooted in the problems underlying the economic readjustment process in China. Recent data releases have been particularly weak, and undoubtedly contributed to increase worries over the sustainability of the process. The August flash manufacturing PMI (Purchasing Manufacturing Index) was the lowest since 2009 and annual export growth (in terms of US dollars) has been negative for five of the last seven months. Officially, industrial output growth slowed to 6% in July from a year earlier, highlighting pressures on the industrial sector from overcapacity in heavy industry and a sharp slowdown in construction-related sectors.

The concern expressed over time by many observers on the quality of the Chinese official statistics are also gaining additional attention. Bottom-up estimates from Oxford Economics (OE) show industrial production growth slowing even more sharply, with annual growth of just 2.2% in the first half of 2015. Other indicators support this pessimistic view such as housing starts (16% lower in H1 2015 over H1 2014), and electricity consumption across all sectors. Car sales in July were 7% lower than a year earlier and smartphone sales have dropped for the first time ever.

The authorities are responding, but, coherently with the investment-consumption rebalancing strategy, they are not going on the same spending spree they did in response to the global financial crisis. Yet another round of monetary easing was announced, on top of the renminbi (CNY) devaluation. Indeed, exports might be another compensating factor to the investment slowdown, although China is already significantly relying on exports, with over a quarter of GDP exported. Exports are dominated by manufactured goods, particularly ICT equipment, industrial machinery, clothing and other textiles. The main markets for Chinese exports are the EU and US, which each account for 17-18% of merchandise exports (the actual figure is probably slightly higher as around 16% of Chinese exports go to Hong Kong, mainly for re-export elsewhere). In 2005, China began a gradual appreciation of the renminbi against the US dollar but this was suspended at the end of 2008 when the global financial crisis hit. The exchange rate has gradually risen again since 2010 and the exchange rate band was widened to 2%. The current account surplus now stands at around 2% of GDP and the exchange rate no longer appears to be significantly undervalued, allowing the Chinese monetary policies to start a new wave of CNY devaluation in mid-August.

In a highly significant move, the People’s Bank of China devalued the renminbi to around 6.4 to the US dollar in August and it has changed the mechanism for setting the daily reference rate. Key factors behind the CNY move were slowing growth and mounting pressure on exports from the significant appreciation of the trade-weighted CNY (up 15% in the year to July). With the trade-weighted CNY only back to its level in March, the authorities will probably allow further currency weakening; in its baseline, OE now forecasts the CNY will fall to 6.7-6.8 by Q2 2016.

Oxford Economics has used its Global Economic Model to evaluate the impact on the global economy of a significant reduction in the growth rate of the Chinese economy, with investment spending decelerating sharply over the course of this year and next. In this scenario, government investment would drop nearly 4% below baseline, as local government scales back new projects. Private investment is also scaled back, and a loss of confidence in the prospects for the economy dampens FDI inflows to 40% below baseline by 2016. The Chinese authorities would respond with a range of actions, made possible by its low fiscal deficit and the large amount of foreign reserves in its possession. The central bank speeds up rate cuts, hitting the zero lower bound by the end of 2016, and allows the currency to weaken substantially. Growth in China slows sharply, declining to 2% in 2016 as investment contracts, and only returns to 5% by 2019. By the end of the decade, GDP is nearly 8% below baseline. 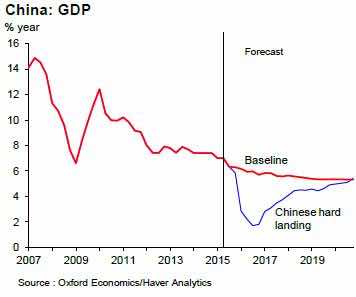 In this scenario, developments in China exert significant downward pressure on the global economy and global bond yields. The slowdown weighs on world trade, commodity prices and other global asset prices – all of which influence monetary policy settings around the world. The ECB would most likely keep the refinancing rate on hold throughout the forecast period, while the Fed would postpone its hiking cycle to the first quarter of 2017 in light of weaker GDP growth and dampened consumer price index (CPI) inflation. Overall, global growth slows sharply, to a rate of only 1.5% in 2016, rather than picking up towards 3%. Inflation pressures ebb and remain in abeyance throughout the forecast period. In part, that reflects sharp falls in commodity prices: oil prices remain around 14% below baseline through the forecast period; metals prices fall to levels last seen in 2004 and remain more than 30% below baseline at the end of the decade. 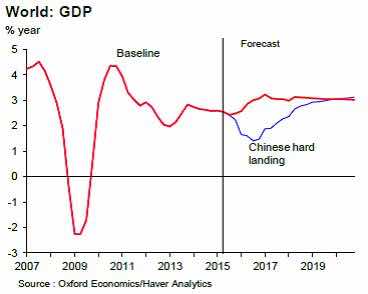 Across emerging markets as a whole, growth slows to 2.1% in 2016, almost as weak as seen in the wake of the global financial crisis, and also advanced economies are not immune: GDP growth in 2016 drops below 2% in the US and 1% in the Eurozone (a loss of 0.5% of GDP each), rather than picking up pace.

In a nutshell, while China had a major role in keeping the World economy afloat during the 2008-09 global crisis, it might end up derailing the global recovery in the next several quarters. In the context of moderate global expansion that appears to be the new “normal” for the years to come, China may not be the bearer of good news.

Russia’s crisis as an opportunity to break with the past