China flexes its military muscles in the Western Pacific

It was just a matter of time until the surging economic capabilities of the People’s Republic of China would translate into more serious military capabilities. After more than two decades of annual (usually double-digit) boosts in defense spending, that time has arrived. China’s new clout is especially evident with the deployment of a modern navy equipped with an array of sophisticated weapons systems. Beijing’s policies in the South China Sea, the Taiwan Strait, and to some extent throughout the Western Pacific, are exhibiting greater assertiveness to match its’s rising military clout. That posture is leading to mounting tensions with the United States and Washington’s East Asian allies. It will be an important challenge for both sides to manage such frictions so that they do not produce a war that would be disastrous for all concerned.

Beijing’s military buildup and modernization has reached the point that US policymakers and defense planners are paying very close attention. The US Defense Intelligence Agency’s 2019 report to Congress concludes that Beijing is building up its ground, air, and naval forces to achieve a more robust capability to invade Taiwan. Some of those moves also apply to China’s ambitions in other areas of the Western Pacific.

China has focused especially on developing potent anti-access, area denial (A2/AD) capabilities in recent years. Deployment of a new generation of anti-ship missiles and torpedoes, surface to air missiles, and aerial defense systems, is central to that strategy. Such weapons increase the vulnerability of US forces if Washington contemplates intervening militarily to prevent a Chinese armed initiative against Taiwan. They also materially reduce the advantage that US naval and air forces currently enjoy in the South China Sea. Beijing’s apparent expectation is that it can raise the risk level to the United States high enough that US leaders will have to reconsider the strategy of maintaining US primacy in the Western Pacific, especially in the Taiwan Strait and the South China Sea.

It is not a far-fetched goal. Some US analysts and pundits believe that Beijing already is becoming America’s full-fledged military peer competitor in the Pacific. That concern seems premature, since it is unlikely that China can hope to match the US militarily on a global basis (or even throughout the Pacific Basin) for several more decades, if then. But matching or even exceeding Washington’s air and naval power throughout the Western Pacific, especially in China’s’s immediate neighborhood, is another matter. Beijing may be very close to achieving that goal already.

As its military power has expanded, China’s behavior has become noticeably more assertive, if not aggressive, in such locales as the East China Sea, the Taiwan Strait, and the South China Sea. In the East China Sea, Beijing is contesting Japan’s control of the Senkaku islands and pressing its own claim to that territory. In addition to national pride, the China’s pressure reflects a desire to control extensive fishing resources and probable oil and mineral wealth in the waters surrounding the uninhabited Senkakus. The Japanese government has refused to budge on the territorial dispute, and Washington firmly backs Tokyo’s position, but officials in both countries are increasingly worried about the extent of Chinese military power in that area. 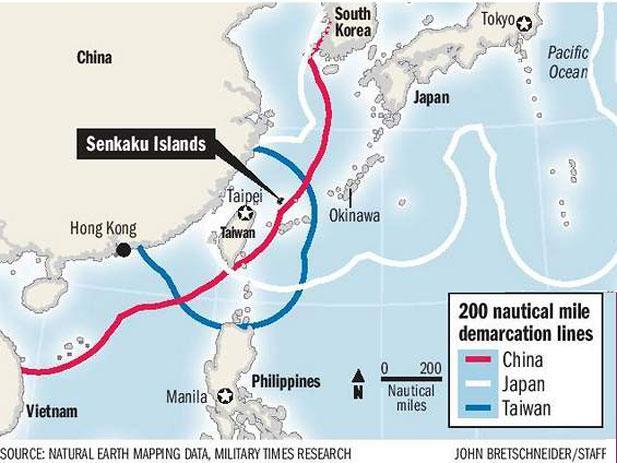 Beijing’s belligerence is even more evident in the Taiwan Strait. China conducted 16 military drills around Taiwan in 2017 alone, compared to just eight in 2016 and even fewer during the previous decade. The accelerated pace continued in 2018 and into 2019. Beijing’s naval and air power war games included having a flotilla led by an aircraft carrier, transit through the Strait. A senior Chinese official, Liu Junchuan, boasted that “the contrast in power across the Taiwan Strait will become wider and wider, and we will have a full, overwhelming strategic advantage over Taiwan.” Speaking on June 1, 2019, at the Shangri-La Dialogue, an annual multilateral conference on Pacific security issues, Defense Minister Wei Fenghe warned against efforts either in Taiwan or foreign countries to thwart China’s goal of reunification. Wei added ominously that, “If anyone dares to split Taiwan from China, the Chinese military will have no choice but to fight at all costs, for national unity.”

In addition to its own accelerated military activities in the Taiwan Strait, China is reacting with more intense hostility to the presence of naval vessels from any other country in those waters. Most of Beijing’s angry protests have been directed at the United States for sending warships through the Strait, but Chinese officials display similar intolerance toward other powers. An especially odd incident occurred in April 2019 when, for reasons not entirely clear, France sent one of its naval vessels through the Strait. Beijing responded with a vitriolic protest. It is increasingly evident that Chinese leaders not only regard Taiwan as part of China, but they consider the Strait to be Chinese territorial waters.

Signs of a more assertive Chinese policy in the South China Sea also are becoming more numerous. China has long made extensive territorial claims in that body of water, but in recent years Beijing has built up several small reefs and islets there and established a naval and air presence. In several cases, the expansion has included the construction of military airstrips. Such construction is not the only sign of Chinese determination to press its territorial claims. Tensions rose sharply when the United States responded to Beijing’s military posturing by conducting “freedom of navigation” naval patrols. China’s protests about such patrols have become increasingly shrill, and China’s warships are now shadowing and harassing the US vessels. There are worrisome threats from the Chinese military hierarchy to escalate the confrontational policy.

Significant obstacles still remain before China can become the dominant military power in the Western Pacific. Not only does the United States still have robust air and naval capabilities there, but key US allies in East Asia, especially Japan, seem to be increasingly uneasy about Beijing’s behavior. Moreover, Washington has quite deliberately sought to change the geographic scope of its policy, including now by referring to the “Indo-Pacific region.” That rhetorical change is a transparent attempt to enlist India and its air and naval capabilities in the Indian Ocean and southwestern Pacific to thwart any Chinese bid for hegemony. Indian leaders have remained cautious about signing on to a US-led containment policy, but they are watching China closely and clearly do not want to see Beijing achieve that status.

Despite such obstacles, China’s military capabilities in the Western Pacific are growing rapidly, and Beijing’s policy ambitions appear to be expanding at a pace to match or exceed those capabilities. It will become more and more difficult for the United States to preserve its military primacy throughout the region. Moreover, the costs and risks entailed in even making the attempt to do so are rising rapidly.

Donald Trump has plenty of space for hawkishness on China

Alexander Hamilton: a guide to US economic rebirth?