America and the pandemic, one year on

Looking at the US and Europe one year after the beginning of the pandemic, the view is sort of unexpected. In some aspects, it is almost a role reversal, due to the new administration’s determination to stay clear of any austerity policies, and invest heavily in recovery. 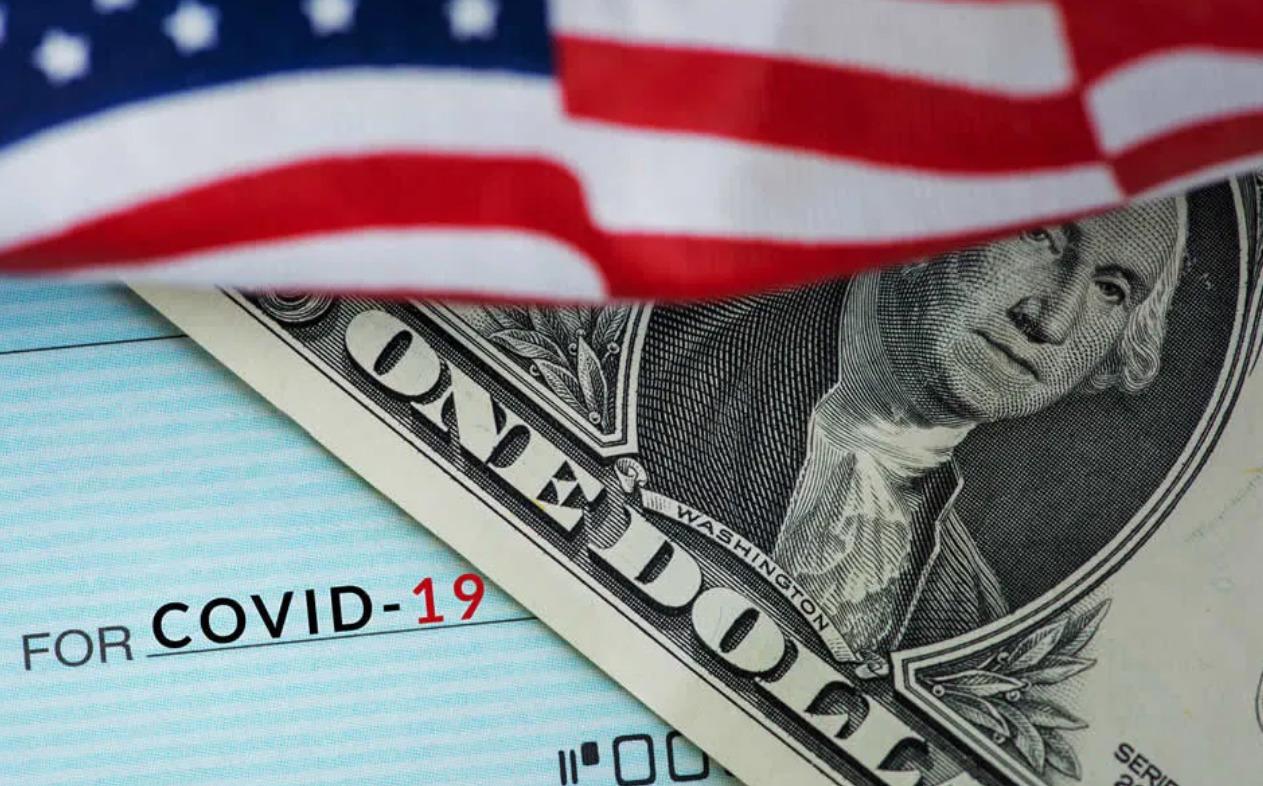 Despite the infamously poor state of the US healthcare system — which ranks 44th in the world according to the World Health Organization, far behind those of European nations —the country administered its COVID-19 vaccines (Pfizer, Moderna and Johnson & Johnson) faster than even the rosiest predictions. Less than two months into his presidency, Joe Biden promised that all Americans who wished to be vaccinated would receive the shots by May. Although there have been hiccups and issues of accessibility, the possibility does not seem far-fetched. By Easter over 100 million people have received at least one dose, close to a third of the population, and about 15% are already fully vaccinated.

By comparison, the European Union’s vaccination effort is hitting one roadblock after the other, with delays in procurement, issues with supply, and most recently the precautionary suspension of the AstraZeneca vaccine by about a dozen countries for a few days. As a result only 6,6% of EU citizens have been fully vaccinated, and 16% had their first dose.

But just as striking is the new stimulus package. The $1.9 trillion American Rescue Plan signed into law on March 11th includes sizeable checks going straight into most taxpayers’ bank accounts. It is notable in absolute terms (bigger than Italy’s GDP for 2020) and as a percentage of the country’s GDP, measuring more than 27%. By comparison, Germany, the EU country that had the largest stimulus package compared to the size of its economy, spent 20%.

While the size of the stimulus package is relevant, it is the way it is structured that makes the US plan look like the kind of interventions one would expect from a European country.

First, it is cash in hand. More than 80% Americans, or all those earning under $80,000, will receive a $1,400 check (less for those making between $75,000 and $80,000), and about half of them already received their money only days after the stimulus was signed into law. This is the third check since the pandemic began, after $1,200 and $600 were sent by the Donald Trump administration with the first and second stimulus bills passed last year. That was only the beginning. Qualifying families will also get $1,400 for each dependent — something that was not included in the previous packages.

But there is another part of the stimulus that is important: Money for childcare. Each qualifying family will receive up to $3,600 a year per child in what is technically a tax credit. However, rather than being deducted from the tax return, forcing families to front expenses until they get the cash back, the money is sent ahead of time.

This is not just an expansion of the existing child tax credit, both in the amount and the percentage of families covered (an estimated 75%). It is a small form of guaranteed basic income for families with children — the first in US history, and a step toward radical anti-poverty policies, that feels closer to progressive European measures.

During his primary run, Biden emerged as a more conservative candidate in a pool where many opponents — including Elizabeth Warren, Bernie Sanders and Julián Castro — ran on more progressive platforms. Some of their proposals, for instance, Medicare for All (which Biden does not support), or student debt cancelation (which the President has considered, but for relatively small amounts), remain too progressive for the current administration. But the design of the stimulus package shows the influence of the growing push for a more social democratic approach within the Democratic Party — which was responsible for some of Biden’s policy proposals during the campaign.

As the first main act of the new administration, the package sets the tone for the next four years — and for a presidency that enjoys the respect, and even support, of many Republican voters, while it is positioning itself far away from conservative interests.

The priorities of this package, in fact, are remarkably different from the CARES act, passed during the Trump administration, which at $2 trillion was similar in size. The 2020 package, too, included stimulus checks for instance — up to $1,200 per qualifying individual — but the eligibility threshold included individuals making up to $99,000 (House Democrats would have kept a similar threshold with higher checks but the Senate imposed lower limits.) Significantly, however, the previous measure gave only $500 per dependent, and no checks for children. Unemployment support, too, is more substantial for people making less than $150,000 (who will not have to pay taxes on unemployment).

Unlike the CARES package, which had set aside a $500 billion aid for big businesses, Biden’s plan gives the bulk of the money to families and small businesses, with only 4% of the budget left for big businesses (compared to 31% of the first Trump package, and 37% of his second, according to an analysis by The Washington Post). The package also expands the number of people eligible for the Medicaid public health insurance. 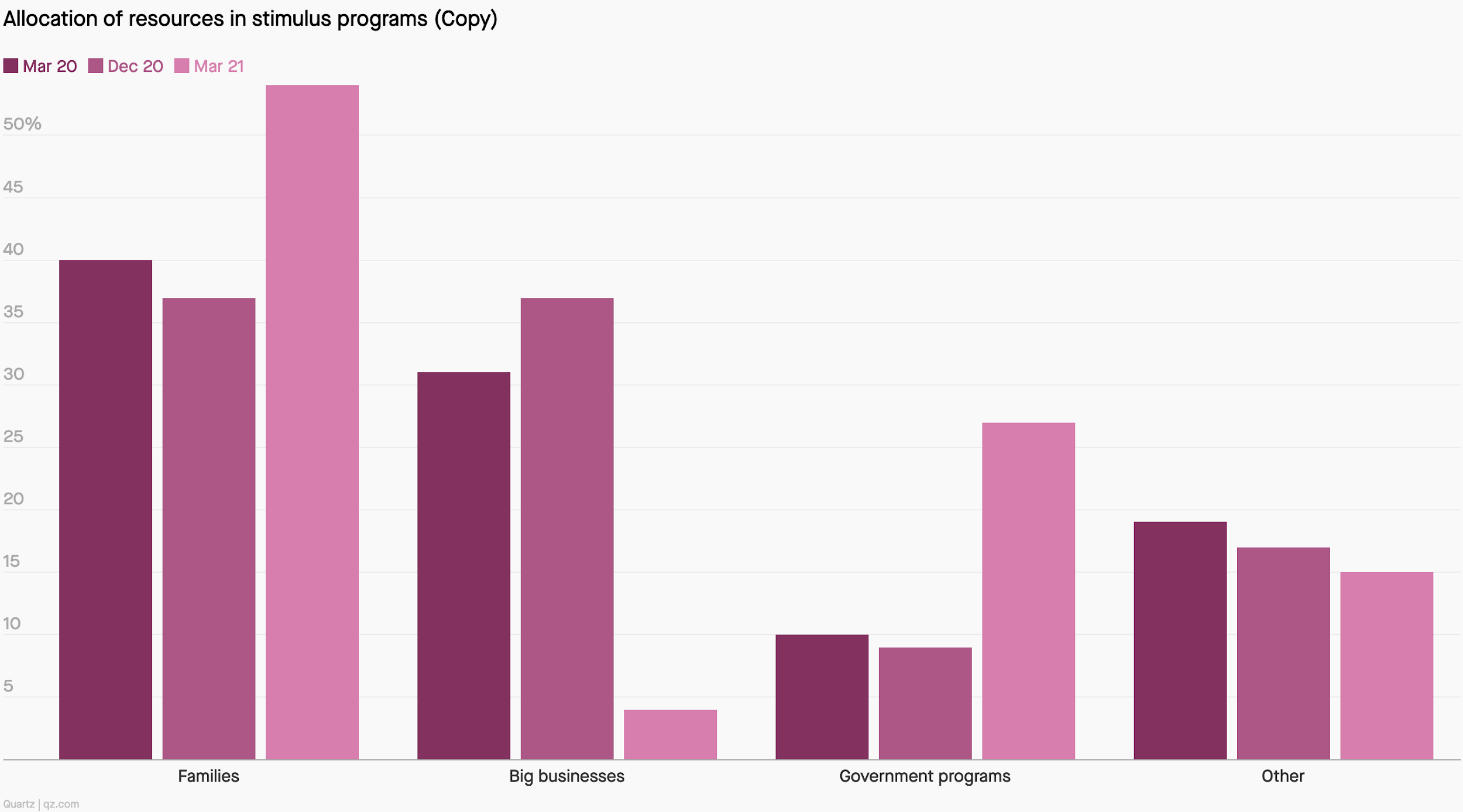 Overall, this is a very aggressive intervention deployed in a short time frame; by comparison, the relief after the recession was about $1.8 trillion over several years. The hope is it will stave off poverty for a larger percentage of America, and many advocates seem hopeful that it will, particularly thanks to the measures introduced for children.

There are, of course, concerns connected to the size of the stimulus, and not just among those who do not look so positively over the government’s hand replacing the invisible one of the market (Republicans did not vote for the package in the Senate). Among them, one of the main concerns is that such an injection of cash into people’s pockets might lead to high inflation, although early indicators show that may not be the case. Inflation is projected to rise, but it is likely going to be a short-term problem, and a sign of the economy growing again, with better employment and higher salaries.

If the job numbers coming out after the package was passed are any indication, America is optimistic about the future. In the month of March, the US added nearly a million new jobs, although experts warn that even at this pace, full recovery could still take years.

The EU and Covid vaccines: the jury is still out