A look at the 2019 global slowdown

As often happens when financial markets are subject to sharp sell-offs, concerns about global growth have mounted in the last several weeks. This is especially due to the sell-off being accompanied by (and probably due to) a rash of negative soft and hard data releases from a significant number of countries relevant to global growth.

It is much too early to be thinking about a world recession. Although most institutions and research centers have become more cautious, the consensus is still for a global growth moving ahead at a reasonable pace just below 3% over 2019. The World Bank, for example, has moderated its 2019 global growth expectations from 3% to 2.9%, while Oxford Economics is now forecasting a less optimistic 2.7%. However, downside risks to growth have risen and a return to the mediocre global growth of 2.4% seen in 2016 might be a serious risk.

Markets have certainly begun to take a more pessimistic view of the global growth outlook on the back of concerns for the US economy. Indeed, at face value, the near inversion of the US yield curve is worrying. While in mid-December the Fed raised the central bank rate to 2.5%, at the end of January the 10 year government bond had a 2.63% yield with the 10 year vs one year bond spread at just 8 basis points (source: US Department of Treasury, Resource Center). In other words, the yield curve is flat, and has been for several weeks, a situation that many market analysts typically consider a warning sign for an upcoming recession, or at least of a significant slowdown of the US economy. After all, the yield curve has inverted ahead of the past seven US recessions, although the time between inversion and economic slowdowns is not immediate. As Brian Chappatta of Bloomberg notes, “the yield curve from three to five years dipped below zero during the last cycle for the first time in August 2005, some 28 months before the recession began.”

World growth was already showing weakening signs before the financial market sell-off that began last September. Trade growth slowed during 2018, stabilizing at a subdued level over recent months, while survey-based investment indicators have slumped. Recent economic data confirmed that the 2018/Q3 economic soft patch appears to have spilled over into Q4, particularly in the industrial sector which has seen a broad-based loss of momentum in many economies.

However, a set of data and considerations alleviate concerns and confirm that fears over the global expansion being on its last leg are overdone. In most countries the service sector looks more robust than in the months leading to the 2016 slowdown, higher consumer confidence is generally higher than two to three years ago, while recent asset price moves do not show a clear negative direction. On a global basis, credit conditions are mixed with bank credit standards easing in the G7 between Q3 and Q4 2018, but tightening in emerging markets. While surveys of service sector activity have also moderated, the falls have been rather less abrupt than generally expected.

Although the financial market sell-off and associated tightening in financial conditions will impinge on growth, this is likely to be to a large extent offset by weaker inflation in response to lower oil prices, now seen at around US$60 per barrel in 2019. All these factors, combined with the continued strength of labor markets and the likelihood of further moderate wage growth, point to continued solid household spending growth, suggesting that overall global GDP growth is slowing albeit not alarmingly so.

On balance, the weaker data do not provide compelling evidence that global growth is slowing enough to warn of a global recession or a sharp slowdown such as that of 2016. This view is reinforced by looking at the outlook for the major countries/areas in the world.

In the US, the strong fiscal boost of the last two years allowed to further lengthen the already long growth cycle, now standing at 99 uninterrupted months, the longest on record. In the next quarters, however, fading fiscal stimulus and tighter financial conditions will contribute to annual GDP growth slowing from 3.1% in Q4 2018 to around 2% by Q4 2019 – still a not worrying rate of growth. The US economy added a huge 312,000 jobs in December, indicating that the labor market will remain healthy with limited impact on wage growth and inflation. On January 30th, the FOMC (Federal Open Market Committee of the FED) signaled a pause in rate hikes coming forward. On top of that, Chair Jerome Powell insisted during a press conference that the “case for raising interest rates has weakened” due to global crosscurrents and muted inflation. The policy statement and Powell’s comments are unambiguously dovish for monetary policy, and bullish for the equity and bond markets. The Fed is likely to be more flexible in its tightening policy and to hike rates only once this year, most likely by 25bp sometime in Q3. While this dovish move will be beneficial for the growth of the US economy, it also represents recognition that a US slowdown is to be expected.

In the European Union, recent data have been quite disappointing as subdued external demand has weighed on the region’s output and undermined sentiment. However, some of the slowdown is related to one-off factors such as the “gilet jaunes” protests in France, the production cuts in the German car sector due to changes in emission regulation and the production and logistic problems in Germany caused by the Rhine draught. The GDP of the European Union has slowed down during the last quarter of 2018  to 1.5%year-on-year, from 1.8% in the third quarter. Nevertheless, while the annual GDP figures for Germany indicate slow growth in Q4 (but not a recession), the Q4 GDP figures show that France proved more resilient than expected, having increased by 0.3% over the quarter, with net trade as the main driver. Spain continues to be a strong performer, registering Q4 GDP growth of 0.7% q/q, up from 0.6% q/q in Q3. Growth was driven by strong exports (1.9%) and robust consumer spending (0.5%). Italy is the most worrying of the big European countries, having entered into recession with two negative consecutive quarters. The comment from ISTAT that net trade gave a positive contribution to growth implies that domestic demand was subdued, on the back of lowering sentiment indicators, especially manufacturing confidence and now also households. Italian growth in 2019 is now expected to be approximately flat. 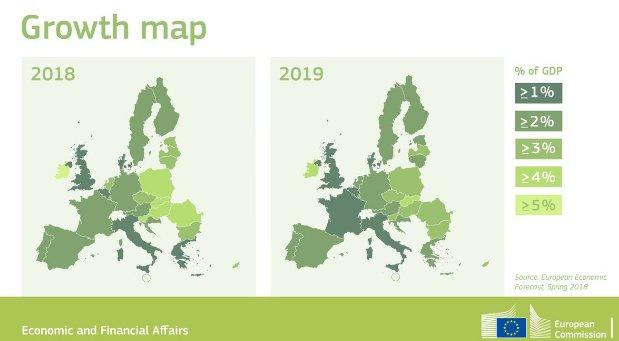 In a nutshell, as the one-off problems appear to have been resolved, and on the back of a recovery in domestic demand based on signs of stronger wages, lower inflation and a significant fiscal boost (especially in Germany), European growth should hover around 1.5%, just below the 1.8% registered in 2018 overall.

Turning to China, economic growth slowed further in Q4, amid weakening external and internal demand. Growth is likely to remain under pressure at the start of 2019, but find a floor around Q2 in response to an increasing array of growth-supporting measures. Overall, GDP growth is expected to slow to 6.1% this year from 6.6% in 2018. Key risks are trade tensions with the US and a continued tight stance vis-à-vis shadow banking and local government debt. The latest PMI surveys indicate further weakening in industrial activity in December, although the services sector held up well, suggesting that also in China overall growth is not falling sharply.

Recent announcements and statements following December’s Central Economic Work Conference (CEWC) signaled no major shift in macro policy stance. But policymakers have moved to a more growth-supporting macro stance than in 2018. The latest fiscal and monetary steps include a further 100 basis point cut in reserve requirement ratios, new urban railway projects and a quota for local government bond issuance in 2019, which should speed up infrastructure investment. Policymakers will aim to halt the slowdown, rather than try and engineer a significant pick-up in growth.

The gradual policy easing should help China’s GDP growth bottom out around Q2 2019 and would allow economic growth to be in line with a target likely to be set at “6.0%-6.5%”, after “around 6.5%” in 2018. The Central Economic Work Conference (CEWC) gave a mandate for more fiscal and monetary support in 2019 as downward pressure on growth increases. But the desire not to “overdo” it will continue to shape the extent of policy easing.

Plenty of risks but no panic

While the baseline assumption for 2019 is for a bearable deceleration of the global economic activity, the risks of a sharper slowdown have risen. Cyclical risks have increased over the past couple of years as spare capacity has diminished and uncertainty over the economic and financial market impact of the unwinding of central balance sheets have added to the risk of policy mistakes. The geopolitical front remains full of risks, such as the chances of a no-deal Brexit, a widening of the trade war with the looming threat of US tariffs on European cars.

In conclusion, all major areas appear to be in a slowdown mood, affecting the growth of the rest of the world through the weakening global trade channel and falling sentiment. Nonetheless, barred some risks that could indeed derail world growth, it is still early to call for a significant slowdown and it is even more unlikely that the world would fall into a recession in 2019.

The rise of complexity and the fall of decision-making